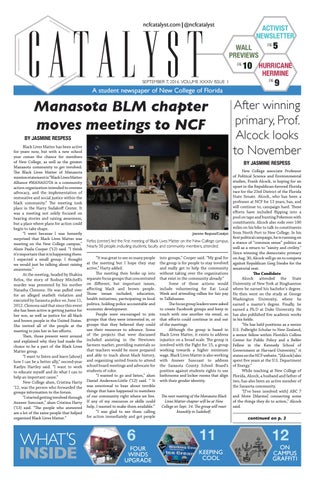 Manasota BLM chapter moves meetings to NCF BY JASMINE RESPESS Black Lives Matter has been active for years now, but with a new school year comes the chance for members of New College, as well as the greater Manasota community to get involved. The Black Lives Matter of Manasota mission statement is “Black Lives Matter Alliance #MANASOTA is a community action organization intended to oversee advocacy, and the implementation of restorative and social justice within the black community.” The meeting took place in the Harry Sudakoff Center. It was a meeting not solely focused on hearing stories and raising awareness, but a place where plans for action could begin to take shape. “I went because I was honestly surprised that Black Lives Matter was meeting on the New College campus,” Alum Paula Cooper (‘12) said. “I think it’s important that it is happening there. I expected a small group. I thought we would just be talking about raising awareness.” At the meeting, headed by Shakira Refos, the story of Rodney Mitchell’s murder was presented by his mother Natasha Clemons. He was pulled over for an alleged seatbelt violation and executed by Sarasota police on June 11, 2012. Clemons said that since this event she has been active is getting justice for her son, as well as justice for all black and brown people in the United States. She invited all of the people at the meeting to join her in her efforts. Then, those present went around and explained why they had made the choice to be a part of the Black Lives Matter group. “I want to listen and learn [about] how I can be a better ally,” second-year Kaelyn Hartley said. “I want to work to educate myself and do what I can to help an important cause.” New College alum, Cristina Harty ‘12, was the person who forwarded the groups information to the forum. “I started getting involved through Answer Suncoast,” alum Cristina Harty (‘13) said. “The people who answered are a lot of the same people that helped organized Black Lives Matter.”

New College associate Professor of Political Science and Environmental studies, Frank Alcock, is hoping for an upset in the Republican-favored Florida race for the 23rd District of the Florida State Senate. Alcock, who has been a professor at NCF for 13 years, has, and will continue to, campaign hard. These efforts have included flipping into a pool on tape and hunting Pokemon with constituents. Alcock also rode over 100 miles on his bike to talk to constituents Jasmine Respess/Catalyst from North Port to New College. In his first political campaign, he is running on Refos (center) led the first meeting of Black Lives Matter on the New College campus. a stance of “common sense” politics as Nearly 50 people, including students, faculty and community members, attended. well as a return to “sanity and civility.” Since winning the democratic primary “It was great to see so many people into groups,” Cooper said. “My goal for on Aug. 30, Alcock will go on to compete at the meeting but I hope they stay the group is for people to stay involved against Republican Greg Steube for the active,” Harty added. and really get to help the community senatorial seat. The meeting then broke up into without taking over the organizations The Candidate separate focus groups that concentrated that exist in the community already.” Alcock attended the State on different, but important issues, Some of those actions would University of New York at Binghamton affecting black and brown people. include volunteering for Eat Local where he earned his bachelor’s degree. Those issues included, education, Week and attending rallies for fair pay He then went on the study at George health initiatives, participating in local in Tallahassee. Washington University, where he politics, holding police accountable and The focus group leaders were asked earned a master’s degree. Finally, he economic development. to create Facebook groups and keep in earned a Ph.D at Duke University. He People were encouraged to join touch with one another via email, so has also published five academic works groups that they were interested in, or that efforts could continue in and out in his fields. groups that they believed they could of the meetings. “He has held positions as a senior use their resources to advance. Some Although the group is based in U.S. Fulbright Scholar to New Zealand, of the projects that were discussed Black Lives Matter, it exists to address a senior fellow within Florida’s Collins included assisting in the Newtown injustice on a broad scale. The group is Center for Public Policy and a Belfer farmers market, providing materials so involved with the Fight for 15, a group Fellow in the Kennedy School of that teachers would be more prepared working towards a higher minimum Government at Harvard University,” it and able to teach about black history, wage. Black Lives Matter is also working states on the NCF website. “[Alcock] also and organizing united fronts to attend with Answer Suncoast to address spent five years at the U.S. Department school board meetings and advocate for the Sarasota County School Board’s of Energy.” students of color. position against students rights to use While teaching at New College of “I wanted to go and listen,” alum bathrooms and locker rooms that align Florida, Alcock, a husband and father of Daniel Anderson-Little (‘12) said. “ It with their gender identity. two, has also been an active member of was emotional to hear about terrible the Sarasota community. things that have happened to members “[I’ve been involved with] ABC 7 of our community right where we live. The next meeting of the Manasota Black and Mote [Marine] connecting some If any of my resources or skills could Lives Matter chapter will be at New of the things they do to action,” Alcock help, I wanted to make them available.” College on Sept. 14. The group will meet said. “I was glad to see them calling biweekly in Sudakoff. for action immediately and got people continued on p. 3