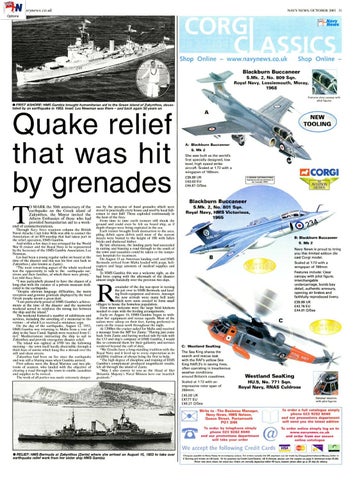 • FIRST ASHORE: HMS Gambia brought humanitarian aid to the Green island of Zakynthos, devastated by an earthquake in 1953. Inset: Les Newman was there - and back again 50 years on

Quake relief that was hit by grenades

She was built as the world's first specially designed, low level, high speed strike aircraft. Scaled at 1.72 with a wingspan of 180mm.

Blackburn Buccaneer O MARK the 50th anniversary of the earthquake on the Greek island of Zakynthos, the Mayor invited the Athens Embassies of those who had provided humanitarian aid to a weekend of commemorations.

Through Navy News reunions column the British Naval Attache Capt John Wills was able to contact the Association of an RN warship that had taken part in the relief operation, HMS Gambia. And within a few days it was arranged for the World War II cruiser and the Royal Navy to be represented by the Secretary of the HMS Gambia Association, Les Newman. Lcs had been a young regular sailor on board at the time of the disaster and this was his first visit back to Zakynthos ( also known as Zante). "The most rewarding aspect of the whole weekend was the opportunity to talk to the earthquake survivors and their families, of which there were plenty," Les told Navy News. "I was particularly pleased to have the chance of a long chat with the curator of a private museum dedicated to the earthquake. "Despite obvious language difficulties, the warm reception and genuine gratitude displayed by the local Greek people meant a great deal. "I am particularly proud of HMS Gambia's achievements at the time of the disaster and the memorial weekend served to reinforce the strong ties between the ship and the island." The weekend featured a number of exhibitions and services, including the unveiling of a memorial to the victims - of which Les received a miniature copy. On the day of the earthquake, August 12, 1953, HMS Gambia was returning to Malta from a tour of duty in the Suez Canal. Signals were received from Cin-C Mediterranean instructing the ship to sail to Zakynthos and provide emergency disaster relief. The island was sighted at 0700 hrs the following morning - the town itself hardly discernible through a thick haze of smoke which hung like a shroud over the still and silent streets. Zakynthos had been on fire since the earthquake and was still a blazing mass when Gambia arrived. First ashore were the Royal Marines and two platoons of seamen, who landed with the objective of clearing a road through the town to enable casualties and supplies to be moved. The work of all parties was made extremely danger-

ous by the presence of hand grenades which were stored in practically every house and used by local fishermen to stun fish! These exploded continuously in the heat of the fires. From time to time earth tremors still shook the ground and could even be felt on board ship, as if depth charges were being exploded in the sea. Each tremor brought fresh destruction to the area, piling debris upon debris until most of the narrow streets were buried to the height of 10ft with fallen bricks and shattered timber. By late afternoon, the landing party had succeeded in cutting and blasting a road through to the south of the town and casualties could be taken to the temporary hospitals for treatment. On August 15 an American landing craft and HMS Bermuda arrived from Malta loaded with jeeps, helicopters and large amounts of medical supplies and food. To HMS Gambia this was a welcome sight, as she had been coping with the aftermath of the disaster almost single-handedly over the previous two days.

emainder of the day was spent in turning the job over to HMS Bermuda and landing fresh equipment and stores. Amongst the new arrivals were many bell tents which were soon erected to form small villages to house the homeless population. Even more welcome were the large field kitchens needed to cope with the feeding arrangements. Early on August 16, HMS Gambia began to withdraw her equipment and rescue squads. Most of the sailors were asleep on their feet, having preferred to carry on the rescue work throughout the night. At 1200hrs the cruiser sailed for Malta and received a message from the MP for Zantc: "Having just come back from Zante and having worked side-by-sidc with the CO and ship's company of HMS Gambia, I would like to commend them for their gallantry and services rendered beyond the call of duty. "We Greeks have a long-standing tradition with the Royal Navy and it lived up to every expectation in its infallible tradition of always being the first to help. "The high degree of discipline and training of HMS Gambia's complement produced magnificent results, felt all through the island of Zante. "May I also convey to you as the Head of Her Britannic Majesty's Naval Mission here our heartfelt gratitude."

C: Westland SeaKing The Sea King shares the search and rescue task with the RAF's yellow Sea King HAR.S's in saving lives, often operating in treacherous weather conditions around Britain's coastlines. Scaled at 1:72 with an impressive rotor span of 260mm.

To order online simply log on to www. n a vy news .co.uk and order from our secure online catalogue

We accept the following Credit Cards • RELIEF: HMS Bermuda at Zakynthos (Zante) where she arrived on August 15, 1953 to take over earthquake relief work from her sister ship HMS Gambia

Cheques payable to Navy News to accompany orders. For orders outside the UK payment can be made by Cheque/International Money Order in £ Sterling and drawn on UK bank. Or for payment by Credit Card/Switch, UK & Abroad, please use the coupon on page 4, (minimum order £5.00). Please note: items shown not actual size. Orders are normally dispatched within 48 hours, however please allow up to 28 days for delivery.