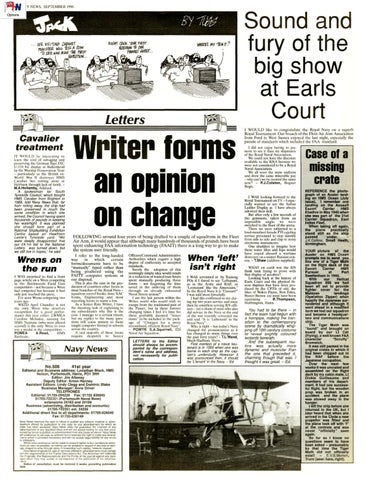 Sound and fury of the big show at Earls Court

Letters treatment IT WOULD be interesting to learn the cost of salvaging and preserving the German Type IXC U-534 for display at Birkenhead by the Warship Preservation Trust - particularly as the British exWorld War II destroyer HMS Cavalier lies rotting away at Hebburn through lack of funds. M.A.Hollamby, Ashford. A spokesman for South Tyneside Council, which bought HMS Cavalier from Brighton in 1988, told Navy News that, far from rotting away, the ship had been preserved in much the same condition in which she arrived, the Council having spent thousands of pounds in keeping her watertight. It was planned she should form part of a National Shipbuilding Exhibition Centre based on Hawthorn Leslie's Tyneside yard. "We were deeply disappointed that our ÂŁ4.1m bid to the National Lottery was turned down, but we still live in hopes," he said.

Wrens on the run I WAS surprised to find a front page article on a Wren competing in the Brickwoods Field Gun competition - not because a Wren had competed but because it had only just reached the press. I've seen Wrens competing two years ago. WSTD April Chandler is not the only Wren who deserves recognition for a good performance this year either. LWMEA Caroline Mclndoe, running for HMS Neptune (who were placed second) is the only Wren to ever win a medal in the competition. POMEA A.Read, HMS Battleaxe.

Writer forms an opinion on change FOLLOWING around four years of being drafted to a couple of squadrons in the Fleet Air Arm, it would appear that although many hundreds of thousands of pounds have been spent enhancing FAA information technology (FAAIT) there is a long way to go to make the system user friendly. I refer to the long-handed way in which certain forms/documents have to be "manually" typed rather than being produced using the FAITT computer systems at our disposal. This is also the case in the production of countless other forms in most branches of the Royal Navy squadron record books, most NAC forms, Engineering and most reporting forms to name a few. As a Senior Rate Writer, I have the daunting task of explaining to my subordinates why this is the case. I manage to a certain extent, but my replies to the many questions still cause anxiety to those taught computer literacy in schools across the country. A vast majority of these forms require despatch to Senior

Editorial and Business address: Leviathan Block, HMS Nelson, Portsmouth, Hants, PO1 3HH Editor: Jim Allaway Deputy Editor: Anton Hanney Assistant Editors: Lindy Clegg and Dominic Blake Business Manager: Anne Driver TELEPHONES Editorial: 01705-294228 Fax: 01705 838845 01705-722351 (Portsmouth Naval Base) extensions 24163 and 24194 Business (advertising, distribution and accounts): 01705-722351 ext. 24226 Additional direct line to all departments: 01705-826040 Fax: 01705-830149 Navy News reserves the right to refuse to publish any editorial material or advertisement offered for publication or any copy for any advertisement for which an order has been accepted. Navy News does not guarantee the insertion of any advertisement in any specified issue and will not accept liability for any loss occasioned by failure to publish an advertisement from any cause whatever. Navy News will endeavour to set copy as ordered, but it reserves the right to make any amendments which it considers necessary and will not accept responsibility for any errors or omissions. Whilst every endeavour will be made to forward replies to box numbers to advertisers as soon as possible, no liability can be acepted in respect of any loss or damage alleged to arise through delay in forwarding such replies, however caused. Description of goods for sale or services offered in advertisements must comply with the requirements of the Trades Descriptions Act. The Advertiser will indemnify the Proprietor, the Representatives and the Printer of the journal against any damages which they may sustain in consequence of the publication of his advertisement. Notice of cancellation must be received 5 weeks preceding publication date.

Officers/Command Administrative Authorities which require a high degree of conformity to accepted standards. Surely the adoption of this seemingly simple idea would result in a reduction of wasted man hours spent manually producing these forms - not forgetting the time saved in the ordering of them through an already exhausted Naval Stores system? I am the last person within the Writer world who would wish to escape from the traditional past of the Pusser, but in these forever changing times I feel it's time for these probably deemed "lesser items" to be included in the package of "Changes for a more streamlined, efficient Royal Navy". - POWTR S.A.Squirrell, 820 Naval Air Squadron. LETTERS to the Editor should always be accompanied by the correspondent's name and address, not necessarily for publication.

When 'left' isn't right I WAS screamed at by Training POs if I dared to say 'Leftenant, as in the Army and RAF, or 'Lootenant' like the Americans." In the Royal Navy it is 'Ltenant!" I was told most forcefully. I had this confirmed to me during my two years service and since then by countless serving RN officers - yet a chum of mine who also did service in the Navy at the end of the war recently corrected me and said "It is 'Leftenant' in the Royal Navy". Who is right - has today's Navy changed the pronunciation as it has changed so many things over the past forty years? - T.L.Wand, Much Hadham, Herts. First mention of a naval lieutenant is in 1580 when one was borne in each ship as the captain's understudy. However it was pronounced then, it should be t'tenant' in the Navy. - Ed

I WOULD like to congratulate the Royal Navy on a superb Royal Tournament. Our branch of the Fleet Air Arm Association from Ford in West Sussex enjoyed the last night, especially the parade of standards which included the FAA standard. I did not enjoy having to pay more to see it than my shipmates of the Royal Naval Association. We could not have the discount available to the RNA because we were not considered to be a Royal Naval Association. We all wore the same uniform and drew the same miserable pay - why can't we be treated the same now? - P.J.Colston, Bognor Regis. I WAS looking forward to the Royal Tournament on TV -1 especially wanted to see the Sultan Ladder Display as I have always admired their skill. But after only a few seconds of the gymnasts, taken from an impossible angle, we were switched to the floor of the arena. There we were subjected to a loud-mouthed female PTI cajoling service personnel to step daintily from side to side and clap to noisy electronic instruments. One shudders to imagine how these water lilies and fops would have coped aboard a wartime destroyer on a winter Russian convoy. -T.Shaw (address supplied). WHAT on earth was the RN think tank trying to prove with that display of aerobics? Looking back at the history of Earls Court and the physical fitness displays that have been produced by the CPTIs of old, the likes of Waker Payne, Ron Eden, Buster Brown etc must have been squirming. R.Thompson, Stubbington, Hants.

You had to be there - in fact the team had begun with a hornpipe, making the transition to the contemporary scene by dramatically whipping off 19th century costume to reveal brightly coloured leotards beneath. And the subsequent routine was actually more dynamic and muscular than the one that preceded it, charming though that was. I thought it was great. - Ed.

Case of a missing crate REFERENCE the photograph of an Auster landing on HMS Ocean (July issue), I remember one landing on the Assault Escort Carrier HMS Khedive in May 1945 when she was part of the 21st Carrier Squadron, East Indies Fleet. When taking off again, the plane practically stood still as the ship passed under. J.K.Collins, Small Heath, Birmingham. YOUR picture of the Auster on HMS Ocean prompts me to send you this one of a Tiger Moth on the flight deck of the Escort Carrier HMS Pursuer at Port Swettenham In 1945. With our Hellcat Squadron 898 we had been all set to provide fighter cover for the Malayan landings (Operation Zipper) when happily the Japanese surrendered and although it went ahead in a modified form we lost our squadron and became a headquarters and communications ship. The Tiger Moth was "found" and brought on board by our Lt Cdr (Flying), a well known FAA character "Scruffy" Bromwich. It was still packed in the original crates in which it had been shipped out to the RAF before the Japanese occupation. Over the next few weeks it was uncrated and assembled on the flight deck by my cabin mate, Lt Dickie Guilleaume and members of his department. It had one successful flight, but the wooden prop was broken in an accident and the plane was stowed away in the hanger. I left the ship before she returned to the UK, but I later heard that when she arrived in the Clyde a new propeller was fitted and the plane took off with 'F' at the controls and was never "officially" seen again. So far as I know no questions seem to have been asked - presumably by that time the Tiger Moth did not officially exist! - E.V.B.Morton, Truro (seen here, right).