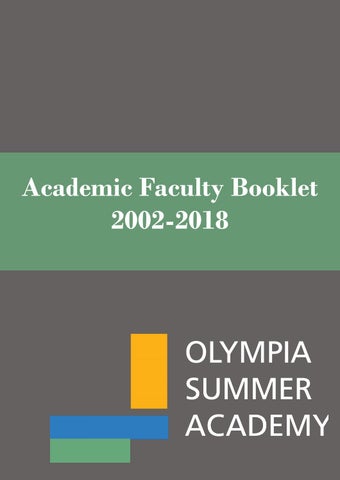 Since the summer of 2002, the Olympia Summer Academy (the Academy) has been offering annually a wide range of specialized courses in Political Science and International Studies. From 2002 until 2014, the Academy took place at the birthplace of the Olympic Games in Ancient Olympia in Western Peloponnese. In 2015, the Academy moved to Nafplio, the first capital of modern Greece, and a picturesque seaport town in Eastern Peloponnese where the medieval meets the modern. Nonetheless, we remain strongly committed, and indeed thankful, to Olympia both for its warm hospitality during the first thirteen years of the Academy and its guiding flame and spirit that will always remain with us. During the course of these years, the Academy has acquired a stellar reputation not only for its high academic standards but also for its distinct identity that blends effectively the scholarly exchange with the friendly atmosphere, thus providing participants with the opportunity of a multicultural and holistic academic experience. So join us and benefit from: a faculty at the cutting edge of academic research, a worldwide scholarly network that each year brings together a highly diverse and talented group of about 100 graduate students and professors from more than 30 countries, a program with a tremendous social dynamic and friendly atmosphere, where the intellectual bonds and relationships formed during its course continue long after its conclusion, and a picturesque venue where the medieval meets the modern. The Academy is co-organized by the Navarino Network, a public policy initiative based in Thessaloniki, Greece, and the European International Studies Association (EISA), with the support of numerous universities and foundations, including Yale University, the University of St Andrews, and the Institute of International Relations at Panteion University of Athens. The Academy has been generously sponsored by the A. G. Leventis Foundation, the Paul & Alexandra Canellopoulos Foundation, the Konrad Adenauer Stiftung, the Alpha Bank and, in the past, by the Ministry of Foreign Affairs of Greece, Titan Cement S.A., the North Atlantic Treaty Organization (NATO), and the National Bank of Greece. Between 2002 and 2008, the Olympia Summer Academy relied exclusively on the generous support of the Kokkalis Foundation.

Gladstone Professor of Government, Department of Politics and International Relations at the University of Oxford, and fellow of All Souls College

I can frankly say that the Olympia Summer Academy (OSA) has been one of the most rewarding academic experiences of my career. Let me briefly explain why. Dimitris Keridis first invited me to deliver a lecture in a seminar on Balkan Studies that met in Ancient Olympia, in 2002. I found the setting (which I did not know) spectacular, and so when he asked me to design a course that could be incorporated in the seminar during following year, I obliged with pleasure. Sixteen years later, this initial collaboration has grown into a real institution that has shaped the career paths of tens of students and convinced me that Greece can be the setting of academic activities that meet the highest standards. OSA is small program and it runs on a shoestring, but it is significant in at least two respects. First, it is a place of academic exchange and activity that brings together top international faculty and top international students for an intense ten days. I have had the privilege to see students deciding to follow the Ph.D. path during the course of these ten days who are now faculty in top universities internationally. The experience, in other words, is transformative and this is due to the combination of the academic culture fostered by the Academy, the quality of the people involved, and the magic of Greece. Because the program runs with consistency and quality for sixteen years, the reputation it has achieved is stellarâ&#x20AC;&#x201D; and I am extremely proud about it. Second, this is a program has helped turn these students and faculty into long-term friends of Greece. It is no exaggeration to say that their experience has marked them in multiple ways. Many keep returning. This is an important social capital, even if its scale is small. Overall, the OSA experience has convinced me that small interventions can achieve big results in Greece. In fact, this type of example can help us rethink how to restructure Greek higher education.

My involvement with the Olympia Summer Academy (OSA) started in 2008, when Stathis Kalyvas invited me to teach at the OSA. At the time, I was a postdoctoral fellow at the Barcelona Institute for International Studies (IBEI) and Stathis a member of its international advisory board. Since then, and upon my return to Greece, the annual OSA has been for me the highlight of the year. It is not difficult to see why. First, and contrary to established international summer programs, OSA did not have the support of a prestigious academic institution. Thus, our challenge was to establish our own niche and reputation. Due to our commitment to high academic standards and a successful balance between the “school” and the “summer” element, we were able to develop a distinct OSA identity and a stellar reputation. Yet, during the last decade, there is a mushrooming of summer programs. This intense global competition keeps us annually on the edge in a productive way. Second, the OSA is a first class venue of professional socialization and networking for students and faculty alike. Indeed, it is no accident that the two biggest collaborative projects that I am currently involved in are OSA by-products. The SAGE Handbook of the History, Philosophy and Sociology of International Relations - that I co-edit with two former OSA visiting professors - grew out of the OSA seminar on the History and Philosophy of International Relations, while the Oxford Handbook of Terrorism – that I co-edit with Stathis and two more former OSA visiting professors - grew out of the OSA seminar on Terrorism and Counterterrorism. The third reason for which OSA is the highlight of the year is because it gives me the opportunity to interact with excellent students from a wide range of countries and with richly varied backgrounds. Something that, along with the beautiful setting and the stimulating programs, make each OSA a truly memorable experience. For all this reasons, I am particularly proud to be part of what we call the “Olympia family”.

â&#x20AC;&#x153;The Olympia Summer Academy offers the perfect mix for an amazing experience: a world-class faculty, smart and engaged students, a top-notch team of organizers and a beautiful location. What else could someone ask from a summer seminar?â&#x20AC;? Antonio Barroso Senior Vice President and Deputy Director of Research, Teneo Intelligence

“The Olympia Academy provides a unique opportunity for graduate students and faculty to engage in debate on international politics across various subdisciplnes in the field. Attended by PhD/Master’s candidates from top-ranked institutions in the U.S. and Europe, the course I convened on Europe’s Shifting Order helped us jointly explore the multiple crises bedevilling the EU of today, from Brexit and the eurozone’s troubles to the rise of revisionist Russia and the turmoil in the Middle East and North Africa. It was a week of intense and mutually enriching discussion, helping us learn from each other. I can truly say that my time in Nafplio was an inspiration for my work as researcher and educator.” Dimitar Bechev Visiting Scholar, Center for European Studies, Harvard, and Director, European Policy Institute, Sofia

“Take a group of well qualified students from across the world. Combine with political scientists and historians who are leaders in their various fields. Add intensive classes, cultural visits and enjoyable leisure. Set it all within the beautiful and historic Nafplio, first capital of modern Greece. Result: a remarkable educational experience known as the Olympia Summer Academy.” John Breuilly Professor of Nationalism and Ethnicity, London School of Economics

“The 2012 summer program on the “History & Philosophy of IR” was an immersive experience that topped, for faculty and students alike, just about anything we might have experienced in our scholarly pursuits. For four days, we dug into challenging material with an energy and intensity rarely matched in other settings for more than brief intervals. Superb organization, an idyllic location, students with diverse backgrounds, and plenty of off-duty face-time made the experience even more memorable.” Nicholas Onuf Professor Emeritus of International Relations, Florida International University, and Professor Associado de Relações Internationais, Pontifica Universidade Católica do Rio de Janeiro

“The Olympia Summer Academy combines access to high-end scholarship in international relations, political violence and political risk assessment with cultural and recreational activities in Nafplion and the surrounding areas. It achieves an exquisite balance between the activities within and outside the seminar halls.” Harry Papasotiriou Professor of International Politics, Panteion University, and Director of the Institute of International Relations, Athens “Ten days in the Peloponnese was a reminder of what is important in life: the pursuit of knowledge; fine dining, in particular old goat; morning swims; and the company of intellectually curious and fun-loving people. Teaching alongside Stathis Kalyvas was a tremendous privilege.” Emma Sky Senior Fellow, Jackson Institute for Global Affairs, and Director, Maurice R. Greenberg World Fellows Program, Yale University

University of Illinois at Urbana-Champaign

The University of Sheffield

University of California at Irvine

Toulouse School of Economics, The Complutense University of Madrid Institute for Advanced Study in Toulouse

The University of Sheffield