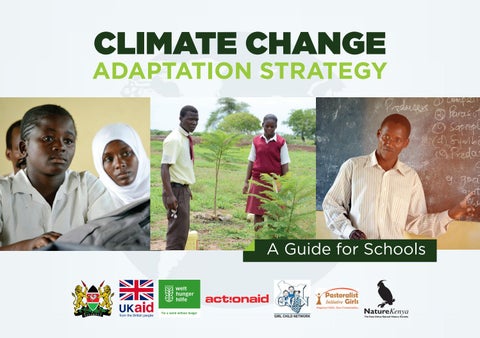 A Guide for Schools

limate Change is a major issue of our time. In the past few years, temperatures all over the world have become a little hotter. The ice at the North Pole and South Pole and snow capped mountains is slowly melting. The sea level has risen. There has been an increase in heavy rainfall, frequent droughts, and violent storms.

Scientists think these changes are partly because of human actions. When we burn fossil fuels such as petroleum, the gas carbon dioxide is produced. Cattle, rice paddies and ploughing new land produce methane gas. Today we produce so much carbon dioxide and methane that natural habitats such as forests, grasslands and wetlands cannot absorb them all.

Carbon dioxide and other greenhouse gases in the atmosphere trap heat, keeping the earth warm.

Some sunlight that hits the earth is reflected. Some is absorbed and becomes heat.

During the day the sun warms the Earth, and at night the heat escapes back into space. Today, however, carbon dioxide, methane and other gases are forming a layer above the Earth. This layer of gases traps some of

limate change has many impacts on natural ecosystems, agriculture, food supplies, human health, forestry, water resources, energy use, and transportation. Droughts, floods and the resulting conflicts over resources are threatening childrenâ&amp;#x20AC;&amp;#x2122;s rights to education, health, clean water and food. This has affected school enrollment, retention and completion. Urgent action on climate change is needed to allow children to survive and flourish today and in the future. This Climate Change Adaptation Strategy Guide will offer school administration and County education officials approaches to make the education system adaptive and resilient to impact of climate change. An aerial view of a flooded village in Garsen, Tana River County. Photo by Associated Press

Identify Actual and Potential Hazards &amp; Impacts of Climate Change on the Site Schools are negatively impacted by climate change both directly and indirectly. Direct effects include flooding and droughts, the associated damage to infrastructure, agriculture and livestock, and a rise in diseases.

Where possible, this assessment should bring together community members, local stakeholders, scientists, and government officials. Together they can discuss the climate change impacts in the region and predict future effects. This will help the school to plan on the best adaptation strategies.

Climate change also impacts on the natural environment and biodiversity that supply essential services to people. Biodiversity includes animals, plants and micro-organisms, the genes within them, the ecosystems in which they live, and the interactions among them. Some of the services we get from biodiversity are food, water catchment, soil improvement and erosion control and protection from storms.

Some questions to be answered include: â&amp;#x20AC;˘ What are the main hazards or dangers in your area? Is it drought, floods, conflict between farmers and pastoralists, rivers changing course, soils becoming salty, human-wildlife conflict, storms from the sea, or salt water in the wells? â&amp;#x20AC;˘ How do these hazards impact on local communities, including the education system? â&amp;#x20AC;˘ What do you see as the future for the environment in your area? Will it become so dry that crops and livestock die and wild animals move away? Will flooding force people to move to another area?

Each school can carry out a participatory climate change vulnerability assessment. This is a process to identify the impacts of climate change on their community and the biodiversity around them.

and the environment give us many other services, including pollinating our crops, controlling pests, absorbing carbon dioxide and moderating the climate. Natural areas are also spaces for tourism, wildlife viewing and meditation.

Will people move if salt water comes up in the wells? Or will people be able to store flood waters and improve farming? Who will be most affected by these changes? Will it be Farmers? Pastoralists? Fishermen? Wildlife? Which habitats in the environment will be most affected by climate changes? Is it forests? Grassland? Wetlands? The sea? What actions can be taken to deal with the hazards?

Examples of climate adaptation strategies include: • Harvesting rainwater. If the school has a metal roof, add gutters and a storage tank to harvest rain water. The stored water is clean water. • Protecting and restoring mangroves. Mangrove forests grow where fresh water meets salt water. There are large stands of mangroves in the Tana Delta. Mangroves protect the shore from storms and sea surges. Mangroves also shelter the eggs and young of many fish and other marine species on which we depend for food and income. Local communities can reduce their vulnerability to coastal erosion and storm surges, and improve fish stocks, by protecting mangrove forests.

Climate change education is an important adaptation measure, teaching children the skills they need to cope with a changing climate. Adapting to climate change means changing some of the ways we do things. It also means conserving the environment around us. The natural environment to provides us with clean air, water, good soil. Biodiversity

water, and release it slowly. Wetlands in Tana River County are important grazing areas during the dry season. Farmers also cultivate the shores of wetlands as they dry during the dry season. Schools can protect wetlands by planting native vegetation. It is also good to control access by livestock to reduce trampling. Promotion of conservation agriculture. Conservation agriculture disturbs the soil as little as possible. It uses mulching to reduce drying and weeds. Crop rotation is used to keep enough minerals in the soil. Adding value to crops or livestock. Milk from livestock can be sold in towns, as fresh milk or fermented as yogurt. Fresh vegetables such as tomatoes and onions sell well in the markets. Planting trees at school and at home. Trees provide shade, hold the soil, clean the air, and can later be used for wood. Planting alone is not enough, however; the young trees need to be cared for.

Protect them from grazing animals with a fence of thorny branches or rubbish. To water trees, fill an old plastic bottle with water and bury it upside down next to the tree. Encouraging farmers to try small-scale irrigation. Fruits and vegetables such as tomatoes can be grown with a little irrigation or waste water from the home. Starting Environmental clubs to build awareness about the environment and climate change. Contact the Wildlife Clubs of Kenya for information on starting Wildlife Clubs. Relocating the school to a better site. This is an extreme measure, only to be done if flooding is identified as a serious and recurring problem.

Climate change mitigation refers to actions to reduce greenhouse gas emissions. Schools can use energy saving devices such as biogas and solar panels instead of charcoal or kerosene. Natural forests, grassland and wetlands absorb the carbon dioxide in the air, thus slowing climate change. Reforestation projects: Plant indigenous trees in degraded forest land – in areas that previously had trees on them. Plant acacias where acacias have been cut down to make charcoal. Grasslands and wetlands are natural habitats, too. There is no need to plant trees there. However, you can plant trees to form a fence between farms; or to make a line of trees linking patches of forest.

Choose the most appropriate adaptation methods. Then prioritize which methods to employ first.

Plant trees on farms or schools to provide fruits and wood. This also reduces the pressure on natural habitats.

Reduce use of firewood and charcoal. This will reduce the production of carbon dioxide. • Use new technologies to save energy. Schools can use biogas to cook in the kitchen. At home, families can use energysaving jikos such as rocket stoves. • Use solar panels to light the classrooms and charge computers. There are programmes in Kenya to buy a solar panel by paying a little each month by mobile phone. • Use Solar cookers and solar water heaters

While climate change may cause disruption to children’s schooling, education is a vital tool in tackling climate change. Basic climate change monitoring can be used as part of the teaching curriculum. Basic climate data to be collected includes daily rainfall and minimum and maximum temperatures. To implement this, establishment of simple “weather stations” can be done. The weather stations will also act as a teaching aid for schools, thus enriching the education and outreach activities.

Change in the way people do things is best done in a participatory manner. Suggested primary stakeholders for schools are: • •

How to make a simple rain gauge using recycled materials: What you will need: • An empty plastic bottle (1 or 2 litre soda or water bottle is good) • Scissors • Sticky tape such as electrical tape • Ruler • Paper • Pencil What to do: 1. Cut around the plastic bottle about two thirds of the way up. 2. Turn the top part of the bottle upside down. Place the top part inside the bottom part so that the cut ends meet. 3. Fix the two parts together using sticky tape such as electrical tape 4. Make a scale in centimeters on a piece of tape, using a ruler; and fix it to the side of your bottle. 5. Find a place outside and away from trees to put your rain gauge. 6. Dig a hole and bury your rain gauge so that the top is sticking out about 5 cm out of the ground. This will stop the rain gauge from blowing down on windy days. 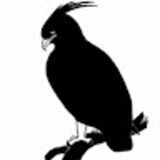