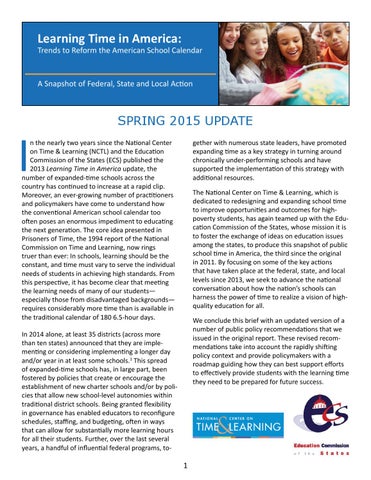 A Snapshot of Federal, State and Local Action

n the nearly two years since the National Center on Time &amp; Learning (NCTL) and the Education Commission of the States (ECS) published the 2013 Learning Time in America update, the number of expanded-time schools across the country has continued to increase at a rapid clip. Moreover, an ever-growing number of practitioners and policymakers have come to understand how the conventional American school calendar too often poses an enormous impediment to educating the next generation. The core idea presented in Prisoners of Time, the 1994 report of the National Commission on Time and Learning, now rings truer than ever: In schools, learning should be the constant, and time must vary to serve the individual needs of students in achieving high standards. From this perspective, it has become clear that meeting the learning needs of many of our students— especially those from disadvantaged backgrounds— requires considerably more time than is available in the traditional calendar of 180 6.5-hour days.

gether with numerous state leaders, have promoted expanding time as a key strategy in turning around chronically under-performing schools and have supported the implementation of this strategy with additional resources. The National Center on Time &amp; Learning, which is dedicated to redesigning and expanding school time to improve opportunities and outcomes for highpoverty students, has again teamed up with the Education Commission of the States, whose mission it is to foster the exchange of ideas on education issues among the states, to produce this snapshot of public school time in America, the third since the original in 2011. By focusing on some of the key actions that have taken place at the federal, state, and local levels since 2013, we seek to advance the national conversation about how the nation’s schools can harness the power of time to realize a vision of highquality education for all. We conclude this brief with an updated version of a number of public policy recommendations that we issued in the original report. These revised recommendations take into account the rapidly shifting policy context and provide policymakers with a roadmap guiding how they can best support efforts to effectively provide students with the learning time they need to be prepared for future success.

In 2014 alone, at least 35 districts (across more than ten states) announced that they are implementing or considering implementing a longer day and/or year in at least some schools.1 This spread of expanded-time schools has, in large part, been fostered by policies that create or encourage the establishment of new charter schools and/or by policies that allow new school-level autonomies within traditional district schools. Being granted flexibility in governance has enabled educators to reconfigure schedules, staffing, and budgeting, often in ways that can allow for substantially more learning hours for all their students. Further, over the last several years, a handful of influential federal programs, to-

Fueled by policy action at the federal, state and local levels, the number of expanded-time schools has doubled over the past two years. Schools with redesigned and expanded schedules are now serving over one million students in predominantly urban communities across the country. For the first time, expanded-time district schools outnumber expanded-time charter schools, making district schools a majority of the more than 2,000 expanded-time schools that are providing students with more time to accelerate academic growth and enable a well-rounded, enriching education.