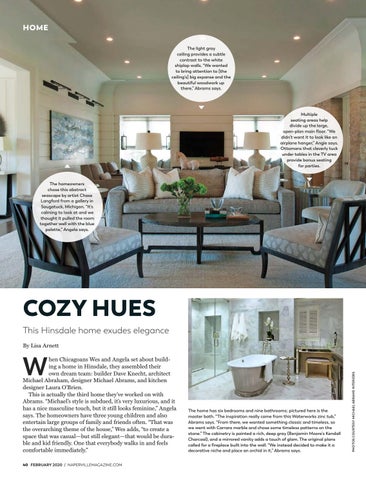 HOME The light gray ceiling provides a subtle contrast to the white shiplap walls. “We wanted to bring attention to [the ceiling’s] big expanse and the beautiful woodwork up there,” Abrams says.

Multiple seating areas help divide up the large, open-plan main floor. “We didn’t want it to look like an airplane hanger,” Angie says. Ottomans that cleverly tuck under tables in the TV area provide bonus seating for parties.

The homeowners chose this abstract seascape by artist Chase Langford from a gallery in Saugatuck, Michigan. “It’s calming to look at and we thought it pulled the room together well with the blue palette,” Angela says.

hen Chicagoans Wes and Angela set about building a home in Hinsdale, they assembled their own dream team: builder Dave Knecht, architect Michael Abraham, designer Michael Abrams, and kitchen designer Laura O’Brien. This is actually the third home they’ve worked on with Abrams. “Michael’s style is subdued, it’s very luxurious, and it has a nice masculine touch, but it still looks feminine,” Angela says. The homeowners have three young children and also entertain large groups of family and friends often. “That was the overarching theme of the house,” Wes adds, “to create a space that was casual—but still elegant—that would be durable and kid friendly. One that everybody walks in and feels comfortable immediately.” 40 FEBRUARY 2020 / NAPERVILLEMAGAZINE.COM

The home has six bedrooms and nine bathrooms; pictured here is the master bath. “The inspiration really came from this Waterworks zinc tub,” Abrams says. “From there, we wanted something classic and timeless, so we went with Carrara marble and chose some timeless patterns on the stone.” The cabinetry is painted a rich, deep gray (Benjamin Moore’s Kendall Charcoal), and a mirrored vanity adds a touch of glam. The original plans called for a fireplace built into the wall. “We instead decided to make it a decorative niche and place an orchid in it,” Abrams says.

As a sister pub of Chicago magazine, Naperville is the premier lifestyle publication of Chicago's west suburbs. Our readers look to us for the latest news and trends in wellness, philanthropy, shopping, dining, fashion, and recreation. Naperville magazine has the LARGEST DISTRIBUTION (45,000 copies) and BROADEST REACH (150,000 readers) in the area, making it the number-one premium advertising vehicle for affluent suburban readers. 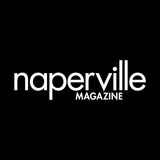