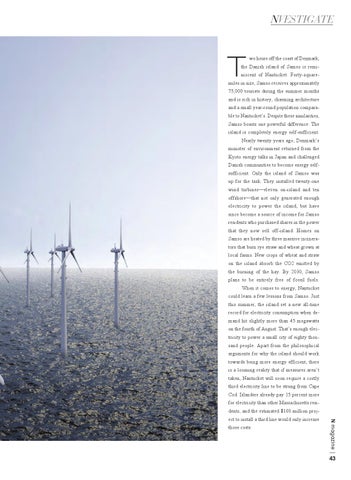 wo hours off the coast of Denmark, the Danish island of Samso is reminiscent of Nantucket. Forty-squaremiles in size, Samso receives approximately 75,000 tourists during the summer months and is rich in history, charming architecture and a small year-round population comparable to Nantucket’s. Despite these similarities, Samso boasts one powerful difference: The island is completely energy self-sufficient. Nearly twenty years ago, Denmark’s minister of environment returned from the Kyoto energy talks in Japan and challenged Danish communities to become energy selfsufficient. Only the island of Samso was up for the task. They installed twenty-one wind turbines—eleven on-island and ten offshore—that not only generated enough electricity to power the island, but have since become a source of income for Samso residents who purchased shares in the power that they now sell off-island. Homes on Samso are heated by three massive incinerators that burn rye straw and wheat grown at local farms. New crops of wheat and straw on the island absorb the CO2 emitted by the burning of the hay. By 2030, Samso plans to be entirely free of fossil fuels. When it comes to energy, Nantucket could learn a few lessons from Samso. Just this summer, the island set a new all-time record for electricity consumption when demand hit slightly more than 45 megawatts on the fourth of August. That’s enough electricity to power a small city of eighty thousand people. Apart from the philosophical arguments for why the island should work towards being more energy efficient, there is a looming reality that if measures aren’t taken, Nantucket will soon require a costly third electricity line to be strung from Cape Cod. Islanders already pay 15 percent more for electricity than other Massachusetts residents, and the estimated $100 million projthose costs.

ect to install a third line would only increase 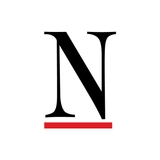