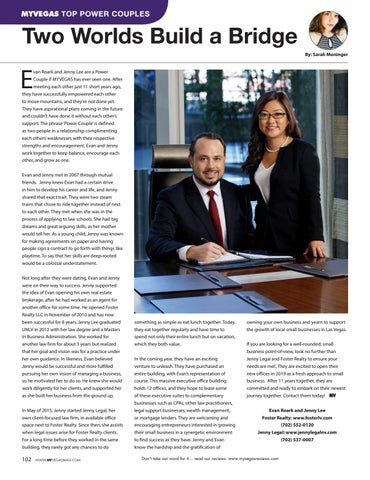 van Roark and Jenny Lee are a Power Couple if MYVEGAS has ever seen one. After meeting each other just 11 short years ago, they have successfully empowered each other to move mountains, and they’re not done yet. They have aspirational plans coming in the future and couldn’t have done it without each other’s support. The phrase ‘Power Couple’ is defined as two people in a relationship complimenting each others’ weaknesses with their respective strengths and encouragement. Evan and Jenny work together to keep balance, encourage each other, and grow as one. Evan and Jenny met in 2007 through mutual friends. Jenny knew Evan had a certain drive in him to develop his career and life, and Jenny shared that exact trait. They were two steam trains that chose to ride together instead of next to each other. They met when she was in the process of applying to law schools. She had big dreams and great arguing skills, as her mother would tell her. As a young child, Jenny was known for making agreements on paper and having people sign a contract to go forth with things like playtime. To say that her skills are deep-rooted would be a colossal understatement. Not long after they were dating, Evan and Jenny were on their way to success. Jenny supported the idea of Evan opening his own real estate brokerage, after he had worked as an agent for another office for some time. He opened Foster Realty LLC in November of 2010 and has now been successful for 8 years. Jenny Lee graduated UNLV in 2012 with her law degree and a Masters in Business Administration. She worked for another law firm for about 3 years but realized that her goal and vision was for a practice under her own guidance. In likeness, Evan believed Jenny would be successful and more fulfilled pursuing her own vision of managing a business, so he motivated her to do so. He knew she would work diligently for her clients, and supported her as she built her business from the ground up. In May of 2015, Jenny started Jenny Legal, her own client-focused law firm, in available office space next to Foster Realty. Since then, she assists when legal issues arise for Foster Realty clients. For a long time before they worked in the same building, they rarely got any chances to do

something as simple as eat lunch together. Today, they eat together regularly and have time to spend not only their entire lunch but on vacation, which they both value. In the coming year, they have an exciting venture to unleash. They have purchased an entire building, with Evan’s representation of course. This massive executive office building holds 12 offices, and they hope to lease some of these executive suites to complementary businesses such as CPAs, other law practitioners, legal support businesses, wealth management, or mortgage lenders. They are welcoming and encouraging entrepreneurs interested in growing their small business in a synergetic environment to find success as they have. Jenny and Evan know the hardship and the gratification of

owning your own business and yearn to support the growth of local small businesses in Las Vegas. If you are looking for a well-rounded, small business point-of-view, look no further than Jenny Legal and Foster Realty to ensure your needs are met. They are excited to open their new offices in 2019 as a fresh approach to small business. After 11 years together, they are committed and ready to embark on their newest journey together. Contact them today! MV Evan Roark and Jenny Lee Foster Realty: www.fosterlv.com (702) 552-0120 Jenny Legal: www.jennylegalnv.com (702) 537-0007

Don’t take our word for it… read our reviews: www.myvegasreviews.com