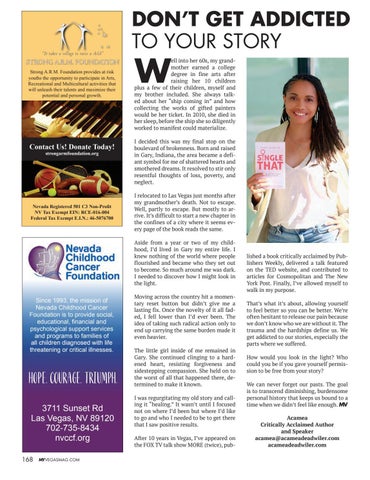 DON’T GET ADDICTED TO YOUR STORY Strong A.R.M. Foundation provides at risk youths the opportunity to participate in Arts, Recreational and Multicultural activities that will unleash their talents and maximize their potential and personal growth.

ell into her 60s, my grandmother earned a college degree in fine arts after raising her 10 children plus a few of their children, myself and my brother included. She always talked about her “ship coming in” and how collecting the works of gifted painters would be her ticket. In 2010, she died in her sleep, before the ship she so diligently worked to manifest could materialize. I decided this was my final stop on the boulevard of brokenness. Born and raised in Gary, Indiana, the area became a defiant symbol for me of shattered hearts and smothered dreams. It resolved to stir only resentful thoughts of loss, poverty, and neglect. I relocated to Las Vegas just months after my grandmother’s death. Not to escape. Well, partly to escape. But mostly to arrive. It’s difficult to start a new chapter in the confines of a city where it seems every page of the book reads the same. Aside from a year or two of my childhood, I’d lived in Gary my entire life. I knew nothing of the world where people flourished and became who they set out to become. So much around me was dark. I needed to discover how I might look in the light.

Since 1993, the mission of Nevada Childhood Cancer Foundation is to provide social, educational, financial and psychological support services and programs to families of all children diagnosed with life threatening or critical illnesses.

Moving across the country hit a momentary reset button but didn’t give me a lasting fix. Once the novelty of it all faded, I fell lower than I’d ever been. The idea of taking such radical action only to end up carrying the same burden made it even heavier. The little girl inside of me remained in Gary. She continued clinging to a hardened heart, resisting forgiveness and sidestepping compassion. She held on to the worst of all that happened there, determined to make it known. I was regurgitating my old story and calling it “healing.” It wasn’t until I focused not on where I’d been but where I’d like to go and who I needed to be to get there that I saw positive results. After 10 years in Vegas, I’ve appeared on the FOX TV talk show MORE (twice), pub-

lished a book critically acclaimed by Publishers Weekly, delivered a talk featured on the TED website, and contributed to articles for Cosmopolitan and The New York Post. Finally, I’ve allowed myself to walk in my purpose. That’s what it’s about, allowing yourself to feel better so you can be better. We’re often hesitant to release our pain because we don’t know who we are without it. The trauma and the hardships define us. We get addicted to our stories, especially the parts where we suffered. How would you look in the light? Who could you be if you gave yourself permission to be free from your story? We can never forget our pasts. The goal is to transcend diminishing, burdensome personal history that keeps us bound to a time when we didn’t feel like enough. MV Acamea Critically Acclaimed Author and Speaker acamea@acameadeadwiler.com acameadeadwiler.com 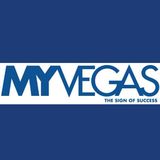