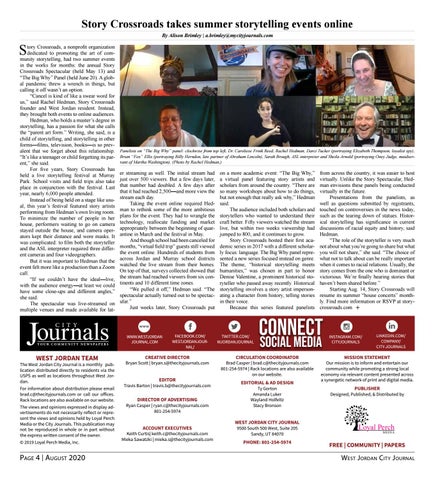 tory Crossroads, a nonprofit organization dedicated to promoting the art of community storytelling, had two summer events in the works for months: the annual Story Crossroads Spectacular (held May 13) and “The Big Why” Panel (held June 20). A global pandemic threw a wrench in things, but calling it off wasn’t an option. “Cancel is kind of like a swear word for us,” said Rachel Hedman, Story Crossroads founder and West Jordan resident. Instead, they brought both events to online audiences. Hedman, who holds a master’s degree in storytelling, has a passion for what she calls the “parent art form.” Writing, she said, is a child of storytelling, and storytelling in other forms—films, television, books—is so prevalent that we forget about this relationship. “It’s like a teenager or child forgetting its parent,” she said. For five years, Story Crossroads has held a live storytelling festival at Murray Park. School visits and field trips also take place in conjunction with the festival. Last year, nearly 6,000 people attended. Instead of being held on a stage like usual, this year’s festival featured story artists performing from Hedman’s own living room. To minimize the number of people in her house, performers waiting to go on camera stayed outside the house, and camera operators kept their distance and wore masks. It was complicated: to film both the storyteller and the ASL interpreter required three different cameras and four videographers. But it was important to Hedman that the event felt more like a production than a Zoom call. “If we couldn’t have the ideal—live, with the audience energy—at least we could have some close-ups and different angles,” she said. The spectacular was live-streamed on multiple venues and made available for lat-

er streaming as well. The initial stream had just over 500 viewers. But a few days later, that number had doubled. A few days after that it had reached 2,500—and more view the stream each day. Taking the event online required Hedman to rethink some of the more ambitious plans for the event. They had to wrangle the technology, reallocate funding and market appropriately between the beginning of quarantine in March and the festival in May. And though school had been canceled for months, “virtual field trip” guests still viewed the event online. Hundreds of students from across Jordan and Murray school districts watched the live stream from their homes. On top of that, surveys collected showed that the stream had reached viewers from six continents and 10 different time zones. “We pulled it off,” Hedman said. “The spectacular actually turned out to be spectacular.” Just weeks later, Story Crossroads put

on a more academic event: “The Big Why,” a virtual panel featuring story artists and scholars from around the country. “There are so many workshops about how to do things, but not enough that really ask why,” Hedman said. The audience included both scholars and storytellers who wanted to understand their craft better. Fifty viewers watched the stream live, but within two weeks viewership had jumped to 800, and it continues to grow. Story Crossroads hosted their first academic series in 2017 with a different scholarly focus: language. The Big Why panel represented a new series focused instead on genre. The theme, “historical storytelling meets humanities,” was chosen in part to honor Denise Valentine, a prominent historical storyteller who passed away recently. Historical storytelling involves a story artist impersonating a character from history, telling stories in their voice. Because this series featured panelists

The West Jordan City Journal is a monthly publication distributed directly to residents via the USPS as well as locations throughout West Jordan. For information about distribution please email brad.c@thecityjournals.com or call our offices. Rack locations are also available on our website. The views and opinions expressed in display advertisements do not necessarily reflect or represent the views and opinions held by Loyal Perch Media or the City Journals. This publication may not be reproduced in whole or in part without the express written consent of the owner. © 2019 Loyal Perch Media, Inc.

from across the country, it was easier to host virtually. Unlike the Story Spectacular, Hedman envisions these panels being conducted virtually in the future. Presentations from the panelists, as well as questions submitted by registrants, touched on controversies in the news today, such as the tearing down of statues. Historical storytelling has significance in current discussions of racial equity and history, said Hedman. “The role of the storyteller is very much not about what you’re going to share but what you will not share,” she said. “The choice of what not to talk about can be really important when it comes to racial relations. Usually, the story comes from the one who is dominant or victorious. We’re finally hearing stories that haven’t been shared before.” Starting Aug. 14, Story Crossroads will resume its summer “house concerts” monthly. Find more information or RSVP at storycrossroads.com l

Our mission is to inform and entertain our community while promoting a strong local economy via relevant content presented across a synergetic network of print and digital media. 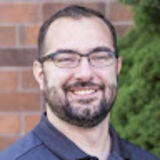