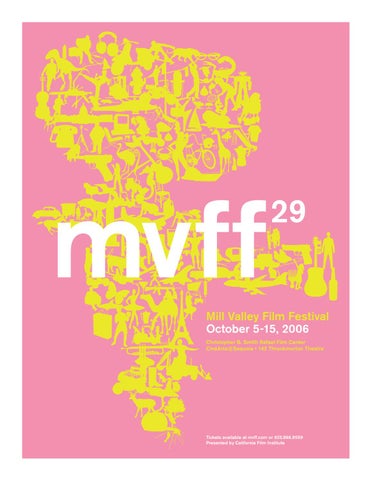 141 How to Become a Sponsor How to Volunteer

A NOTE FROM THE EXECUTIVE DIRECTOR Welcome to the 29th Mill Valley Film Festival!

MAYOR’S PROCLAMATION City of Mill Valley, Office of the Mayor

Despite digital ﬁlmmaking’s democratization of the medium, a good ﬁlm is still a very difﬁcult thing to make. A successful ﬁlm that engages the audience relies more often than not on good, old-fashioned storytelling. This year’s Mill Valley Film Festival is blessed with compelling ﬁlms that are eloquent and passionate, with stories that transport us to other worlds—real, possible and fantastic. This 29th edition of MVFF will show 231 ﬁlms in 11 days: 104 features, of which 38 are premieres, and 127 short ﬁlms. Festival events include our everpopular Children’s FilmFest; the New Movies Lab with its opportunities for aspiring ﬁlmmakers to dialogue with veteran artists; our stellar and star-studded opening and closing galas; the MVFF tributes, awarded to those who exemplify excellence in their art; and a ﬁne complement of musical performances and other activities. This year we are proud to honor Helen Mirren, clearly one of the most highly regarded actors on stage or screen. Included in our tribute program is the screening of her latest award-winning performance in The Queen, from director Stephen Frears. We are also excited to have uncompromising ﬁlmmaker and superbly gifted actor Tim Robbins as a tributee this year. His latest ﬁlm Catch a Fire, directed by Phillip Noyce and with superb performances by Derek Luke and Bonnie Henna, screens at the Festival. The spotlight award this year goes to director Alejandro González Iñárritu. Closely on the heels of his ﬁrst two features, Amores Perros and 21 Grams, Babel, which will be shown as part of the spotlight program, has conﬁrmed initial critical and popular opinion that Iñárritu is a most original and signiﬁcant director. The Festival opens with two powerful ﬁlms: the US premiere of Breaking and Entering, Anthony Minghella’s multilayered relationship drama starring Jude Law, Juliette Binoche and Robin Wright Penn; and Kevin Macdonald’s intense thriller The Last King of Scotland, starring Forest Whitaker in a brilliant portrayal of former Ugandan president Idi Amin. Our closing ﬁlm is the world premiere of The Astronaut Farmer, the Polish brothers’ highly anticipated new feature starring Billy Bob Thornton and Virginia Madsen.

Between opening and closing are literally hundreds of great shorts, documentaries and narrative ﬁlms from 43 countries. My hope is that you will have the chance to see as many of these incredible ﬁlms as possible. As always, I would like to remind our Festival attendees that in producing a festival of this caliber, approximately 50 percent of our income is generated by contributions. I also want to thank everyone who has once again worked tirelessly to make the Festival possible: to our generous donors, our dedicated staff, our board of directors and volunteer staff, our wonderful audiences and, of course, especially the artists whose creations we are so privileged and excited to share.

DONâ&#x20AC;&#x2122;T MISS OUT MANY FILM SCREENINGS SELL OUT get your tickets in advance at mvff.com ONLINE mvff.com

We’re in the business of insuring your most priceless possessions. In this case, an open mind.

Through the creativity and passion of filmmakers around the world, we are all able to see things a little differently. And understand ourselves and each other a little better. That’s why year after year, we proudly sponsor the Mill Valley Film Festival and its many outreach and educational program activities. We’re very lucky to have all of this right here in our community. And we applaud the festival for providing another dynamic line up that is sure to have a profound effect on us all.

FESTIVAL SHOPS Visit our Festival shop for ofﬁcial Festival merchandise, which make great holiday gifts for yourself and other ﬁlm lovers. The Festival shop is located at the San Rafael ticket outlet and the Outdoor Art Club during the Festival.

ETIQUETTE As a courtesy and in fairness to others, we ask that you only hold one seat per person when attending screenings and events. Please turn off pagers, cell phones and watch alarms. Thank you and enjoy the ﬁlms.

PHOTOGRAPHY, VIDEO AND RECORDING Photography, video and audio recording are prohibited in all theatrical and other Festival venues.

PUBLIC TRANSPORTATION Call Golden Gate Transit at 415.923.2000 for information about taking public transportation to and from the Mill Valley Film Festival.

*Each phone, fax, mail or Internet order is charged a nonrefundable processing fee.

MEMBERSHIP INFORMATION Membership information will be available at Festival ticket outlets, the Outdoor Art Club and at the Smith Rafael Film Center. New members may join, and old friends may renew or upgrade their existing memberships.

Ticket outlet hours and information about how to purchase tickets can be found on our Web site and on page 58 of the MVFF newsprint schedule.

CINÉARTS@SEQUOIA AND 142 THROCKMORTON THEATRE From US 101, take the Tiburon/East Blithedale exit and proceed west on Blithedale toward downtown Mill Valley. Turn left onto Throckmorton.