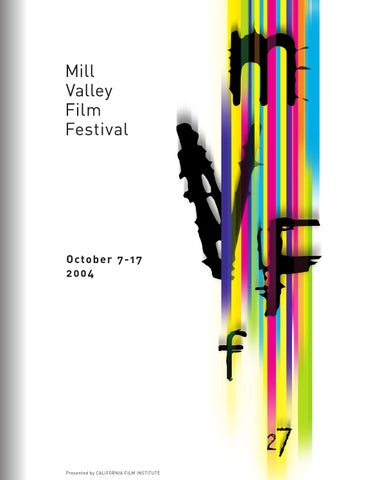 director’s note I can say without a doubt that this year’s Festival program is one of our best yet. Its strength and diversity is reflected in both our prestigious honorees and our incredible slate of films from around the world. It is well documented that Albert Maysles and his late brother, David, transformed the documentary genre. Involved in cinema verité before the term was even invented, Albert Maysles applied his approach to nonfiction filmmaking, developing what he ultimately called direct cinema, using spontaneity, mobility and invisibility to lead the documentary genre in a new direction. In addition to these innovations, the Maysles brothers’ sensitivity and unique talents have made them legends in the field. To say that MVFF and its audiences are fans of director Mike Leigh’s work is an understatement. Nearly all of Leigh’s feature films have screened here. A world-class director whose filmmaking perspective and process are unique, Leigh creates complex, fresh films that are courageous and entertaining. At press time, it was announced that Leigh’s new film, Vera Drake, which will be presented as part of our Tribute program to Leigh, had won the Gold Lion in Venice for best film and best actress for its star, Imelda Staunton, who will also be joining us to salute this fine filmmaker. Perseverance pays off! I can’t remember how many times over the last two decades we have attempted to honor Gena Rowlands at MVFF. Years ago Rob Nilsson (former MVFF Tributee) asked on our behalf, and my colleague Ron Henderson, director of the

Denver Film Festival, also contacted Ms. Rowlands, but each time there was a glitch that prevented it from happening. Why have we been so determined to have Ms. Rowlands as a Tributee? It wasn’t just the two best actress Oscar nominations for Woman Under the Influence and Gloria, or the Emmy for her portrayal of the First Lady in The Betty Ford Story or the Golden Bear she received at the Berlin International Film Festival for her starring role in Opening Night. To put it succinctly, Rowlands epitomizes the great indie actress—a woman way ahead of her time who has been part of a family (both on and off the screen) that has breathed and lived cinema. “My God, who is this woman?” I asked myself after the premiere of You Can Count on Me at MVFF in 2000. I wasn’t alone: Laura Linney’s performance in that film touched a nerve and touched the heart, elevating her to stardom and a well-deserved Oscar nomination. This year we honor Linney in a special Spotlight program, acknowledging her immense talents and her superb roles in two new and extraordinary films, P.S. and Kinsey. Albert Maysles, Mike Leigh, Gena Rowlands and Laura Linney—just four reasons why the 27th Mill Valley Film Festival may be the best ever! But don’t stop there—there are nearly 200 more reasons to take time off from work, prepare yourself for an allpopcorn diet and map out a three-film-a-day schedule for the next 11 days. Our skilled and experienced programming team has put together an incredible line-up of 90 feature films, 100 shorts and 27 premieres from 37 different countries. This year’s Festival features an especially strong showing of work from the Middle East, Eastern Europe and Asia, as

well as several new films from Iran. Documentaries, which have become the unexpected box office draws in mainstream theaters this year, are another strength of this year’s Festival, with a full 25 percent increase in documentary programs being offered over last year. The 27th Mill Valley Film Festival also features a milestone in children’s programming, celebrating the 10th anniversary of our beloved Children’s FilmFest. MVFF officially inaugurated the Children’s FilmFest in 1995 to serve a young audience that craved quality programming. In the last decade, we have filled that need with an annual eclectic mix of international films, shorts, animation, silent films with live music, parties, seminars, ice cream socials and an extensive hands-on workshop program that has taught hundreds of kids how to make fiction, documentary and animated films. This year’s Children’s FilmFest promises to be just as fun, enlightening and entertaining, with more films, workshops and surprises in store for audiences of all ages and sizes. Once again, a huge and sincere thank you to the individuals, foundations, businesses and many others who have contributed so generously to the Mill Valley Film Festival. To our Board, staff and hundreds of tireless volunteers—please know that it cannot happen without you!

“I wish this theater were in my neck of the woods.” Sam Elliott

When the curtain closes on this year’s Film Festival, plan to stick around. Throughout the year, the Christopher B. Smith Rafael Film Center

with three screens and state-of-the-art presentation. Since

keeps the festivities going with regular programs of independent

its grand re-opening, the Rafael has become a vital part of the

lively film and video scene in the San Francisco Bay Area, and

Owned and operated by the California Film Institute, the non-

it’s closer and more convenient than you might think. In fact,

places on the planet to see great films.

In Mill Valley: Two-hour parking meters in downtown Mill Valley operate 9am–6pm. Monday through Friday, and cars parked over two hours are subject to ticketing. Although meters are free after 6PM and on weekends, the two-hour limit is still enforced. See map for directions and parking areas.

In San Rafael: There are parking garages throughout the downtown San Rafael area. Two-hour parking meters in San Rafael operate 9am–6pm, Monday through Saturday, and cars parked for more than two hours are subject to ticketing. Meters are free after 6PM and on Sundays. See map for directions and parking areas.

The Membership Information table will be set up at the Box Office in San Rafael, where new members may join, and old friends may renew or upgrade their existing memberships.

Visit our Festival Shop for Official Festival Merchandise—they make great holiday gifts for yourself and other film lovers. The Festival Shop is located at the San Rafael Box Office during the Festival.

As a courtesy and in fairness to others, we ask that you only hold one seat per person when attending screenings and events. Please turn off pagers, cell phones and watch alarms. Thank you and enjoy the films.

Access our Web site 24 hours a day at www.mvff.com.*

Box Office hours, and information about how to purchase tickets can be found on our website and on page 42 of the MVFF newsprint schedule. * Each phone, fax, mail or Internet order is charged a nonrefundable processing fee.

B ST RE ET

From US 101, take the Tiburon/East Blithedale exit and proceed west on Blithedale toward downtown Mill Valley. Take a left onto Throckmorton.

American Airlines is proud to support the art of filmmaking in communities around the world. We are, of course, equally proud to offer you world class service to more than 250 cities in 40 countries around the globe. To make reservations with the worldâ&#x20AC;&#x2122;s largest airline, visit AA.com or call your Travel Agent.

We often mingle with the stars.