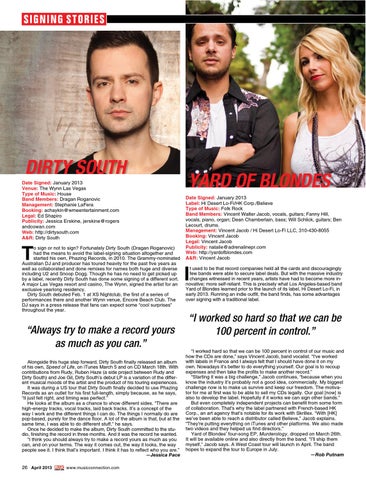 o sign or not to sign? Fortunately Dirty South (Dragan Roganovic) had the means to avoid the label-signing situation altogether and started his own, Phazing Records, in 2010. The Grammy-nominated Australian DJ and producer has toured heavily for the past five years as well as collaborated and done remixes for names both huge and diverse including U2 and Snoop Dogg. Though he has no need to get picked up by a label, recently Dirty South has done some signing of a different sort. A major Las Vegas resort and casino, The Wynn, signed the artist for an exclusive yearlong residency. Dirty South debuted Feb. 1 at XS Nightclub, the first of a series of performances there and another Wynn venue, Encore Beach Club. The DJ says in a press release that fans can expect some “cool surprises” throughout the year.

“Always try to make a record yours as much as you can.” Alongside this huge step forward, Dirty South finally released an album of his own, Speed of Life, on iTunes March 5 and on CD March 18th. With contributions from Rudy, Ruben Haze (a side project between Rudy and Dirty South) and Joe Gil, Dirty South’s debut LP is a variation of the different musical moods of the artist and the product of his touring experiences. It was during a US tour that Dirty South finally decided to use Phazing Records as an outlet for his first full-length, simply because, as he says, “it just felt right, and timing was perfect.” He looks at the album as a chance to show different sides. “There are high-energy tracks, vocal tracks, laid back tracks. It’s a concept of the way I work and the different things I can do. The things I normally do are pop-based, purely for the dance floor. A lot of the album is that, but at the same time, I was able to do different stuff,” he says. Once he decided to make the album, Dirty South committed to the studio, finishing the record in three months. And it was the record he wanted. “I think you should always try to make a record yours as much as you can, and on your terms. The way it comes out, the way it looks, the way people see it. I think that’s important. I think it has to reflect who you are.” —Jessica Pace 26 April 2013

t used to be that record companies held all the cards and discouragingly few bands were able to secure label deals. But with the massive industry changes witnessed in recent years, artists have had to become more innovative; more self-reliant. This is precisely what Los Angeles-based band Yard of Blondes learned prior to the launch of its label, Hi Desert Lo-Fi, in early 2013. Running an indie outfit, the band finds, has some advantages over signing with a traditional label.

“I worked so hard so that we can be 100 percent in control.” “I worked hard so that we can be 100 percent in control of our music and how the CDs are done,” says Vincent Jacob, band vocalist. “I&#39;ve worked with labels in France and I always felt that I should have done it on my own. Nowadays it’s better to do everything yourself. Our goal is to recoup expenses and then take the profits to make another record.” “Starting it was a big challenge,” Jacob continues, “because when you know the industry it’s probably not a good idea, commercially. My biggest challenge now is to make us survive and keep our freedom. The motivator for me at first was to be able to sell my CDs legally. Our goal [now] is also to develop the label. Hopefully if it works we can sign other bands.” But even completely independent projects can benefit from some form of collaboration. That&#39;s why the label partnered with French-based HK Corp., an art agency that&#39;s notable for its work with Skrillex. “With [HK] we’ve been able to reach a distributor called Believe,” Jacob explains. “They&#39;re putting everything on iTunes and other platforms. We also made two videos and they helped us find directors.” Yard of Blondes’ four-song EP, Murderology, dropped on March 26th. It will be available online and also directly from the band. “I’ll ship them myself,” Jacob says. A West Coast tour will launch in April. The band hopes to expand the tour to Europe in July. —Rob Putnam

Paramore graces the cover of Music Connection's Guitar/Bass issue. Also featured is a guitar/bass roundtable, tips on how to sell your songwriting royalties, a Q&A with Talib Kweli and MC's annual Guitar/Bass Services & Instructors guide.