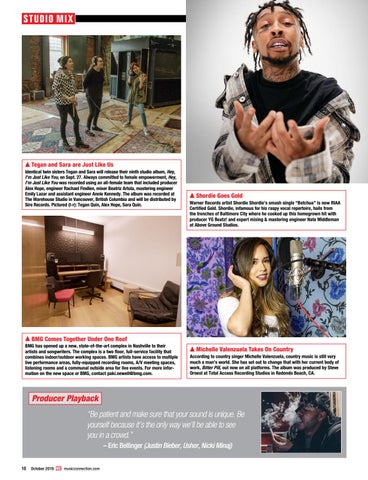 BMG Comes Together Under One Roof BMG has opened up a new, state-of-the-art complex in Nashville to their artists and songwriters. The complex is a two floor, full-service facility that combines indoor/outdoor working spaces. BMG artists have access to multiple live performance areas, fully-equipped recording rooms, A/V meeting spaces, listening rooms and a communal outside area for live events. For more information on the new space or BMG, contact paki.newell@bmg.com.

Michelle Valenzuela Takes On Country According to country singer Michelle Valenzuela, country music is still very much a man’s world. She has set out to change that with her current body of work, Bitter Pill, out now on all platforms. The album was produced by Steve Ornest at Total Access Recording Studios in Redondo Beach, CA.

Producer Playback “Be patient and make sure that your sound is unique. Be yourself because it’s the only way we’ll be able to see you in a crowd.” – Eric Bellinger (Justin Bieber, Usher, Nicki Minaj) 18 18

Music Connection presents its October issue featuring an exclusive interview with artist-producer-songwriter Jack Antonoff! Elsewhere in the issue, we feature 4 Masters of Mastering and two free directories: US Mastering Studios and US College/Indie Radios.

Jack Antonoff: Songwriter-Producer-Artist on the Tightrope

In this exclusive interview, the Grammy-winning artist-producer-songwriter (Lana Del Rey, St. Vincent, Taylor Swift, fun., and his latest band, Red Hearse) talks candidly about everything––from his lean, pre-fame years to his current successes and how he applies his creative process to each project.