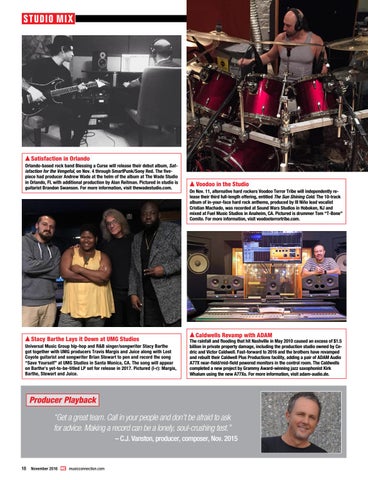 Satisfaction in Orlando Orlando-based rock band Blessing a Curse will release their debut album, Satisfaction for the Vengeful, on Nov. 4 through SmartPunk/Sony Red. The fivepiece had producer Andrew Wade at the helm of the album at The Wade Studio in Orlando, FL with additional production by Alan Reitman. Pictured in studio is guitarist Brandon Swanson. For more information, visit thewadestudio.com.

Stacy Barthe Lays it Down at UMG Studios Universal Music Group hip-hop and R&B singer/songwriter Stacy Barthe got together with UMG producers Travis Margis and Juice along with Lost Coyote guitarist and songwriter Brian Stewart to pen and record the song “Save Yourself” at UMG Studios in Santa Monica, CA. The song will appear on Barthe’s yet-to-be-titled LP set for release in 2017. Pictured (l-r): Margis, Barthe, Stewart and Juice.

The rainfall and flooding that hit Nashville in May 2010 caused an excess of $1.5 billion in private property damage, including the production studio owned by Cedric and Victor Caldwell. Fast-forward to 2016 and the brothers have revamped and rebuilt their Caldwell Plus Productions facility, adding a pair of ADAM Audio A77X near-field/mid-field powered monitors in the control room. The Caldwells completed a new project by Grammy Award-winning jazz saxophonist Kirk Whalum using the new A77Xs. For more information, visit adam-audio.de.

Producer Playback “Get a great team. Call in your people and don’t be afraid to ask for advice. Making a record can be a lonely, soul-crushing test.” – C.J. Vanston, producer, composer, Nov. 2015