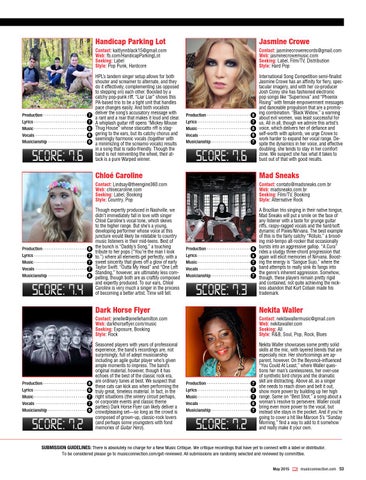 HPL’s tandem singer setup allows for both shouter and screamer to alternate, and they do it effectively, complementing (as opposed to stepping on) each other. Boosted by a catchy pop-punk riff, “Liar Liar” shows this PA-based trio to be a tight unit that handles pace changes easily. And both vocalists deliver the song’s accusatory message with a rant and a roar that makes it loud and clear. A whiplash guitar riff opens “Mickey Mouse Thug House” whose staccatto riff is staggering to the ears, but its catchy chorus and seemingly harmonic vocals (together with a minimizing of the screamo vocals) results in a song that is radio-friendly. Though the band is not reinventing the wheel, their attack is a pure Warped winner.

International Song Competition semi-finalist Jasmine Crowe has an affinity for fiery, spectacular imagery, and with her co-producer Josh Corey she has fashioned electronic pop songs like “Supernova” and “Phoenix Rising” with female empowerment messages and danceable propulsion that are a promising combination. “Black Widow,” a warning about evil women, was least successful for us. All in all, though we admire this artist’s voice, which delivers her of defiance and self-worth with aplomb, we urge Crowe to work harder to expand her vocal range. Despite the dynamics in her voice, and effective doubling, she tends to stay in her comfort zone. We suspect she has what it takes to bust out of that with good results.

Though expertly produced in Nashville, we didn’t immediately fall in love with singer Chloé Caroline’s vocal tone, which skews to the higher range. But she’s a young, developing performer whose voice at this juncture would likely be relatable to country music listeners in their mid-teens. Best of the bunch is “Daddy’s Song,” a touching tribute to her pops (“You’re the man I look to.”) where all elements gel perfectly, with a sweet sincerity that gives off a glow of early Taylor Swift. “Outta My Head” and “One Left Standing,” however, are ultimately less compelling, though both are as craftily composed and expertly produced. To our ears, Chloé Caroline is very much a singer in the process of becoming a better artist. Time will tell.

A Brazilian trio singing in their native tongue, Mad Sneaks will put a smile on the face of any listener with a taste for grunge guitar riffs, raspy-ragged vocals and the hard/soft dynamic of Pixies/Nirvana. The best example of this is the fairly catchy “Rótulo,” a brooding mid-tempo alt-rocker that occasionally bursts into an aggressive gallop. “A Cura” rides a sludgy three-chord progression that again will elicit memories of Nirvana. Boosting the energy is “Sangue Sujo,” where the band attempts to really sink its fangs into the genre’s inherent aggression. Somehow, though, these players remain pretty rigid and contained, not quite achieving the reckless abandon that Kurt Cobain made his trademark.

Seasoned players with years of professional experience, the band’s recordings are, not surprisingly, full of adept musicianship including an agile guitar player who’s given ample moments to impress. The band’s original material, however, though it has echoes of the best of the classic rock era, are ordinary tunes at best. We suspect that these cats can kick ass when performing the truly great, timeless material. In fact, in the right situations (the winery circuit perhaps, or corporate events and classic theme parties) Dark Horse Flyer can likely deliver a crowdpleasing set––so long as the crowd is composed of grown-up, classic-rock lovers (and perhaps some youngsters with fond memories of Guitar Hero).

Nekita Waller showcases some pretty solid skills at the mic, with layered blends that are especially nice. Her shortcomings are apparent, however. On the Beyoncé-influenced “You Could At Least,” where Waller questions her man’s carelessness, her over-use of synthetic bird chirps and the dramatic skit are distracting. Above all, as a singer she needs to reach down and belt it out, show more power by building up her high range. Same on “Best Shot,” a song about a woman’s resolve to persevere. Waller could bring even more power to the vocal, but instead she stays in the pocket. And if you’re going to cover a hit like Maroon 5’s “Sunday Morning,” find a way to add to it somehow and really make it your own.

SUBMISSION GUIDELINES: There is absolutely no charge for a New Music Critique. We critique recordings that have yet to connect with a label or distributor. To be considered please go to musicconnection.com/get-reviewed. All submissions are randomly selected and reviewed by committee. May 2015

Music Connection presents its 2015 singers and vocals issue featuring Swedish pop-sensation Tove Lo. Elsewhere in the issue we shed light on singers on singing, How to Get Gear Endorsements and two free directories for Music Schools and Vocal Coaches!