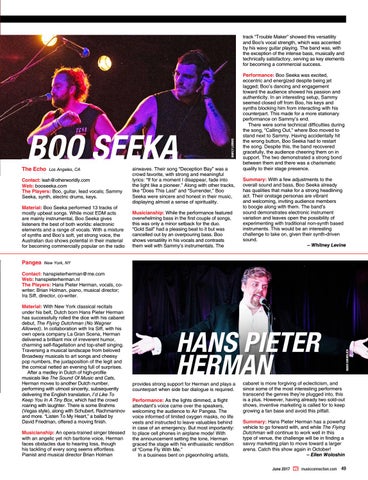 track “Trouble Maker” showed this versatility and Boo&#39;s vocal strength, which was accented by his wavy guitar playing. The band was, with the exception of the intense bass, musically and technically satisfactory, serving as key elements for becoming a commercial success.

airwaves. Their song “Deception Bay” was a crowd favorite, with strong and meaningful lyrics: “If for a moment I disappear, fade into the light like a pioneer.” Along with other tracks, like “Does This Last” and “Surrender,” Boo Seeka were sincere and honest in their music, displaying almost a sense of spirituality. Musicianship: While the performance featured overwhelming bass in the first couple of songs, this was only a minor setback for the duo. “Gold Sail” had a pleasing beat to it but was cancelled out by an overpouring bass. Boo shows versatility in his vocals and contrasts them well with Sammy’s instrumentals. The

Performance: Boo Seeka was excited, eccentric and energized despite being jet lagged; Boo’s dancing and engagement toward the audience showed his passion and authenticity. In an interesting setup, Sammy seemed closed off from Boo, his keys and synths blocking him from interacting with his counterpart. This made for a more stationary performance on Sammy’s end. There were some technical difficulties during the song, “Calling Out,” where Boo moved to stand next to Sammy. Having accidentally hit the wrong button, Boo Seeka had to restart the song. Despite this, the band recovered gracefully, the audience cheering them on in support. The two demonstrated a strong bond between them and there was a charismatic quality to their stage presence. Summary: With a few adjustments to the overall sound and bass, Boo Seeka already has qualities that make for a strong headlining act. Their onstage personas are vibrant and welcoming, inviting audience members to boogie along with them. The band’s sound demonstrates electronic instrument variation and leaves open the possibility of experimenting with traditional non-synth based instruments. This would be an interesting challenge to take on, given their synth-driven sound. – Whitney Levine

Musicianship: An opera-trained singer blessed with an angelic yet rich baritone voice, Herman faces obstacles due to hearing loss, though his tackling of every song seems effortless. Pianist and musical director Brian Holman

HANS PIETER HERMAN provides strong support for Herman and plays a counterpart when side bar dialogue is required. Performance: As the lights dimmed, a flight attendant’s voice came over the speakers, welcoming the audience to Air Pangea. The voice informed of limited oxygen masks, no life vests and instructed to leave valuables behind in case of an emergency. But most importantly: to place cell phones in airplane mode! With the announcement setting the tone, Herman graced the stage with his enthusiastic rendition of “Come Fly With Me.” In a business bent on pigeonholing artists,

Material: With New York classical recitals under his belt, Dutch born Hans Pieter Herman has successfully rolled the dice with his cabaret debut, The Flying Dutchman (No Wagner Allowed). In collaboration with Ira Siff, with his own opera company La Gran Scena, Herman delivered a brilliant mix of irreverent humor, charming self-flagellation and top-shelf singing. Traversing a musical landscape from beloved Broadway musicals to art songs and cheesy pop numbers, the juxtaposition of the legit and the comical netted an evening full of surprises. After a medley in Dutch of high-profile musicals like The Sound Of Music and Cats, Herman moves to another Dutch number, performing with utmost sincerity, subsequently delivering the English translation, I’d Like To Keep You In A Tiny Box, which had the crowd roaring with laughter. There is some Brahms (Vegas style), along with Schubert, Rachmaninov and more. “Listen To My Heart,” a ballad by David Friedman, offered a moving finish.

cabaret is more forgiving of eclecticism, and since some of the most interesting performers transcend the genres they’re plugged into, this is a plus. However, having already two sold-out shows, inventive marketing is called for to keep growing a fan base and avoid this pitfall. Summary: Hans Pieter Herman has a powerful vehicle to go forward with, and while The Flying Dutchman will continue to work well in this type of venue, the challenge will be in finding a savvy marketing plan to move toward a larger arena. Catch this show again in October! – Ellen Woloshin June 2017 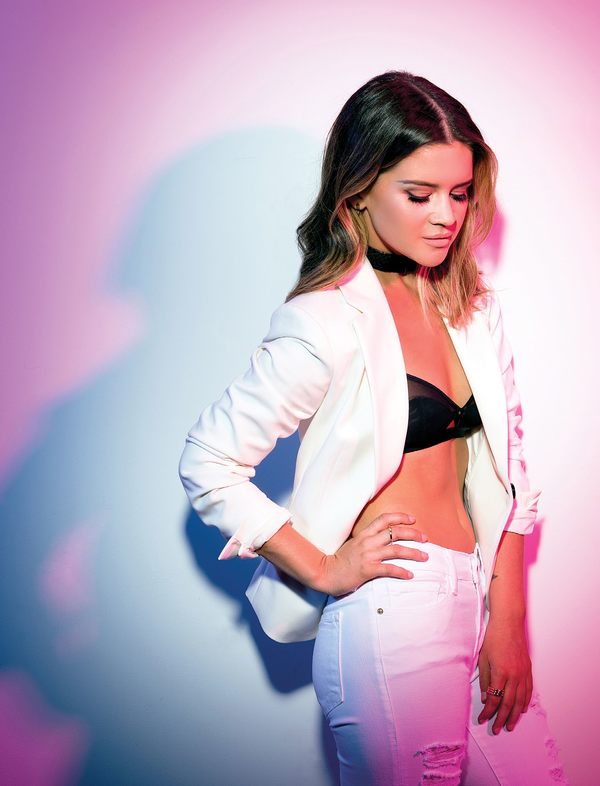 In between recent gigs in Texas, the 26-year-old wunderkind spoke for a spell with Music Connection about where she's been, where she's at and where she's going as an artist.