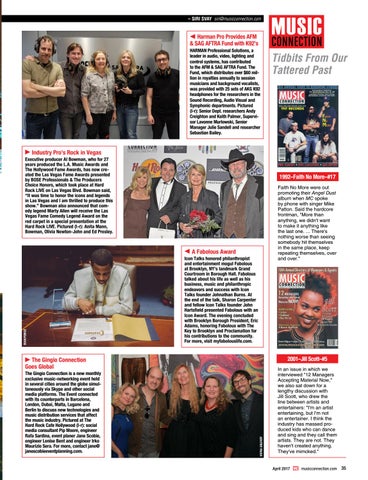 Industry Pro’s Rock in Vegas Executive producer Al Bowman, who for 27 years produced the L.A. Music Awards and The Hollywood Fame Awards, has now created the Las Vegas Fame Awards presented by BOSE Professionals & The Producers Choice Honors, which took place at Hard Rock LIVE on Las Vegas Blvd. Bowman said, “It was time to honor the icons and legends in Las Vegas and I am thrilled to produce this show.” Bowman also announced that comedy legend Marty Allen will receive the Las Vegas Fame Comedy Legend Award on the red carpet in a special presentation at the Hard Rock LIVE. Pictured (l-r): Anita Mann, Bowman, Olivia Newton-John and Ed Presley.

1992–Faith No More–#17 Faith No More were out promoting their Angel Dust album when MC spoke by phone with singer Mike Patton. Said the hardcore frontman, "More than anything, we didn't want to make it anything like the last one. ... There's nothing worse than seeing somebody hit themselves in the same place, keep repeating themselves, over and over."

A Fabolous Award Icon Talks honored philanthropist and entertainment mogul Fabolous at Brooklyn, NY’s landmark Grand Courtroom in Borough Hall. Fabolous talked about his life as well as his business, music and philanthropic endeavors and success with Icon Talks founder Johnathan Burns. At the end of the talk, Sharon Carpenter and fellow Icon Talks founder John Hartsfield presented Fabolous with an Icon Award. The evening concluded with Brooklyn Borough President, Eric Adams, honoring Fabolous with The Key to Brooklyn and Proclamation for his contributions to the community. For more, visit myfabolouslife.com.

In an issue in which we interviewed "12 Managers Accepting Material Now," we also sat down for a lengthy discussion with Jill Scott, who drew the line between artists and entertainers: "I'm an artist entertaining, but I'm not an entertainer. I think the industry has massed produced kids who can dance and sing and they call them artists. They are not. They haven't created anything. They've mimcked." April 2017

Music Connection presents its 2017 Singers issue featuring sister trio Joseph. Elsewhere in the issue we shed light on How to Cope with Diff...

Music Connection presents its 2017 Singers issue featuring sister trio Joseph. Elsewhere in the issue we shed light on How to Cope with Diff...