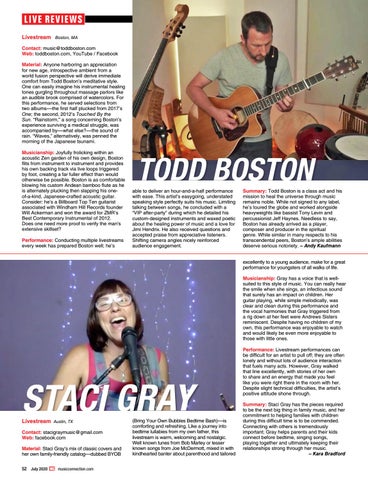 Contact: music@toddboston.com Web: toddboston.com, YouTube / Facebook Material: Anyone harboring an appreciation for new age, introspective ambient from a world fusion perspective will derive immediate comfort from Todd Boston’s meditative style. One can easily imagine his instrumental healing tones gurgling throughout massage parlors like an audible brook comprised of watercolors. For this performance, he served selections from two albums––the first half plucked from 2017’s One; the second, 2012’s Touched By the Sun. “Rainstorm,” a song concerning Boston’s experience surviving a medical struggle, was accompanied by––what else?––the sound of rain. “Waves,” alternatively, was penned the morning of the Japanese tsunami. Musicianship: Joyfully frolicking within an acoustic Zen garden of his own design, Boston flits from instrument to instrument and provides his own backing track via live loops triggered by foot, creating a far fuller effect than would otherwise be possible. Boston is as comfortable blowing his custom Andean bamboo flute as he is alternately plucking then slapping his oneof-a-kind, Japanese-crafted acoustic guitar. Consider: he’s a Billboard Top Ten guitarist associated with Windham Hill Records founder Will Ackerman and won the award for ZMR’s Best Contemporary Instrumental of 2012. Does one need more proof to verify the man&#39;s extensive skillset? Performance: Conducting multiple livestreams every week has prepared Boston well; he’s

TODD BOSTON able to deliver an hour-and-a-half performance with ease. This artist’s easygoing, understated speaking style perfectly suits his music. Limiting talking between songs, he concluded with a “VIP after-party” during which he detailed his custom-designed instruments and waxed poetic about the healing power of music and a love for Jimi Hendrix. He also received questions and accepted praise from appreciative listeners. Shifting camera angles nicely reinforced audience engagement.

Summary: Todd Boston is a class act and his mission to heal the universe through music remains noble. While not signed to any label, he’s toured the globe and worked alongside heavyweights like bassist Tony Levin and percussionist Jeff Haynes. Needless to say, Boston has already arrived as a player, composer and producer in the spiritual genre. While similar in many respects to his transcendental peers, Boston’s ample abilities deserve serious notoriety. – Andy Kaufmann excellently to a young audience, make for a great performance for youngsters of all walks of life. Musicianship: Gray has a voice that is wellsuited to this style of music. You can really hear the smile when she sings, an infectious sound that surely has an impact on children. Her guitar playing, while simple melodically, was clear and clean during this performance and the vocal harmonies that Gray triggered from a rig down at her feet were Andrews Sisters reminiscent. Despite having no children of my own, this performance was enjoyable to watch and would likely be even more enjoyable to those with little ones.

(Bring Your Own Bubbles Bedtime Bash)––is comforting and refreshing. Like a journey into bedtime lullabies from my own father, this livestream is warm, welcoming and nostalgic. Well known tunes from Bob Marley or lesser known songs from Joe McDermott, mixed in with kindhearted banter about parenthood and tailored

Performance: Livestream performances can be difficult for an artist to pull off; they are often lonely and without lots of audience interaction that fuels many acts. However, Gray walked that line excellently, with stories of her own to share and an energy that made you feel like you were right there in the room with her. Despite slight technical difficulties, the artist’s positive attitude shone through. Summary: Staci Gray has the pieces required to be the next big thing in family music, and her commitment to helping families with children during this difficult time is to be commended. Connecting with others is tremendously important; Gray helps parents and their kids connect before bedtime, singing songs, playing together and ultimately keeping their relationships strong through her music. – Kara Bradford

Q&A with The Black Keys, "Finding Their Tone at Home" Q&A with Producers Across the Country, and More!