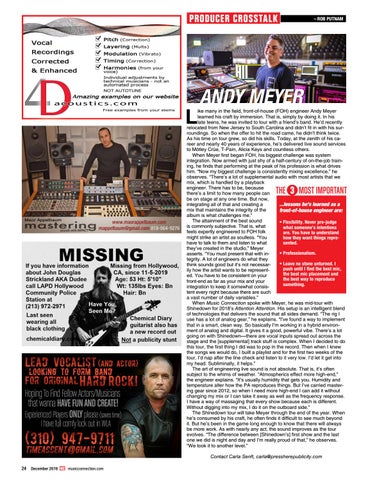 Free examples from your stems

ike many in the field, front-of-house (FOH) engineer Andy Meyer learned his craft by immersion. That is, simply by doing it. In his late teens, he was invited to tour with a friend’s band. He’d recently relocated from New Jersey to South Carolina and didn’t fit in with his surroundings. So when the offer to hit the road came, he didn’t think twice. As his time on tour grew, so did his skills. Today, at the zenith of his career and nearly 40 years of experience, he’s delivered live sound services to Mötley Crüe, T-Pain, Alicia Keys and countless others. When Meyer first began FOH, his biggest challenge was system integration. Now armed with just shy of a half-century of on-the-job training, he finds that performing at the peak of his profession is what drives him. “Now my biggest challenge is consistently mixing excellence,” he observes. “There’s a lot of supplemental audio with most artists that we mix, which is handled by a playback engineer. There has to be, because there’s a limit to how many people can be on stage at any one time. But now, integrating all of that and creating a ...lessons he’s learned as a mix that maintains the integrity of the front-of-house engineer are: album is what challenges me.” The attainment of the best sound • Flexibility. Never pre-judge is commonly subjective. That is, what what someone’s intentions feels expertly engineered to FOH folk are. You have to understand might strike an artist as soulless. “You how they want things reprehave to talk to them and listen to what sented. they’ve created in the studio,” Meyer • Professionalism. asserts. “You must present that with integrity. A lot of engineers do what they • Leave no stone unturned. I think sounds good but it’s not necessarpush until I find the best mic, ily how the artist wants to be representthe best mic placement and ed. You have to be consistent on your the best way to reproduce front-end as far as your mix and your something. integration to keep it somewhat consistent every night because there are such a vast number of daily variables.” When Music Connection spoke with Meyer, he was mid-tour with Shinedown for 2018’s Attention Attention. His setup is an intelligent blend of technologies that delivers the sound that all sides demand. “The rig I use has a lot of analog gear,” he explains. “I’ve found a way to implement that in a smart, clean way. So basically I’m working in a hybrid environment of analog and digital. It gives it a good, powerful vibe. There’s a lot going on with Shinedown—there are vocal inputs spread out across the stage and the [supplemental] track stuff is complex. When I decided to do this tour, the first thing I did was to pop in the record. Then when I knew the songs we would do, I built a playlist and for the first two weeks of the tour, I’d nap after the line check and listen to it very low. I’d let it get into my head. Subliminally, it helps.” The art of engineering live sound is not absolute. That is, it’s often subject to the whims of weather. “Atmospherics effect more high-end,” the engineer explains. “It’s usually humidity that gets you. Humidity and temperature alter how the PA reproduces things. But I’ve carried mastering gear since 2012, so when I need more high-end I can add it without changing my mix or I can take it away as well as the frequency response. I have a way of massaging that every show because each is different. Without digging into my mix, I do it on the outboard side.” The Shinedown tour will take Meyer through the end of the year. When he’s consumed by his craft, he often finds it difficult to see much beyond it. But he’s been in the game long enough to know that there will always be more work. As with nearly any act, the sound improves as the tour evolves. “The difference between [Shinedown’s] first show and the last one we did is night and day and I’m really proud of that,” he observes. “We took it to another level.” Contact Carla Senft, carla@pressherepublicity.com

Music Connection presents its December issue featuring an exclusive interview with EDM sensation Rezz! Elsewhere in the issue, we feature 100 Best Career Tips of the Year and our Hot 100 LIVE Unsigned Bands & Artists. 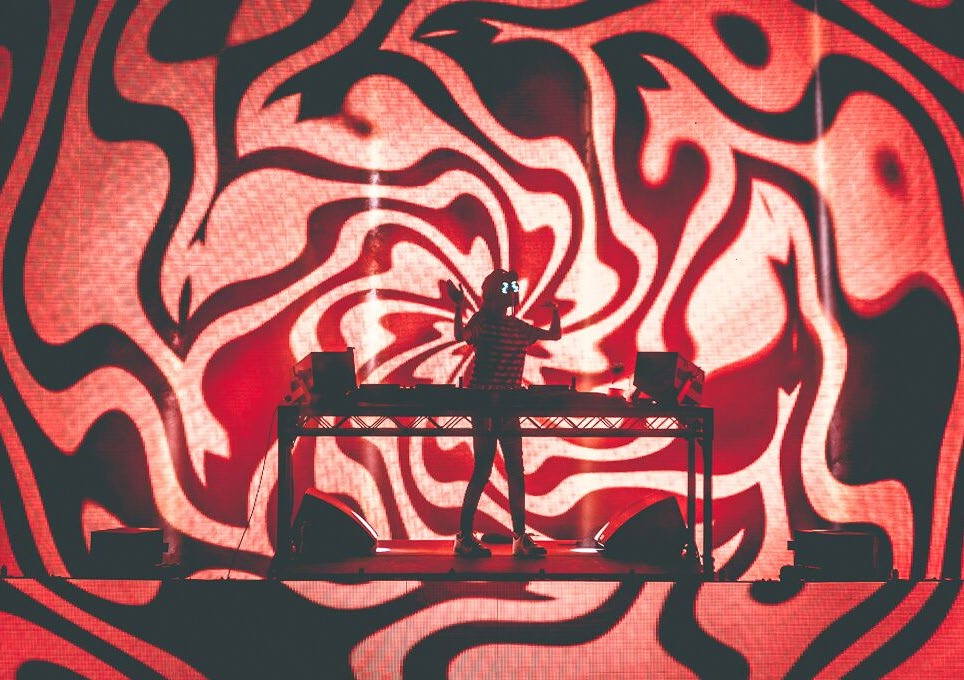 In our exclusive interview with this EDM sensation, she traces her career path, discusses her recording techniques, reveals her battles with anxiety and how she put together a dazzling headlining tour.