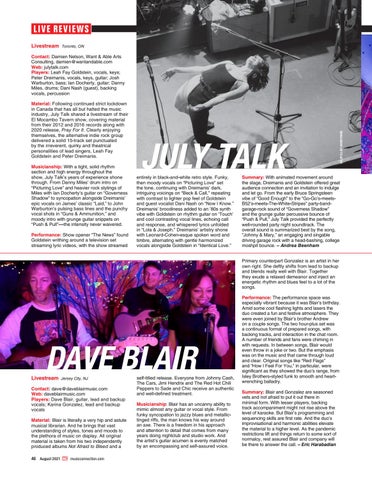 Material: Following continued strict lockdown in Canada that has all but halted the music industry, July Talk shared a livestream of their El Mocambo Tavern show, covering material from their 2012 and 2016 records along with 2020 release, Pray For It. Clearly enjoying themselves, the alternative indie rock group delivered a solid 15-track set punctuated by the irreverent, quirky and theatrical personalities of lead singers, Leah Fay Goldstein and Peter Dreimanis. Musicianship: With a tight, solid rhythm section and high energy throughout the show, July Talk’s years of experience shone through. From Danny Miles’ drum intro on “Picturing Love” and heavier rock stylings of Miles with Ian Docherty’s guitar on “Governess Shadow” to syncopation alongside Dreimanis’ epic vocals on James’ classic “Laid,” to John Warburton’s pulsing bass lines and the punchy vocal shots in “Guns &amp; Ammunition,” and moody intro with grunge guitar snippets on “Push &amp; Pull”––the intensity never waivered. Performance: Show opener “The News” found Goldstein writhing around a television set streaming lyric videos, with the show streamed

Summary: With animated movement around the stage, Dreimanis and Goldstein offered great audience connection and an invitation to indulge and let go. From the early Bruce Springsteen vibe of “Good Enough” to the “Go-Go’s-meetsB52’s-meets-The-White-Stripes” party-bandgarage-rock sound of “Governess Shadow” and the grunge guitar percussive bounce of “Push &amp; Pull,” July Talk provided the perfectly well-rounded party night soundtrack. The overall sound is summarized best by the song, “Johnny &amp; Mary,” an engaging and singable driving garage rock with a head-bashing, college moshpit bounce. – Andrea Beenham Primary counterpart Gonzalez is an artist in her own right. She deftly shifts from lead to backup and blends really well with Blair. Together they exude a relaxed demeanor and inject an energetic rhythm and blues feel to a lot of the songs.

Contact: dave@daveblairmusic.com Web: daveblairmusic.com Players: Dave Blair, guitar, lead and backup vocals; Karina Gonzalez, lead and backup vocals Material: Blair is literally a very hip and astute musical librarian. And he brings that vast understanding of styles, tones and moods to the plethora of music on display. All original material is taken from his two independently produced albums Not Afraid to Bleed and a 46 August 2021

self-titled release. Everyone from Johnny Cash, The Cars, Jimi Hendrix and The Red Hot Chili Peppers to Sade and Chic receive an authentic and well-defined treatment. Musicianship: Blair has an uncanny ability to mimic almost any guitar or vocal style. From funky syncopation to jazzy blues and metallictinged riffs, the man knows his way around an axe. There is a freedom in his approach and attention to detail that comes from many years doing nightclub and studio work. And the artist’s guitar acumen is evenly matched by an encompassing and self-assured voice.

Performance: The performance space was especially vibrant because it was Blair’s birthday. Amid some cool flashing lights and lasers the duo created a fun and festive atmosphere. They were even joined by Blair’s brother Andrew on a couple songs. The two hour-plus set was a continuous format of prepared songs, with backing tracks, and interaction in the chat room. A number of friends and fans were chiming in with requests. In between songs, Blair would even throw in a joke or two. But the emphasis was on the music and that came through loud and clear. Original songs like “Red Flags” and “How I Feel For You,” in particular, were significant as they showed the duo’s range, from Isley Brothers-styled funk to smooth and heartwrenching balladry. Summary: Blair and Gonzalez are seasoned vets and not afraid to put it out there in minimal form. With lesser players, backing track accompaniment might not rise above the level of karaoke. But Blair’s programming and sequencing skills are first rate. And the duo’s improvisational and harmonic abilities elevate the material to a higher level. As the pandemic restrictions lift and things return to some sort of normalcy, rest assured Blair and company will be there to answer the call. – Eric Harabadian 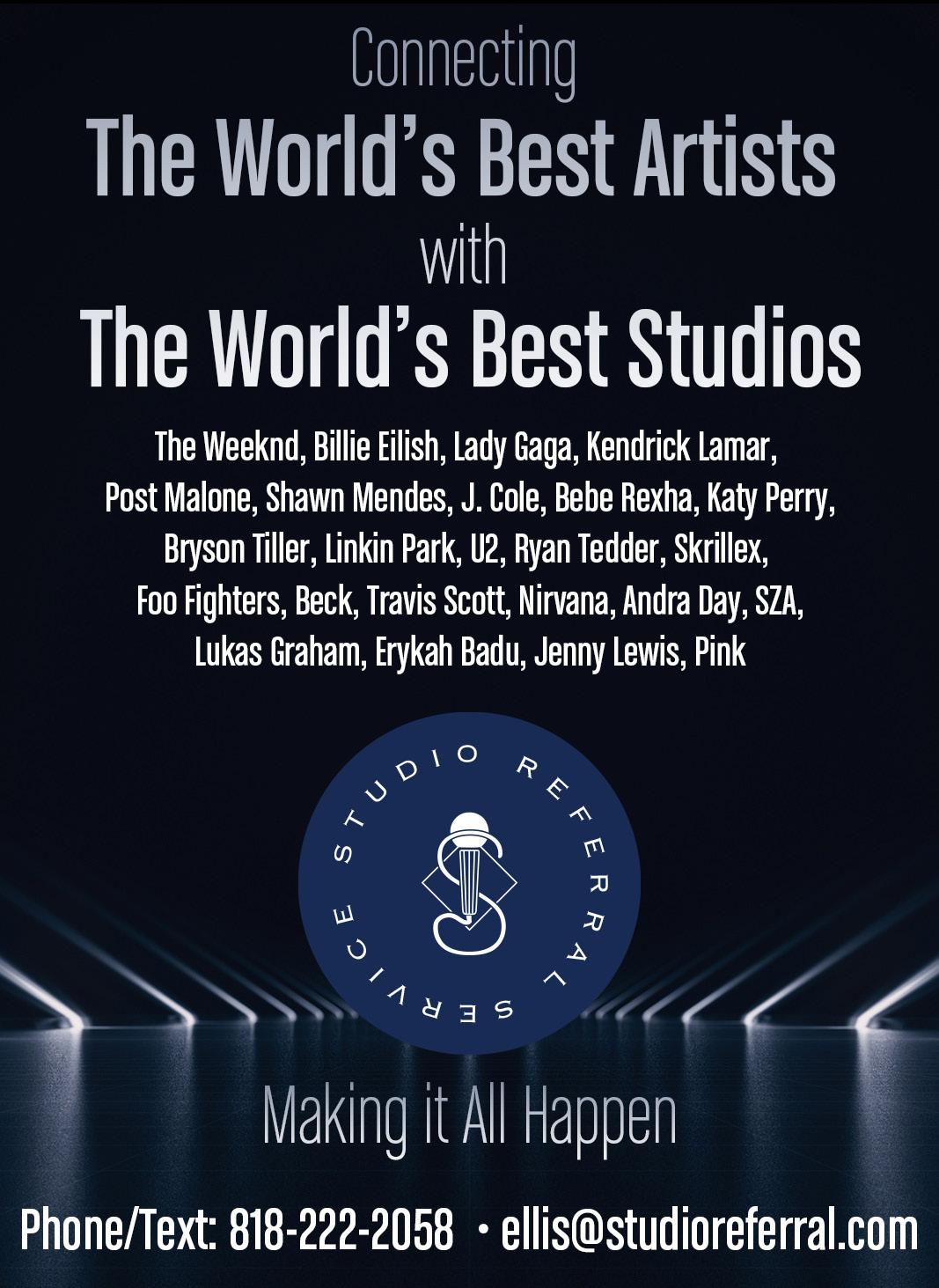 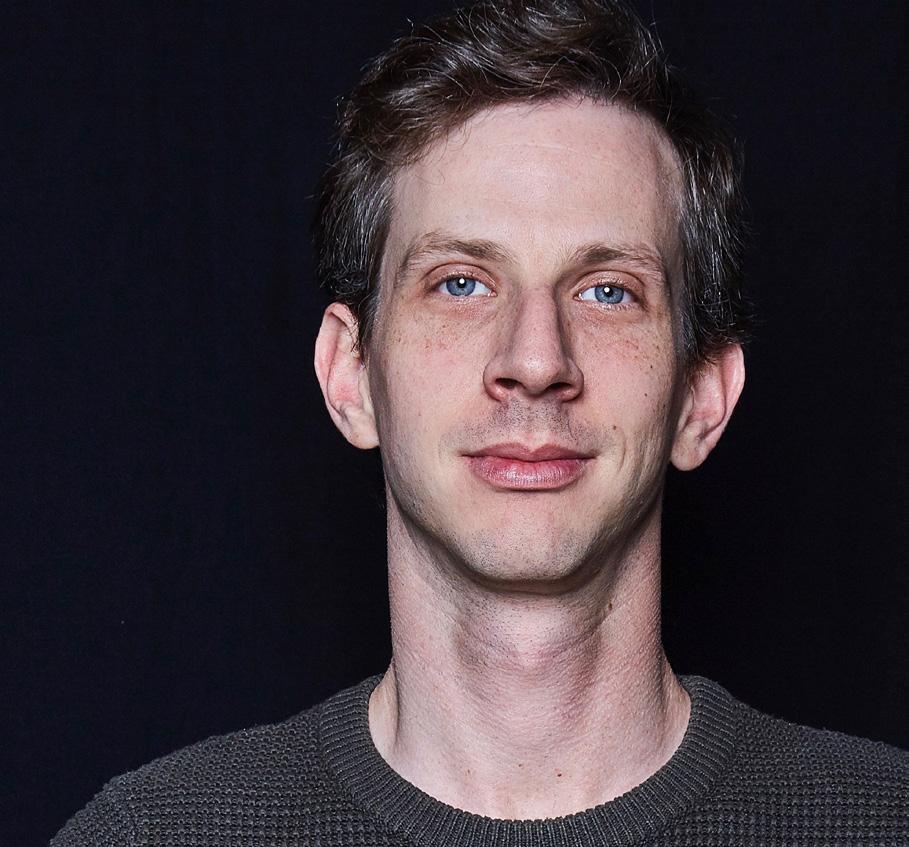 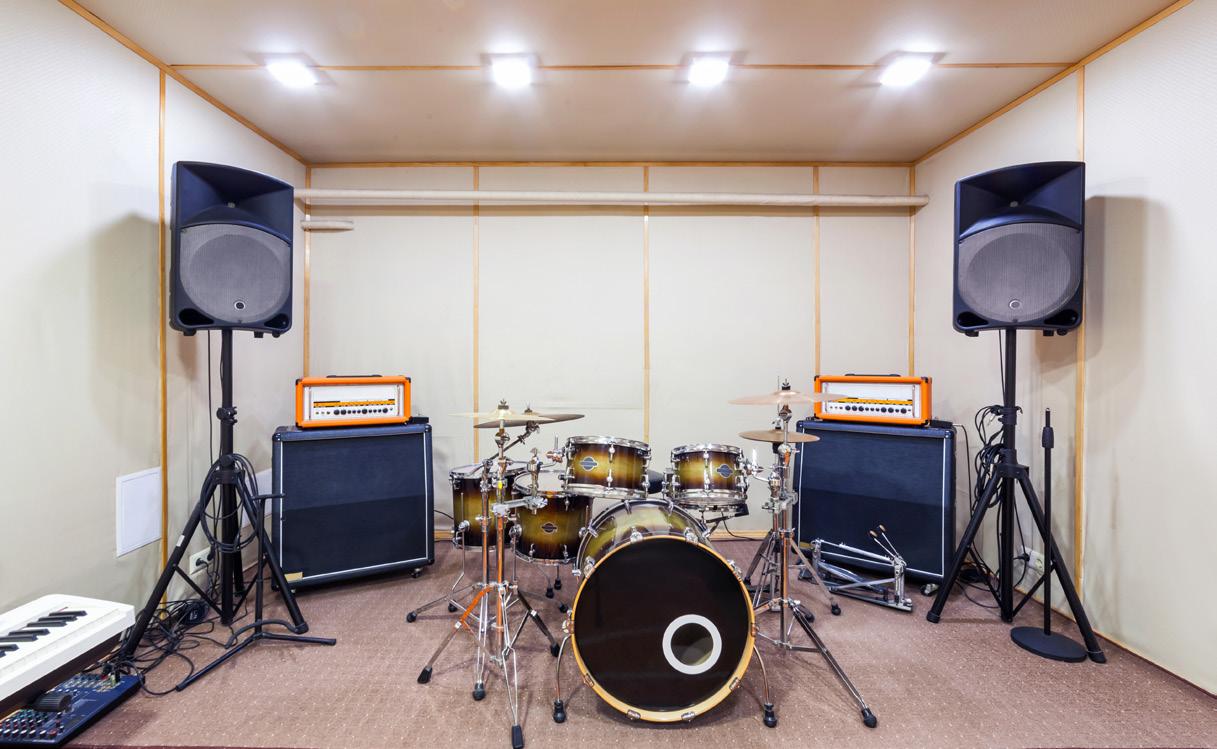