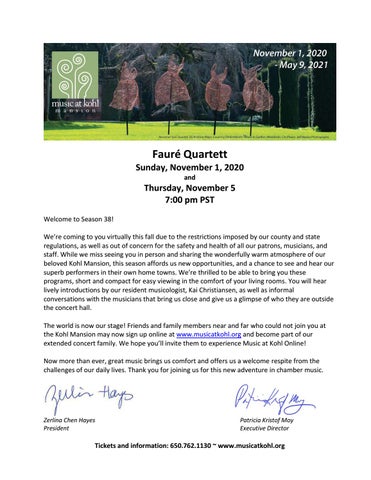 Thursday, November 5 7:00 pm PST Welcome to Season 38! We’re coming to you virtually this fall due to the restrictions imposed by our county and state regulations, as well as out of concern for the safety and health of all our patrons, musicians, and staff. While we miss seeing you in person and sharing the wonderfully warm atmosphere of our beloved Kohl Mansion, this season affords us new opportunities, and a chance to see and hear our superb performers in their own home towns. We’re thrilled to be able to bring you these programs, short and compact for easy viewing in the comfort of your living rooms. You will hear lively introductions by our resident musicologist, Kai Christiansen, as well as informal conversations with the musicians that bring us close and give us a glimpse of who they are outside the concert hall. The world is now our stage! Friends and family members near and far who could not join you at the Kohl Mansion may now sign up online at www.musicatkohl.org and become part of our extended concert family. We hope you’ll invite them to experience Music at Kohl Online! Now more than ever, great music brings us comfort and offers us a welcome respite from the challenges of our daily lives. Thank you for joining us for this new adventure in chamber music.

Program Notes Gabriel Fauré (1845-1924) Piano Quartet No. 1 in C minor, Op. 15 (1876-1879, revised in 1883) Fauré’s chamber music is dominated by ensembles with piano. In fact, only one work excludes it: the string quartet of 1924 written when he was 79, Fauré's final chamber composition. In addition to the numerous works for piano and soloist including violin and cello sonatas and a vast and widely acclaimed collection of art songs, Fauré wrote two piano quartets, two piano quintets and a piano trio, all of them superb works of the highest order. The Piano Quartet No. 1 in C minor, Op. 15 begins the series of larger ensemble works. Written between 1876-79 and revised with a new finale in 1883, it falls neatly between the music of César Franck and Maurice Ravel, suggesting appropriate and revealing comparisons. Fauré had a very distinct musical personality that was immune to the intoxication of Wagner (who affected most other French composers of the time) 2

and unaffected by the innovations of the impressionists. Yet his music is unmistakably French with a strong kinship to both the suave Romanticism of Franck and the cool sensuality of Debussy. Indeed, he was a prime force within French music as both composer and teacher and for a while was regarded among the avant-garde. The quartet's first movement amply illustrates many of these qualities. Classically, two primary themes establish vivid contrasts. The first is heavy-handed and robust with immediate pointers to Franck, (possibly Brahms) and Debussy's first quartet. Through a supple series of transformations, the theme undergoes chameleon-like changes of character and mood both within and even across movements. Franck, Fauré, Debussy and Ravel all share a French stylistic penchant for the use of thematic permutations and cyclic forms. Fauré's second theme is lyrical and winsome, flowing in ribbons of step-wise sequences that became a signature texture throughout much of his oeuvre. Here is both the essence of Fauré's counterpoint and his subtle technique of development through nuanced modulation of a near-minimalism of material. Delicate, elusive, ever flowing and shimmering, this kind of ingenious musical continuity flows straight into the music of Ravel, Fauré's most famous student. Fauré's Scherzo is fascinating. It moves throughout with the dual personality of a march and a waltz with a steady perpetual motion gently animating the entire construction. It suggests phrases such as "watch-like precision" often given to key French composers like Saint-Saëns (his teacher and mentor) and Ravel. The steady "groove" is based on a combination of a bass ostinato pattern (the pizzicato strings or the piano's left hand) and a scurrying melodic figure (in the piano's right hand or the bowed strings). Over time, the strings introduce a much more languid melody that stretches with a certain wryness like gauzy fabric over a loom. This is one part of the casual, playful humor of Fauré's scherzo, distinctive enough to become a progenitor of the specifically “French” scherzo. The other is the trio: it is surprisingly similar to the scherzo musically, but it begins on the dominant and seems to invert aspects of the bass, melody and texture for an "inside-out" and "upside-down" effect. Running through the fabric are wisps and threads of musical lines that fly off in the treble range and a merry dotted rhythm that skips and prances through the precision clockwork. The Adagio is majestic and profound, serene with a dark streak of poignancy. It opens with an elegiac theme, a stately pavane measured, reflective and somewhat grave. It gathers momentum, reaching with a more emphatic yearning that relaxes again into pastels and a dreamy nostalgia like a French café song whose languorous melancholy savors its own sorrow fondly. A dour chord wakens the reverie into a disorienting drift back through the spinning of time in wide ranging piano arpeggios; a recollection of the poised elegy sinks deeply into the lower strings under some inexorable weight of reality and the piano continues to dream, floating ever upward. Fauré concludes one of his first chamber masterpieces with a blustery, restless rhythmic tour de force that begins with a storm in a minor key and travels, moto perpetuo, a wide arc of kaleidoscopic changes to end in a surge of bright triumph, a sparkling finish awash in color and grand cadences. The magnificent swell and sweep of the finale carries in its wake a whole history of styles, textures and moods. Here one finds the Romantic heft of Franck (and maybe a hint of Brahms) waltzing with the pointillism of Ravel, the big orchestral flourishes recalling the Spanish 3

tributes of earlier Frenchman amidst the intimate, ripe lyricism characteristic of all great chamber music. For the distinctive sounds of this piano quartet, one discovers a marvelous blend of two styles. First, the surging, precisely unified rhythms in gigantic strides that are idiomatic to the great modern piano quartets. Second, the glittering melodic lines, high and impossibly delicate in the right hand such as those that Mozart first set against the velvety, long lines of a tremulous and harmonically complete string trio, the textures of the very first piano quartets. Many regard Fauré as achieving a new kind of classicism within the Romantic and early modern ages. Les berceaux, Op. 23, No. 1 (1879) Notre amour, Op. 23, No. 2 (c.1879) Fauré is especially celebrated for his contributions to French “art song” known specifically by the word mélodie, essentially the French equivalent to the German Lied. The history of French song is, naturally, long, rich and complex, but the undisputed masters of the late Romantic and early modern French mélodie are Fauré, Henri Duparc and Claude Debussy during a period that precisely corresponds with late 19th Century flowering of French instrumental chamber music, really two side of the same coin. With his gifts for melody, exquisite pianism, harmonic color and textural clarity particularly within an intimate ensemble, Fauré was perfectly suited to write music for voice and piano. Between 1861 and 1921, from the age of 16 to 76, Fauré composed over 100 mélodies, often grouped into sets and, in the latter period, thematically interrelated into remarkably innovative song cycles. The two songs on the program, transcribed for piano quartet (without voice), come from a set of three songs published in 1881 and 1882 as his op. 23. Fauré composed the first two songs in or around 1879, the very year he finished his first piano quartet, making for a wonderfully focused salon of Fauré’s music capturing his first flush of fame in his early thirties. The two songs also present a perfect contrast of topic, sentiment and corresponding musical expression, a revealing yin and yang of Fauré’s art song. Les berceaux (Cradles), written to a text by French poet and Nobel laureate Sully Prudhomme compares a mother’s gentle rocking of a child’s cradle to the watery rocking of the harbor-bound wooden ships that will eventually steal the child away as it grows into a young man driven by wanderlust to take to the sea. The undulating piano figurations gently rock beneath a slowly moving sorrowful melody in a three-part musical narrative. In vivid contrast, Notre amour (Our Love), to a text by the French Parnassian poet Paul-Armand Silvestre, is a bright, joyful and lively patter song in five verses extolling five qualities of love: light, charming, sacred, infinite and eternal. Each stanza features unique changes and embellishments of melody, harmony, texture and figuration creating a light, fluffy and particularly delicious musical ambrosia. © 2020 Kai Christiansen and Music at Kohl Mansion. Kai Christiansen is a musicologist, writer, and lecturer on chamber music, and is the founder of earsense.org, an online chamber music exploratorium.

Meet The Musicians: Fauré Quartett Erika Geldsetzer, violin Sascha Frömbling, viola Konstantin Heidrich, cello Dirk Mommertz, piano “The Fauré Quartet is right up there with the best ensembles you can listen to today” Harald Eggebrecht, Süddeutsche Zeitung The requirements have changed. Whoever is playing chamber music today can’t be limited to the rules from decades ago. The expectations regarding the diversity of repertoire have changed, which creates room for ensembles like the Fauré Quartett, which has established itself as one of the world’s leading piano quartets within just a few years. Dirk Mommertz (piano), Erika Geldsetzer (violin), Sascha Frömbling (viola) and Konstantin Heidrich (cello) use the opportunities arising from these developments. They discover new sound fields in chamber music and perform compositions outside the mainstream repertoire. They are visionary in their approach and highly regarded for their experiments and discoveries; be it performances with the NDR Big Band, collaborations with artists like Rufus Wainwright or Sven Helbig, appearances in clubs like the Berghain, Cocoon Club or “Le Poisson Rouge” in New York or TV shows in KIKA or “Rhapsody in School”, getting children excited in chamber music. When they released their album “Popsongs” in 2009, there was a great deal of buzz in the press and audience. In the following year, the ensemble was awarded the ECHO Classic for their album “classic beyond borders”, their second award after their recording of Brahms’ piano quartets (Chamber Music recording of the year, 2008). Other prizes include the German Music Competition, the ensemble prize from Festspiele Mecklenburg-Vorpommern, international competition and recording awards, Music Prize Duisburg and Brahms prize Schleswig Holstein. The musicians of the Fauré Quartett are pioneers in many ways. After they met during their studies in 1995 in Karlsruhe for the 150th anniversary of Gabriel Fauré, they quickly realized, that this combination offered new insights into undiscovered repertoire. In 2006, they signed a contract with Deutsche Grammophon, promoting them to the Champions League of the classic music business. They made highly regarded benchmark-recordings with works by Mozart, Brahms, Mendelssohn and pop songs from Peter Gabriel and Steely Dan. Worldwide tours raise their profile abroad and international masterclasses are part of their work with students. The members teach at the universities of Berlin and Essen. Moreover, they are Artistic Directors of “Festspielfrühling Rügen” as well as ‘Quartet in Residence’ at the University of Music Karlsruhe. During their tours, the musicians appear in the world’s most important chamber music venues; including Concertgebouw Amsterdam, Alte Oper Frankfurt, Berlin Philharmony, Teatro Colon Buenos Aires and Wigmore Hall London. All these mosaics form a unique profile for this defining chamber music ensemble.