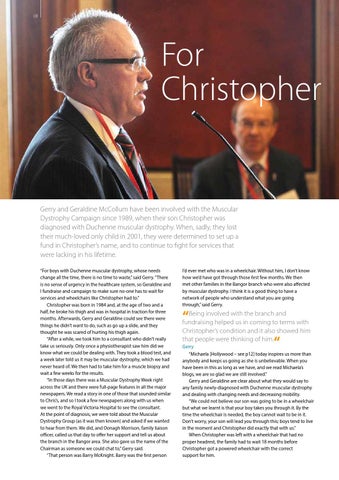 Gerry and Geraldine McCollum have been involved with the Muscular Dystrophy Campaign since 1989, when their son Christopher was diagnosed with Duchenne muscular dystrophy. When, sadly, they lost their much-loved only child in 2001, they were determined to set up a fund in Christopher’s name, and to continue to fight for services that were lacking in his lifetime. “For boys with Duchenne muscular dystrophy, whose needs change all the time, there is no time to waste,” said Gerry. “There is no sense of urgency in the healthcare system, so Geraldine and I fundraise and campaign to make sure no-one has to wait for services and wheelchairs like Christopher had to.” Christopher was born in 1984 and, at the age of two and a half, he broke his thigh and was in hospital in traction for three months. Afterwards, Gerry and Geraldine could see there were things he didn’t want to do, such as go up a slide, and they thought he was scared of hurting his thigh again. “After a while, we took him to a consultant who didn’t really take us seriously. Only once a physiotherapist saw him did we know what we could be dealing with. They took a blood test, and a week later told us it may be muscular dystrophy, which we had never heard of. We then had to take him for a muscle biopsy and wait a few weeks for the results. “In those days there was a Muscular Dystrophy Week right across the UK and there were full-page features in all the major newspapers. We read a story in one of those that sounded similar to Chris’s, and so I took a few newspapers along with us when we went to the Royal Victoria Hospital to see the consultant. At the point of diagnosis, we were told about the Muscular Dystrophy Group (as it was then known) and asked if we wanted to hear from them. We did, and Oonagh Morrison, family liaison officer, called us that day to offer her support and tell us about the branch in the Bangor area. She also gave us the name of the Chairman as someone we could chat to,” Gerry said. “That person was Barry McKnight. Barry was the first person

I’d ever met who was in a wheelchair. Without him, I don’t know how we’d have got through those first few months. We then met other families in the Bangor branch who were also affected by muscular dystrophy. I think it is a good thing to have a network of people who understand what you are going through,” said Gerry.

Christopher’s condition and it also showed him that people were thinking of him. Gerry

“Michaela [Hollywood – see p12] today inspires us more than anybody and keeps us going as she is unbelievable. When you have been in this as long as we have, and we read Michaela’s blogs, we are so glad we are still involved.” Gerry and Geraldine are clear about what they would say to any family newly-diagnosed with Duchenne muscular dystrophy and dealing with changing needs and decreasing mobility. “We could not believe our son was going to be in a wheelchair but what we learnt is that your boy takes you through it. By the time the wheelchair is needed, the boy cannot wait to be in it. Don’t worry, your son will lead you through this; boys tend to live in the moment and Christopher did exactly that with us.” When Christopher was left with a wheelchair that had no proper headrest, the family had to wait 18 months before Christopher got a powered wheelchair with the correct support for him. 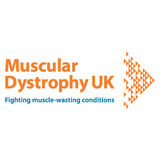