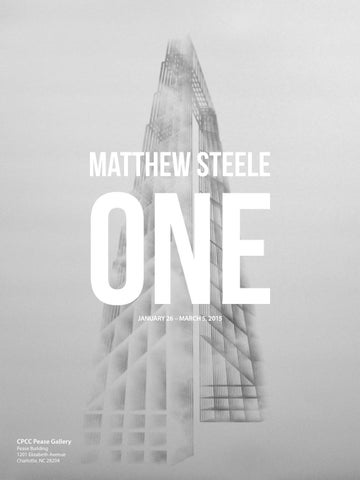 BIO Matthew Steele is a sculptor living and working in Charlotte North Carolina. His intricately constructed wood forms explore our human efforts to communicate, to feel, and to overcome our greatest obstacles. With a degree in sculpture from Indiana University Bloomington, Steele came to Charlotte in January 2012 for a McColl Center for Art + Innovation Artist Residency. The exhibition â&amp;#x20AC;&amp;#x153;Matthew Steele: ONEâ&amp;#x20AC;? marks his first solo exhibition in Charlotte.

INTERVIEW Grace Cote: Let’s start with the premise. Matthew Steele: It’s all about reclaiming the monument for public space to things that aren’t tied to nationalism and religion, things we can all identify with. I thought about what that is and what I found is that it’s the way we naturally feel. What happens when we distill those emotions down into things we all identify with, past our cultural separators? I wanted to talk about those emotions. GC: But monuments already celebrate a struggle or important victory, so they are already very laden with emotion. Are you pulling out the existing emotion or do you see your work as a wholely different lens? MS: Well this is going to sound cynical, but all propaganda preys on emotion and that’s how it works. That’s not really a commentary on monuments being a good thing or a bad thing in a nationalist sense. Emotion is what makes a monument successful; what I’m trying to do is distill monuments from their iconography and history, the things that make them specific to a people or a time because if you strip it down, of course there’s emotion there. This works because of that precedent.

GC: What kind of emotions did you decide to portray? MS: When I look back, it’s a lot of fairly negative emotions. That’s probably more of a reflection on me than anyone else because I think that internally I’m not always happy-go-lucky. These are emotions that have this lasting effect, just like positive feelings can, but think about the example of how people used to learn: by nuns hitting them. Something about that resonates in people. That weight and longevity is attractive to me, and definitely compelling. I really just went with the ones that bubbled to the surface. There wasn’t a lot of strategy picking them, it was just sort of thinking about an emotion and thinking about if I can make a strong visual metaphor, or if am I compelled to make one.

GC: What’s your process like when you’re planning out a body of work like this? MS: It’s really pretty fast. I know that I’m the type of person that needs to give myself assignments, and I work best with structure and parameters. So inherently the work has cohesion when I give myself those rules, whether they are process oriented, visual or conceptual rules, I really try to give myself a lot and that’s what works for me, and that’s probably why the work looks tight and controlled. It is. I did that. GC: Could you talk more about how you made the transition from architectural forms to sculptures based on emotion? Why the change? MS: I don’t think there is much of a change. This is using the same language to talk about something else. Even my previous work that seemed strictly architectural was never just that. They were always trying to personify what we make, how we make it, and what’s inherently human about that. This is just a little more specific in what it’s addressing.

GC: Yes, it is the same visual language, but you’re projecting a new meaning on it, and it becomes so much more powerful. MS: Yes, there are elements in this that are more literal. The work that I made last year, I was pulling architectural narratives out of things I was looking at and essentially abstracting it. This is much more narrative based. There’s human scale that I’m considering all the time when before I left that as ambiguous as possible. I’m trying to be very intentional with the scale here.

GC: What about the aspect of including your audience more? For example, you use mirrors in Monument to Regret (2014) to force your audience into the artwork. MS: I have always had this urge to get people to see specific moments in the work, and I saw this show as an opportunity to highlight those moments. Monument to Regret doesn’t work without the mirrors; the form is doing something but as it channels your image, it’s actually creating a form internally that only you’re looking at, but that is so much bigger than you. It’s gigantic and overwhelming, and I think that’s the feeling of regret. Wherever you move, it’s there.

GC: This work is especially strong in its relatability. I think people will say “well, for me it means...” You know? MS: Yeah, and it’s in no way an attempt for me to tell you how your emotions feel. I’m not saying this is what an emotion is; it’s my personal physical representation. Hopefully it does relate to you, but I do worry about having that strong of a voice and saying “I know what the emotion fear looks like, I will portray that for you!” Because I do struggle with how these are personal things that I can never know from anyone’s perspective but my own. But hopefully there’s a communion that can happen when people consider an intangible and subjective feeling they have and how this static object can portray that. GC: It may feel like a therapy session. MS: I think I’ll need to bring in a couch.

Interview publication with Matthew Steele discussing his solo exhibition, ONE.