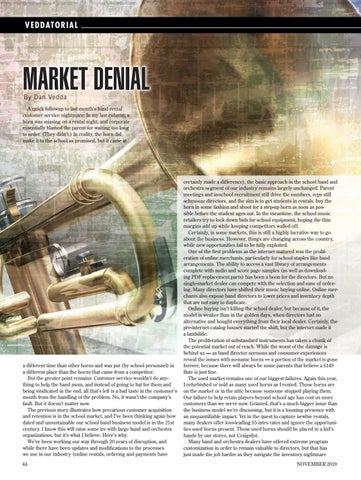 A quick followup to last month’s band rental customer service nightmare: In my last column, a horn was missing on a rental night, and corporate essentially blamed the parent for waiting too long to order. (They didn’t.) In reality, the horn did make it to the school as promised, but it came at

a different time than other horns and was put (by school personnel) in a different place than the horns that came from a competitor. But the greater point remains: Customer service wouldn’t do anything to help the band mom, and instead of going to bat for them and being vindicated in the end, all that’s left is a bad taste in the customer’s mouth from the handling of the problem. No, it wasn’t the company’s fault. But it doesn’t matter now. The previous story illustrates how precarious customer acquisition and retention is in the school market, and I’ve been thinking again how dated and unsustainable our school band business model is in the 21st century. I know this will raise some ire with large band and orchestra organizations, but it’s what I believe. Here’s why. We’ve been working our way through 20 years of disruption, and while there have been updates and modifications to the processes we use in our industry (online rentals, ordering and payments have 44

certainly made a difference), the basic approach in the school band and orchestra segment of our industry remains largely unchanged. Parent meetings and in-school recruitment still drive the numbers, reps still schmooze directors, and the aim is to get students in rentals, buy the horn in some fashion and shoot for a step-up horn as soon as possible before the student ages out. In the meantime, the school music retailers try to lock down bids for school equipment, hoping the thin margins add up while keeping competitors walled off. Certainly, in some markets, this is still a highly lucrative way to go about the business. However, things are changing across the country, while new opportunities fail to be fully exploited. One of the first problems as the internet matured was the proliferation of online merchants, particularly for school staples like band arrangements. The ability to access a vast library of arrangements complete with audio and score page samples (as well as downloading PDF replacement parts) has been a boon for the directors. But no single-market dealer can compete with the selection and ease of ordering. Many directors have shifted their music buying online. Online merchants also expose band directors to lower prices and inventory depth that are not easy to duplicate. Online buying isn’t killing the school dealer, but because of it, the model is weaker than in the golden days, when directors had no alternative and bought everything from their local dealer. Certainly, the pre-internet catalog houses started the shift, but the internet made it a landslide. The proliferation of substandard instruments has taken a chunk of the potential market out of reach. While the worst of the damage is behind us — as band director sermons and consumer experiences reveal the issues with no-name horns — a portion of the market is gone forever, because there will always be some parents that believe a $149 flute is just fine. The used market remains one of our biggest failures. Again this year, I refurbished or sold as many used horns as I rented. Those horns are on the market or in the attic because someone stopped playing them. Our failure to help retain players beyond school age has cost us more customers than we serve now. Granted, that’s a much bigger issue than the business model we’re discussing, but it is a looming presence with an unquantifiable impact. Yet in the quest to capture newbie rentals, many dealers offer loss-leading $5 intro rates and ignore the opportunities used horns present. Those used horns should be placed in a kid’s hands by our stores, not Craigslist. Many band and orchestra dealers have offered extreme program customization in order to remain valuable to directors, but that has just made the job harder as they navigate the inventory nightmare NOVEMBER 2019

In the November issue of the Music & Sound Retailer, learn the state of the accessories and bags and cases market, check out our salute to lesser publicized products, and much more.