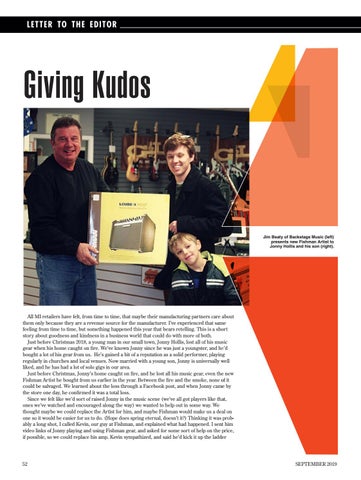 All MI retailers have felt, from time to time, that maybe their manufacturing partners care about them only because they are a revenue source for the manufacturer. I’ve experienced that same feeling from time to time, but something happened this year that bears retelling. This is a short story about goodness and kindness in a business world that could do with more of both. Just before Christmas 2018, a young man in our small town, Jonny Hollis, lost all of his music gear when his home caught on fire. We’ve known Jonny since he was just a youngster, and he’d bought a lot of his gear from us. He’s gained a bit of a reputation as a solid performer, playing regularly in churches and local venues. Now married with a young son, Jonny is universally well liked, and he has had a lot of solo gigs in our area. Just before Christmas, Jonny’s home caught on fire, and he lost all his music gear, even the new Fishman Artist he bought from us earlier in the year. Between the fire and the smoke, none of it could be salvaged. We learned about the loss through a Facebook post, and when Jonny came by the store one day, he confirmed it was a total loss. Since we felt like we’d sort of raised Jonny in the music scene (we’ve all got players like that, ones we’ve watched and encouraged along the way) we wanted to help out in some way. We thought maybe we could replace the Artist for him, and maybe Fishman would make us a deal on one so it would be easier for us to do. (Hope does spring eternal, doesn’t it?) Thinking it was probably a long shot, I called Kevin, our guy at Fishman, and explained what had happened. I sent him video links of Jonny playing and using Fishman gear, and asked for some sort of help on the price, if possible, so we could replace his amp. Kevin sympathized, and said he’d kick it up the ladder