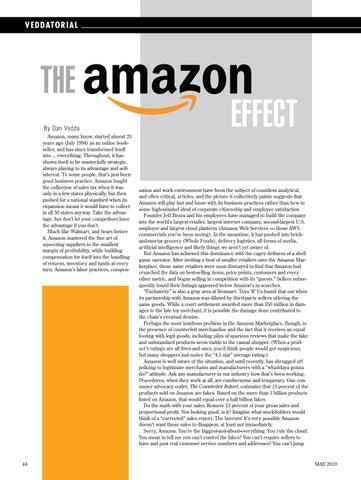 THE By Dan Vedda Amazon, many know, started almost 25 years ago (July 1994) as an online bookseller, and has since transformed itself into ... everything. Throughout, it has shown itself to be masterfully strategic, always playing to its advantage and selfinterest. To some people, that’s just been good business practice. Amazon fought the collection of sales tax when it was only in a few states physically, but then pushed for a national standard when its expansion meant it would have to collect in all 50 states anyway. Take the advantage, but don’t let your competitors have the advantage if you don’t. Much like Walmart, and Sears before it, Amazon mastered the fine art of squeezing suppliers to the smallest margin of profitability, while building compensation for itself into the handling of returns, inventory and funds at every turn. Amazon’s labor practices, compen-

EFFECT sation and work environment have been the subject of countless analytical, and often critical, articles, and the picture it collectively paints suggests that Amazon will play fast and loose with its business practices rather than hew to some high-minded ideal of corporate citizenship and employee satisfaction. Founder Jeff Bezos and his employees have managed to build the company into the world’s largest retailer, largest internet company, second-largest U.S. employer and largest cloud platform (Amazon Web Services — those AWS commercials you’ve been seeing). In the meantime, it has pushed into brickand-mortar grocery (Whole Foods), delivery logistics, all forms of media, artificial intelligence and likely things we aren’t yet aware of. But Amazon has achieved this dominance with the cagey deftness of a shell game operator. After inviting a host of smaller retailers onto the Amazon Marketplace, those same retailers were soon dismayed to find that Amazon had crunched the data on best-selling items, price points, customers and every other metric, and began selling in competition with its “guests.” Sellers subsequently found their listings appeared below Amazon’s in searches. “Exclusivity” is also a gray area at Bezmart. Toys ‘R’ Us found that out when its partnership with Amazon was diluted by third-party sellers offering the same goods. While a court settlement awarded more than $50 million in damages to the late toy merchant, it is possible the damage done contributed to the chain’s eventual demise. Perhaps the most insidious problem in the Amazon Marketplace, though, is the presence of counterfeit merchandise and the fact that it receives an equal footing with legit goods, including piles of spurious reviews that make the fake and substandard products seem viable to the casual shopper. (When a product’s ratings are all fives and ones, you’d think people would get suspicious, but many shoppers just notice the “4.5 star” average rating.) Amazon is well aware of the situation, and until recently, has shrugged off policing to legitimate merchants and manufacturers with a “whaddaya gonna do?” attitude. Ask any manufacturer in our industry how that’s been working. Procedures, when they work at all, are cumbersome and temporary. One consumer advocacy outlet, The Counterfeit Report, estimates that 13 percent of the products sold on Amazon are fakes. Based on the more than 5 billion products listed on Amazon, that would equal over a half billion fakes. Do the math with your sales. Remove 13 percent of your gross sales and proportional profit. Not looking good, is it? Imagine what stockholders would think of a “corrected” sales report. The horrors! It’s very possible Amazon doesn’t want those sales to disappear, at least not immediately. Sorry, Amazon. You’re the biggest-just-about-everything. You rule the cloud. You mean to tell me you can’t control the fakes? You can’t require sellers to have and post real customer service numbers and addresses? You can’t jump