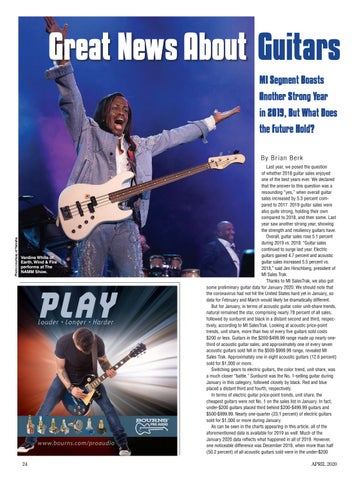 Great News About Guitars MI Segment Boasts Another Strong Year in 2019, But What Does the Future Hold?

Last year, we posed the question of whether 2018 guitar sales enjoyed one of the best years ever. We declared that the answer to this question was a resounding “yes,” when overall guitar sales increased by 5.3 percent compared to 2017. 2019 guitar sales were also quite strong, holding their own compared to 2018, and then some. Last year saw another strong year, showing the strength and resiliency guitars have. Overall, guitar sales rose 5.1 percent during 2019 vs. 2018. “Guitar sales continued to surge last year. Electric guitars gained 4.7 percent and acoustic guitar sales increased 5.5 percent vs. 2018,” said Jim Hirschberg, president of MI Sales Trak. Thanks to MI SalesTrak, we also got some preliminary guitar data for January 2020. We should note that the coronavirus had not hit the United States hard yet in January, so data for February and March would likely be dramatically different. But for January, in terms of acoustic guitar color unit-share trends, natural remained the star, comprising nearly 78 percent of all sales, followed by sunburst and black in a distant second and third, respectively, according to MI SalesTrak. Looking at acoustic price-point trends, unit share, more than two of every five guitars sold costs $200 or less. Guitars in the $200-$499.99 range made up nearly onethird of acoustic guitar sales, and approximately one of every seven acoustic guitars sold fell in the $500-$999.99 range, revealed MI Sales Trak. Approximately one in eight acoustic guitars (12.6 percent) sold for $1,000 or more. Switching gears to electric guitars, the color trend, unit share, was a much closer “battle.” Sunburst was the No. 1-selling guitar during January in this category, followed closely by black. Red and blue placed a distant third and fourth, respectively. In terms of electric guitar price-point trends, unit share, the cheapest guitars were not No. 1 on the sales list in January. In fact, under-$200 guitars placed third behind $200-$499.99 guitars and $500-$999.99. Nearly one-quarter (23.1 percent) of electric guitars sold for $1,000 or more during January. As can be seen in the charts appearing in this article, all of the aforementioned data is available for 2019 as well. Much of the January 2020 data reflects what happened in all of 2019. However, one noticeable difference was December 2019, when more than half (50.2 percent) of all acoustic guitars sold were in the under-$200

In the April issue of the Music & Sound Retailer, we offer our annual guitar update, look at new companies that launched at The NAMM Show, and offer a special story about the commercial installation market.