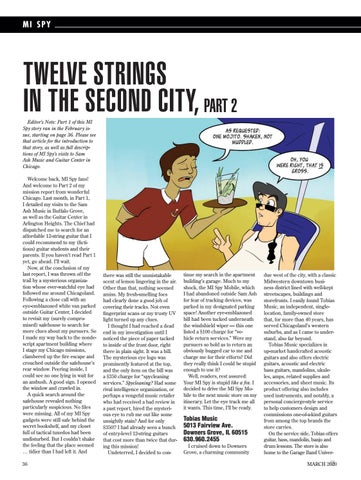 Editor’s Note: Part 1 of this MI Spy story ran in the February issue, starting on page 36. Please see that article for the introduction to that story, as well as full descriptions of MI Spy’s visits to Sam Ash Music and Guitar Center in Chicago.

Welcome back, MI Spy fans! And welcome to Part 2 of my mission report from wonderful Chicago. Last month, in Part 1, I detailed my visits to the Sam Ash Music in Buffalo Grove, as well as the Guitar Center in Arlington Heights. The Chief had dispatched me to search for an affordable 12-string guitar that I could recommend to my (fictitious) guitar students and their parents. If you haven’t read Part 1 yet, go ahead. I’ll wait. Now, at the conclusion of my last report, I was thrown off the trail by a mysterious organization whose ever-watchful eye had followed me around Chicagoland. Following a close call with an eye-emblazoned white van parked outside Guitar Center, I decided to revisit my (surely compromised) safehouse to search for more clues about my pursuers. So I made my way back to the nondescript apartment building where I stage my Chicago missions, clambered up the fire escape and crouched outside the safehouse’s rear window. Peering inside, I could see no one lying in wait for an ambush. A good sign. I opened the window and crawled in. A quick search around the safehouse revealed nothing particularly suspicious. No files were missing. All of my MI Spy gadgets were still safe behind the secret bookshelf, and my closet full of tactical tuxedos had been undisturbed. But I couldn’t shake the feeling that the place seemed … tidier than I had left it. And 36

there was still the unmistakable scent of lemon lingering in the air. Other than that, nothing seemed amiss. My fresh-smelling foes had clearly done a good job of covering their tracks. Not even fingerprint scans or my trusty UV light turned up any clues. I thought I had reached a dead end in my investigation until I noticed the piece of paper tacked to inside of the front door, right there in plain sight. It was a bill. The mysterious eye logo was prominently featured at the top, and the only item on the bill was a $350 charge for “spycleaning services.” Spycleaning? Had some rival intelligence organization, or perhaps a vengeful music retailer who had received a bad review in a past report, hired the mysterious eye to rub me out like some unsightly stain? And for only $350!? I had already seen a bunch of entry-level 12-string guitars that cost more than twice that during this mission! Undeterred, I decided to con-

tinue my search in the apartment building’s garage. Much to my shock, the MI Spy Mobile, which I had abandoned outside Sam Ash for fear of tracking devices, was parked in my designated parking space! Another eye-emblazoned bill had been tucked underneath the windshield wiper — this one listed a $100 charge for “vehicle return services.” Were my pursuers so bold as to return an obviously bugged car to me and charge me for their efforts? Did they really think I could be stupid enough to use it? Well, readers, rest assured: Your MI Spy is stupid like a fox. I decided to drive the MI Spy Mobile to the next music store on my itinerary. Let the eye track me all it wants. This time, I’ll be ready.

I cruised down to Downers Grove, a charming community

due west of the city, with a classic Midwestern downtown business district lined with well-kept streetscapes, buildings and storefronts. I easily found Tobias Music, an independent, singlelocation, family-owned store that, for more than 40 years, has served Chicagoland’s western suburbs, and as I came to understand, also far beyond. Tobias Music specializes in up-market handcrafted acoustic guitars and also offers electric guitars, acoustic and electric bass guitars, mandolins, ukuleles, amps, related supplies and accessories, and sheet music. Its product offering also includes used instruments, and notably, a personal concierge-style service to help customers design and commissions one-of-a-kind guitars from among the top brands the store carries. On the service side, Tobias offers guitar, bass, mandolin, banjo and drum lessons. The store is also home to the Garage Band UniverMARCH 2020