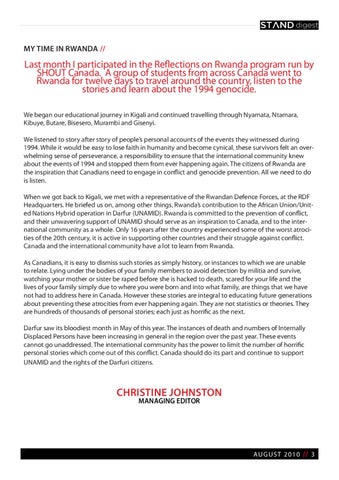 MY TIME IN RWANDA //

Last month I participated in the Reflections on Rwanda program run by SHOUT Canada. A group of students from across Canada went to Rwanda for twelve days to travel around the country, listen to the stories and learn about the 1994 genocide. We began our educational journey in Kigali and continued travelling through Nyamata, Ntamara, Kibuye, Butare, Bisesero, Murambi and Gisenyi. We listened to story after story of peopleâ&amp;#x20AC;&amp;#x2122;s personal accounts of the events they witnessed during 1994. While it would be easy to lose faith in humanity and become cynical, these survivors felt an overwhelming sense of perseverance, a responsibility to ensure that the international community knew about the events of 1994 and stopped them from ever happening again. The citizens of Rwanda are the inspiration that Canadians need to engage in conflict and genocide prevention. All we need to do is listen. When we got back to Kigali, we met with a representative of the Rwandan Defence Forces, at the RDF Headquarters. He briefed us on, among other things, Rwandaâ&amp;#x20AC;&amp;#x2122;s contribution to the African Union/United Nations Hybrid operation in Darfur (UNAMID). Rwanda is committed to the prevention of conflict, and their unwavering support of UNAMID should serve as an inspiration to Canada, and to the international community as a whole. Only 16 years after the country experienced some of the worst atrocities of the 20th century, it is active in supporting other countries and their struggle against conflict. Canada and the international community have a lot to learn from Rwanda. As Canadians, it is easy to dismiss such stories as simply history, or instances to which we are unable to relate. Lying under the bodies of your family members to avoid detection by militia and survive, watching your mother or sister be raped before she is hacked to death, scared for your life and the lives of your family simply due to where you were born and into what family, are things that we have not had to address here in Canada. However these stories are integral to educating future generations about preventing these atrocities from ever happening again. They are not statistics or theories. They are hundreds of thousands of personal stories; each just as horrific as the next. Darfur saw its bloodiest month in May of this year. The instances of death and numbers of Internally Displaced Persons have been increasing in general in the region over the past year. These events cannot go unaddressed. The international community has the power to limit the number of horrific personal stories which come out of this conflict. Canada should do its part and continue to support UNAMID and the rights of the Darfuri citizens.

Since its founding in 2005, STAND has become the leading organization in Canada for youth led anti-genocide advocacy and activism. We are dedicated to making it easy to act against genocide. Through tools like 1-800-Genocide and our monthly STAND Digest, we make it easy for Canadians to stay updated on the current situation in Darfur and provide them with actions they can do on a daily basis to make a difference.