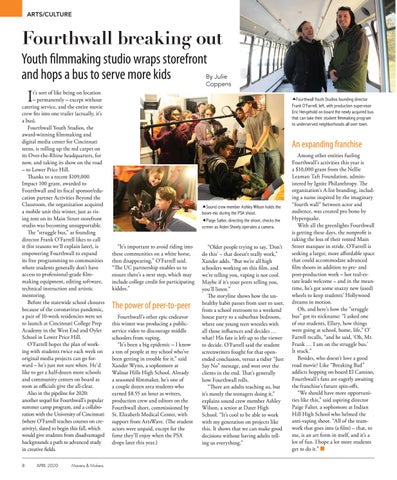 t’s sort of like being on location – permanently – except without catering service, and the entire movie crew fits into one trailer (actually, it’s a bus). Fourthwall Youth Studios, the award-winning filmmaking and digital media center for Cincinnati teens, is rolling up the red carpet on its Over-the-Rhine headquarters, for now, and taking its show on the road – to Lower Price Hill. Thanks to a recent $109,000 Impact 100 grant, awarded to Fourthwall and its fiscal sponsor/education partner Activities Beyond the Classroom, the organization acquired a mobile unit this winter, just as rising rent on its Main Street storefront studio was becoming unsupportable. The “struggle bus,” as founding director Frank O’Farrell likes to call it (for reasons we’ll explain later), is empowering Fourthwall to expand its free programming to communities where students generally don’t have access to professional-grade filmmaking equipment, editing software, technical instruction and artistic mentoring. Before the statewide school closures because of the coronavirus pandemic, a pair of 10-week residencies were set to launch at Cincinnati College Prep Academy in the West End and Oyler School in Lower Price Hill. O’Farrell hopes the plan of working with students twice each week on original media projects can go forward – he’s just not sure when. He’d like to get a half-dozen more schools and community centers on board as soon as officials give the all-clear. Also in the pipeline for 2020: another sequel for Fourthwall’s popular summer camp program, and a collaboration with the University of Cincinnati (where O’Farrell teaches courses on creativity), slated to begin this fall, which would give students from disadvantaged backgrounds a path to advanced study in creative fields. 8

Fourthwall Youth Studios founding director Frank O’Farrell, left, with production supervisor Eric Hengehold on board the newly acquired bus that can take their student filmmaking program to underserved neighborhoods all over town.

“It’s important to avoid riding into these communities on a white horse, then disappearing,” O’Farrell said. “The UC partnership enables us to ensure there’s a next step, which may include college credit for participating kiddos.”

The power of peer-to-peer Fourthwall’s other epic endeavor this winter was producing a publicservice video to discourage middle schoolers from vaping. “It’s been a big epidemic – I know a ton of people at my school who’ve been getting in trouble for it,” said Xander Wynn, a sophomore at Walnut Hills High School. Already a seasoned filmmaker, he’s one of a couple dozen area students who earned $8.55 an hour as writers, production crew and editors on the Fourthwall short, commissioned by St. Elizabeth Medical Center, with support from ArtsWave. (The student actors were unpaid, except for the fame they’ll enjoy when the PSA drops later this year.)

“Older people trying to say, ‘Don’t do this’ – that doesn’t really work,” Xander adds. “But we’re all high schoolers working on this film, and we’re telling you, vaping is not cool. Maybe if it’s your peers telling you, you’ll listen.” The storyline shows how the unhealthy habit passes from user to user, from a school restroom to a weekend house party to a suburban bedroom, where one young teen wrestles with all those influences and decides … what? His fate is left up to the viewer to decide. O’Farrell said the student screenwriters fought for that openended conclusion, versus a tidier “Just Say No” message, and won over the clients in the end. That’s generally how Fourthwall rolls. “There are adults teaching us, but it’s mostly the teenagers doing it,” explains sound crew member Ashley Wilson, a senior at Dater High School. “It’s cool to be able to work with my generation on projects like this. It shows that we can make good decisions without having adults telling us everything.”

Among other entities fueling Fourthwall’s activities this year is a $10,000 grant from the Nellie Leaman Taft Foundation, administered by Ignite Philanthropy. The organization’s A-list branding, including a name inspired by the imaginary “fourth wall” between actor and audience, was created pro bono by Hyperquake. With all the greenlights Fourthwall is getting these days, the nonprofit is taking the loss of their rented Main Street marquee in stride. O’Farrell is seeking a larger, more affordable space that could accommodate advanced film shoots in addition to pre- and post-production work – hot real-estate leads welcome – and in the meantime, he’s got some snazzy new (used) wheels to keep students’ Hollywood dreams in motion. Oh, and here’s how the “struggle bus” got its nickname: “I asked one of our students, Ellary, how things were going at school, home, life,” O’ Farrell recalls, “and he said, ‘Oh, Mr. Frank … I am on the struggle bus.’ It stuck.” Besides, who doesn’t love a good road movie? Like “Breaking Bad” addicts hopping on board El Camino, Fourthwall’s fans are eagerly awaiting the franchise’s future spin-offs. “We should have more opportunities like this,” said aspiring director Paige Falter, a sophomore at Indian Hill High School who helmed the anti-vaping shoot. “All of the teamwork that goes into (a film) – that, to me, is an art form in itself, and it’s a lot of fun. I hope a lot more students get to do it.”  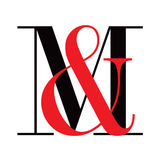