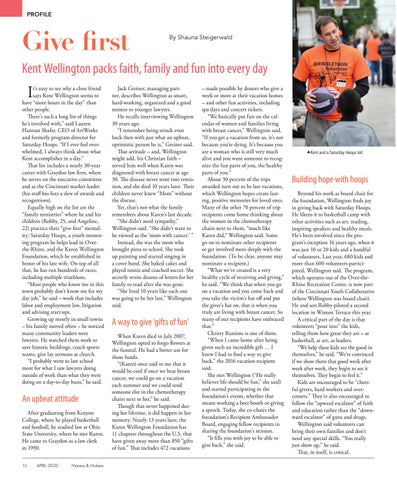 Kent Wellington packs faith, family and fun into every day

t’s easy to see why a close friend says Kent Wellington seems to have “more hours in the day” than other people. There’s such a long list of things he’s involved with,” said Lauren Hannan Shafer, CEO of ArtWorks and formerly program director for Saturday Hoops. “If I ever feel overwhelmed, I always think about what Kent accomplishes in a day.” That list includes a nearly 30-year career with Graydon law firm, where he serves on the executive committee and as the Cincinnati market leader (his staff bio lists a slew of awards and recognitions). Equally high on the list are the “family ministries” where he and his children (Robby, 25, and Angeline, 22) practice their “give first” mentality: Saturday Hoops, a youth mentoring program he helps lead in Overthe-Rhine, and the Karen Wellington Foundation, which he established in honor of his late wife. On top of all that, he has run hundreds of races, including multiple triathlons. “Most people who know me in this town probably don’t know me for my day job,” he said – work that includes labor and employment law, litigation and advising start-ups. Growing up mostly in small towns – his family moved often – he noticed many community leaders were lawyers. He watched them work to save historic buildings, coach sports teams, give lay sermons at church. “I probably went to law school more for what I saw lawyers doing outside of work than what they were doing on a day-to-day basis,” he said.

An upbeat attitude After graduating from Kenyon College, where he played basketball and football, he studied law at Ohio State University, where he met Karen. He came to Graydon as a law clerk in 1990. 12

Jack Greiner, managing partner, describes Wellington as smart, hard-working, organized and a good mentor to younger lawyers. He recalls interviewing Wellington 30 years ago. “I remember being struck even back then with just what an upbeat, optimistic person he is,” Greiner said. That attitude – and, Wellington might add, his Christian faith – served him well when Karen was diagnosed with breast cancer at age 30. The disease never went into remission, and she died 10 years later. Their children never knew “Mom” without the disease. Yet, that’s not what the family remembers about Karen’s last decade. “She didn’t need sympathy,” Wellington said. “She didn’t want to be viewed as the ‘mom with cancer.’ ” Instead, she was the mom who brought pizza to school. She took up painting and started singing in a cover band. She baked cakes and played tennis and coached soccer. She secretly wrote dozens of letters for her family to read after she was gone. “She lived 10 years like each one was going to be her last,” Wellington said.

A way to give ‘gifts of fun’ When Karen died in July 2007, Wellington opted to forgo flowers at the funeral. He had a better use for those funds. “(Karen) once said to me that it would be cool if once we beat breast cancer, we could go on a vacation each summer and we could send someone else in the chemotherapy chairs next to her,” he said. Though that never happened during her lifetime, it did happen in her memory. Nearly 13 years later, the Karen Wellington Foundation has 11 chapters throughout the U.S. that have given away more than 850 “gifts of fun.” That includes 472 vacations

– made possible by donors who give a week or more at their vacation homes – and other fun activities, including spa days and concert tickets. “We basically put fun on the calendar of women and families living with breast cancer,” Wellington said. “If you get a vacation from us, it’s not because you’re dying. It’s because you are a woman who is still very much alive and you want someone to recognize the fun parts of you, the healthy parts of you.” About 30 percent of the trips awarded turn out to be last vacations, which Wellington hopes create lasting, positive memories for loved ones. Many of the other 70 percent of trip recipients come home thinking about the women in the chemotherapy chairs next to them, “much like Karen did,” Wellington said. Some go on to nominate other recipients or get involved more deeply with the foundation. (To be clear, anyone may nominate a recipient.) “What we’ve created is a very healthy cycle of receiving and giving,” he said. “We think that when you go on a vacation and you come back and you take the victim’s hat off and put the giver’s hat on, that is when you truly are living with breast cancer. So many of our recipients have embraced that.” Christy Runions is one of them. “When I came home after being given such an incredible gift … I knew I had to find a way to give back,” the 2016 vacation recipient said. She met Wellington (“He really believes life should be fun,” she said) and started participating in the foundation’s events, whether that meant working a beer booth or giving a speech. Today, she co-chairs the foundation’s Recipient Ambassador Board, engaging fellow recipients in sharing the foundation’s mission. “It fills you with joy to be able to give back,” she said.

Kent and a Saturday Hoops kid

Building hope with hoops Beyond his work as board chair for the foundation, Wellington finds joy in giving back with Saturday Hoops. He likens it to basketball camp with other activities such as art, reading, inspiring speakers and healthy meals. He’s been involved since the program’s inception 16 years ago, when it was just 10 or 20 kids and a handful of volunteers. Last year, 680 kids and more than 600 volunteers participated, Wellington said. The program, which operates out of the Over-theRhine Recreation Center, is now part of the Cincinnati Youth Collaborative (where Wellington was board chair). He and son Robby piloted a second location in Winton Terrace this year. A critical part of the day is that volunteers “pour into” the kids, telling them how great they are – at basketball, at art, as leaders. “We help these kids see the good in themselves,” he said. “We’re convinced if we show them that good week after week after week, they begin to see it themselves. They begin to feel it.” Kids are encouraged to be “cheerful givers, hard workers and overcomers.” They’re also encouraged to follow the “upward escalator” of faith and education rather than the “downward escalator” of guns and drugs. Wellington said volunteers can bring their own families and don’t need any special skills. “You really just show up,” he said. That, in itself, is critical.