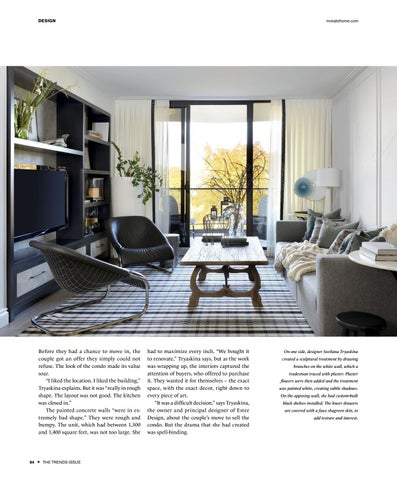 Before they had a chance to move in, the couple got an offer they simply could not refuse. The look of the condo made its value soar. “I liked the location. I liked the building,” Tryaskina explains. But it was “really in rough shape. The layout was not good. The kitchen was closed in.” The painted concrete walls “were in extremely bad shape.” They were rough and bumpy. The unit, which had between 1,300 and 1,400 square feet, was not too large. She

had to maximize every inch. “We bought it to renovate,” Tryaskina says, but as the work was wrapping up, the interiors captured the attention of buyers, who offered to purchase it. They wanted it for themselves – the exact space, with the exact decor, right down to every piece of art. “It was a difficult decision,” says Tryaskina, the owner and principal designer of Estee Design, about the couple’s move to sell the condo. But the drama that she had created was spell-binding.

On one side, designer Svetlana Tryaskina created a sculptural treatment by drawing branches on the white wall, which a tradesman traced with plaster. Plaster flowers were then added and the treatment was painted white, creating subtle shadows. On the opposing wall, she had custom-built black shelves installed. The lower drawers are covered with a faux shagreen skin, to add texture and interest. 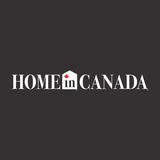