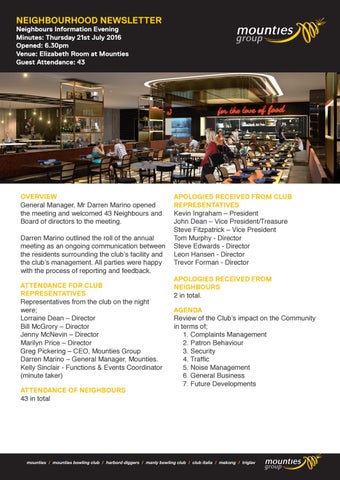 OVERVIEW General Manager, Mr Darren Marino opened the meeting and welcomed 43 Neighbours and Board of directors to the meeting. Darren Marino outlined the roll of the annual meeting as an ongoing communication between the residents surrounding the club’s facility and the club’s management. All parties were happy with the process of reporting and feedback. ATTENDANCE FOR CLUB REPRESENTATIVES Representatives from the club on the night were; Lorraine Dean – Director Bill McGrory – Director Jenny McNevin – Director Marilyn Price – Director Greg Pickering – CEO, Mounties Group Darren Marino – General Manager, Mounties. Kelly Sinclair - Functions & Events Coordinator (minute taker) ATTENDANCE OF NEIGHBOURS 43 in total

NEIGHBOURHOOD NEWSLETTER Neighbours Information Evening Minutes: Thursday 19th July 2018 Opened: 6.45pm Venue: Elizabeth Room at Mounties Guest Attendance: 39 MOUNTIES CURRENT MATTERS & FOLLOW UP 1. Complaints Management. Neighbours were informed that minimal complaints were received in the review period. One complaint was received regarding rubbish around Kewin Avenue gates. The club acted quickly and now has a regular clean-up service. An overall great year. No complaints or feedback received 2. Patron Behaviour. Neighbours were advised that anti-social behaviour have been reduced significantly due to the hard work of the board, management, staff and security. No complaints or feedback received 3. Security. - An additional 550 cameras have been implemented and are now operational 24 hours a day. - Introduction to the new security boundary car that is patrolling the area. Car is also equipped with GPS to see which streets it is traveling through on its route. - Introduction to the new security concierge roll to meet and assess clients at the Humphries road entrance and also assist with general club enquiries. No complaints or feedback received 4. Traffic. - The new Humphries road club entrance area is providing successful results with the practicality for arrivals and departures. - Strict management procedures and guidelines are in place to ensure the traffic during construction is minimal. No complaints or feedback received. 5. Noise Management. - Mounties have received positive feedback from neighbours regarding the levels of noise coming from the club throughout the year. Complaint received from Neighbour (Meadows Road) # There was one incident back 8 weeks, where hot rod cars had been revving and making quite a bit of loud noise, front car park exit around 12:30am in the

morning. Complained to the security guard on duty at the time and also rang the club to request that the incident be recorded however was not done so. Gates were opened up to allow them to leave. - Noted and Mounties will look into the matter further. No further complaints or feedback received 6. General Business Floor is opened up the all attendees for general discussion. Matter brought forward by Neighbour (Thorn Place) # Regarding the new terrace bar being built.

Neighbour is concerned and wants to know what sort of noise level and type of music will be played within this area once development is completed. Darren Marino â&#x20AC;&#x201C; General Manager advises that Mounties are doing away with the DJ entertainment on a weekly basis and that these types of events will become a one off event and will be placed into the showroom on these occasions. The new Terrace bar area has been designed to be an area for people to gather socially and enjoy something to eat whilst low key background music that compliments the food areas will be played throughout. Types of acts to be expected are solo artists with pianos and guitars to allow guests comfortable easy listening whilst at the club. 7. Future Developments - Darren Marino - General Manager presented neighbours with updates on present and future club development. Terrace bar construction will be completed at the end of August, this will also mean the closure of the coffee club and the opening of the new Mounties CafĂŠ being integrated with a bar. - Bau Troung will become air conditioned throughout this period ready for summer, in previous months it has become apparent that the heat is affecting guests whilst they eat. - Straight after Christmas will be the start of an interior design refurbishment of the main floor. This will be completed in small stages and will not affect the general running of the club.