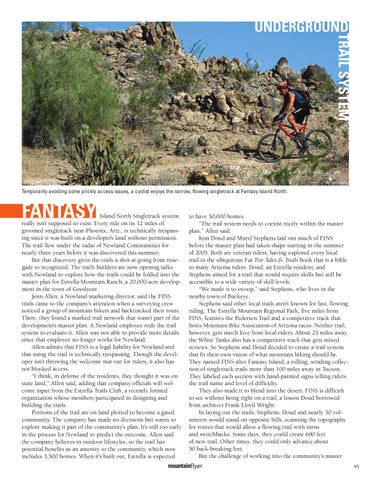 Island North Singletrack system really isn’t supposed to exist. Every ride on its 12 miles of groomed singletrack near Phoenix, Ariz., is technically trespassing since it was built on a developer’s land without permission. The trail flew under the radar of Newland Communities for nearly three years before it was discovered this summer. But that discovery gives the trails a shot at going from renegade to recognized. The trail’s builders are now opening talks with Newland to explore how the trails could be folded into the master plan for Estrella Mountain Ranch, a 20,000-acre development in the town of Goodyear. Jenn Allen, a Newland marketing director, said the FINS trails came to the company’s attention when a surveying crew noticed a group of mountain bikers and backtracked their route. There, they found a marked trail network that wasn’t part of the development’s master plan. A Newland employee rode the trail system to evaluate it. Allen was not able to provide more details since that employee no longer works for Newland. Allen admits that FINS is a legal liability for Newland and that using the trail is technically trespassing. Though the developer isn’t throwing the welcome mat out for riders, it also has not blocked access. “I think, in defense of the residents, they thought it was on state land,” Allen said, adding that company officials will welcome input from the Estrella Trails Club, a recently formed organization whose members participated in designing and building the trails. Portions of the trail are on land plotted to become a gated community. The company has made no decisions but wants to explore making it part of the community’s plan. It’s still too early in the process for Newland to predict the outcome. Allen said the company believes in outdoor lifestyles, so the trail has potential benefits as an amenity to the community, which now includes 3,500 homes. When it’s built out, Estrella is expected

to have 50,000 homes. “The trail system needs to coexist nicely within the master plan,” Allen said. Kim Doud and Murel Stephens laid out much of FINS before the master plan had taken shape starting in the summer of 2005. Both are veteran riders, having explored every local trail in the ubiquitous Fat Tire Tales & Trails book that is a bible to many Arizona riders. Doud, an Estrella resident, and Stephens aimed for a trail that would require skills but still be accessible to a wide variety of skill levels. “We made it to swoop,” said Stephens, who lives in the nearby town of Buckeye. Stephens said other local trails aren’t known for fast, flowing riding. The Estrella Mountain Regional Park, five miles from FINS, features the Pedersen Trail and a competitive track that hosts Mountain Bike Association of Arizona races. Neither trail, however, gets much love from local riders. About 25 miles away, the White Tanks also has a competitive track that gets mixed reviews. So Stephens and Doud decided to create a trail system that fit their own vision of what mountain biking should be. They named FINS after Fantasy Island, a rolling, winding collection of singletrack trails more than 100 miles away in Tucson. They labeled each section with hand-painted signs telling riders the trail name and level of difficulty. They also made it to blend into the desert. FINS is difficult to see without being right on a trail, a lesson Doud borrowed from architect Frank Lloyd Wright. In laying out the trails, Stephens, Doud and nearly 30 volunteers would stand on opposite hills, scanning the topography for routes that would allow a flowing trail with turns and switchbacks. Some days, they could create 600 feet of new trail. Other times, they could only advance about 50 back-breaking feet. But the challenge of working into the community’s master 95 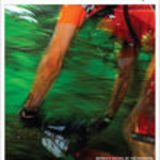