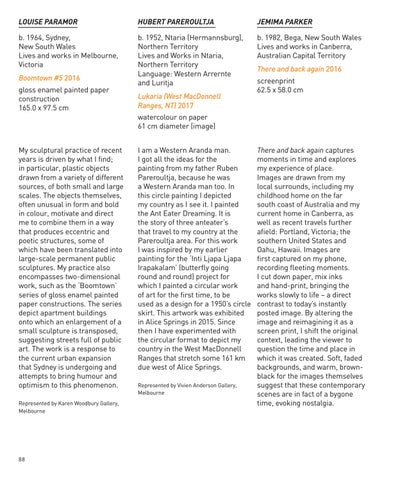 watercolour on paper 61 cm diameter (image) My sculptural practice of recent years is driven by what I find; in particular, plastic objects drawn from a variety of different sources, of both small and large scales. The objects themselves, often unusual in form and bold in colour, motivate and direct me to combine them in a way that produces eccentric and poetic structures, some of which have been translated into large-scale permanent public sculptures. My practice also encompasses two-dimensional work, such as the ‘Boomtown’ series of gloss enamel painted paper constructions. The series depict apartment buildings onto which an enlargement of a small sculpture is transposed, suggesting streets full of public art. The work is a response to the current urban expansion that Sydney is undergoing and attempts to bring humour and optimism to this phenomenon. Represented by Karen Woodbury Gallery, Melbourne

I am a Western Aranda man. I got all the ideas for the painting from my father Ruben Pareroultja, because he was a Western Aranda man too. In this circle painting I depicted my country as I see it. I painted the Ant Eater Dreaming. It is the story of three anteater’s that travel to my country at the Pareroultja area. For this work I was inspired by my earlier painting for the ‘Inti Ljapa Ljapa Irapakalam’ (butterfly going round and round) project for which I painted a circular work of art for the first time, to be used as a design for a 1950’s circle skirt. This artwork was exhibited in Alice Springs in 2015. Since then I have experimented with the circular format to depict my country in the West MacDonnell Ranges that stretch some 161 km due west of Alice Springs. Represented by Vivien Anderson Gallery, Melbourne

There and back again captures moments in time and explores my experience of place. Images are drawn from my local surrounds, including my childhood home on the far south coast of Australia and my current home in Canberra, as well as recent travels further afield: Portland, Victoria; the southern United States and Oahu, Hawaii. Images are first captured on my phone, recording fleeting moments. I cut down paper, mix inks and hand-print, bringing the works slowly to life – a direct contrast to today’s instantly posted image. By altering the image and reimagining it as a screen print, I shift the original context, leading the viewer to question the time and place in which it was created. Soft, faded backgrounds, and warm, brownblack for the images themselves suggest that these contemporary scenes are in fact of a bygone time, evoking nostalgia.

National Works on Paper is one of Australia’s most prestigious awards and acquisitive exhibitions. A biennial exhibition, its role is to support and promote contemporary Australian artists working on or with paper.