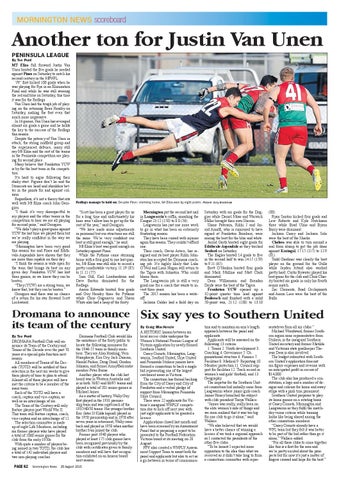 By Toe Punt MT Eliza full forward Justin Van Unen booted the five goals he needed against Pines on Saturday to notch his second century in the MPNFL. ‘JV’ first kicked 100 goals when he was playing for Rye in an Elimination Final and while he was still wearing the red and blue on Saturday, this time it was for the Redlegs. Van Unen had the tough job of playing on the returning Beau Hendry on Saturday, making the feat even that much more impressive. In 16 games, Van Unen has averaged almost six goals a game and he holds the key to the success of the Redlegs this season. Despite the potency of Van Unen in attack, the strong midfield group and the experienced defence, many still say Mt Eliza and the rest of the teams in the Peninsula competition are playing for second place. Many believe that Frankston YCW is by far the best team in the competition. It’s hard to argue following their shaky start. Figures don’t lie and the Stonecats are head and shoulders better in the points for and against column. Regardless, it’s not a theory that sits well with Mt Eliza coach John Georgiou. “I think it’s very disrespectful to my players and the other teams in the competition to hear we are all playing for second prize,” said Georgiou. “We didn’t play a great game against YCW the last time we played them but we’re really confident in the way we are playing. “Mornington have been very good this season too and Pines and Edithvale-Aspendale have shown that they are more than capable on their day. “I think the season is wide open for the team that brings its best on any given day. Frankston YCW has lost three games, so we know they can be beaten. “They (YCW) are a strong team, we know that, but they can be beaten.” Georgiou said there was no chance of a return for his star forward Scott Lockwood.

“Scott has been a great player for us for a long time and unfortunately his knee won’t allow him to get up for the rest of the year,” said Georgiou. “We have made some adjustments in personnel but our structures are still the same. We’re very confident our best is still good enough,” he said. Mt Eliza’s best was good enough on Saturday against Pines. While the Pythons came storming home with a four goal to one last quarter, Mt Eliza was still able to record a pretty comfortable victory, 11.19 (85) to 11.11 (77). Sam Gill, Karl Lombardozzi and Dave Barton dominated for the Redlegs. Aaron Edwards booted four goals and Guy Hendry three for Pythons while Chris Guganovic and Shaun White also had a heap of the footy.

Mornington put the second last nail in Langwarrin’s coffin, smashing the Kangas 23.12 (150) to 8.8 (56). Langwarrin has just one more week to go in what has been an extremely frustrating season. They have been cursed with injuries again this season. They couldn’t afford one. Their coach, Gavin Artico, has resigned and its best player Rikki Johnston has accepted the Dromana coaching job. It’s highly likely that Luke O’Neil and Liam Hogan will return to the Tigers with Johnston. Who could blame them. The Langwarrin job is still a very good one for a coach that wants to invest three years. The 2015 season has been a writeoff. Jackson Calder had a field day on

Saturday with six goals for the Doggies while Daniel Moss and Warwick Miller brought their own Sherrin. Shane Paterson, Rikki J and Jarrod Amalfi, who is rumoured to have signed at Frankston Bombers, were among the best for the blue and white. Jarrod Garth booted eight goals for Edithvale-Aspendale as they torched Seaford on Saturday. The Eagles booted 14 goals to five in the second half to win 24.15 (159) to 9.11 (65). Brett O’Hanlon booted four goals and Mark Mullins and Matt Clark dominated. Dean Williamson and Brendan Doyle were the best of the Tigers. Frankston YCW opened up a 32-point quarter time lead against Bonbeach and finished with a solid 50-point win, 21.12 (138) to 13.10

(88). Ryan Santon kicked four goals and Lew Roberts and Kyle Hutchison three while Brad Ulms and Byron Barry were dominant. Jackson Casey and Jackson Sole were the best of the Sharks. Chelsea was able to turn around a real form slump to get the job done against Karingal, 17.15 (117) to 12.9 (81). Todd Gardiner was clearly the best player on the ground for the Gulls while Jayden Attard also worked pretty hard. Curtis Bywater played his best game for the club and Chris Charity booted six goals in only his fourth senior match. Zac Clements, Brad Occhipinmti and Aaron Lees were the best of the Bulls.

Dromana to announce Six say yes to Southern United its team of the century By Toe Punt DROMANA Football Club will announce its Team of the Century and Teams of the Decade over the past 70 years at a special gala function next season. All members of Teams of the Decade (TOTD) will be notified of their selection in the next six weeks to give them plenty of time to plan to attend. Almost all of these players will have met the criteria to be a member of the main team. Each of the TOTD will have a coach, captain and vice-captain, as well as an interchange of six. The Team of the Century will only feature players post World War II. This team will feature captain, coach, vice-captain and an interchange of 12. The selection committee is made up of eight Life Members, including six former players who have played a total of 1060 senior games for the club from the early 1950s. With quite a number of players being named in two TOTD, the club has a total of 142 individual players and two non-playing coaches.

Dromana Football Club would like the assistance of the footy public to locate the following nominees for the 1946-55 team or family members. They are Alan Hosking, Vern Humphreys, Ken Coy, Jack Duncan, Harold Parkes, Doug Goad, Gordon Johnson, and former Army/Balcombe member Peter Burns. Another player who the club last heard was in Western Australia and is in both 76/85 and 86/95 teams and played a total of 201 senior games is Michael James. As a matter of history, Wally Guy first played in the 1931 premiership team and was capt/coach of the 1937/40/50 teams. His younger brother Eric (later St Kilda legend) played in the 1950 premiership and in 1958 after seven years in retirement, Wally came back and played in 1958 when another brother Ivan joined the club. Former post 1940 players who played at least 175 club games have been recognised previously by the club with certificates given to family members and will have that recognition exhibited on an honour board next season.

By Craig MacKenzie A HISTORIC liaison between six local soccer clubs underpins the Women’s National Premier League of Victoria application by newly formed Southern United. Casey Comets, Mornington, Langwarrin, Seaford United, Skye United and Peninsula Strikers juniors have formed a consortium to back a single bid representing one of the largest catchment areas in Victoria. The consortium has formal backing from the City of Casey and City of Frankston and a verbal pledge of support from Mornington Peninsula Shire Council. There were 22 applicants for Victoria’s inaugural WNPLV competition due to kick off next year with just eight applicants to be granted a licence. Applications closed last month and have been screened by an Assessment Panel that is preparing a report to be presented to the Football Federation Victoria board at its meeting on 28 August. FFV also created a WNPLV Assessment Support Team to assist both the panel and applicants but also to act as a go-between in terms of communica-

tion and to maintain an arm’s length approach between the panel and applicants. Applicants will be assessed on the following 13 criteria: 1. Teams 2. Youth development 3. Coaching 4. Governance 5. Organisational structure 6. Finance 7. Facilities 8. Medical 9. Reporting 10. Member protection 11. Council support for facilities 12. Track record in women’s and girls’ football, and 13. Geography. The impetus for the Southern United consortium bid initially came from Langwarrin where junior girls coach James Honey broached the subject with club president Tanya Wallace. “James was really, really keen on the elite women’s side of things and we soon realised that it was too big for one club to go it alone,” said Wallace. “We also believed that we would have a better chance of winning a licence if we took a regional approach so I contacted the presidents of the other five clubs. “To be honest I expected more opposition to the idea than what we received so it didn’t take long to form a consortium committee with repre-

sentatives from all six clubs.” Michael Woodward, former Southern region zone representative from Strikers, is the inaugural Southern United secretary and former Matilda and Victorian state goalkeeper Theresa Deas is also involved. The budget submitted with Southern United’s application forecast six-figure expenses and revenue with an anticipated profit in excess of $14,000. The club also has produced a constitution, a logo and a number of designs and colours for home and away strips with a pink trim prominent. Southern United proposes to play its home games on a rotating basis at Casey Comets, Mornington and Langwarrin as they fulfil the matchday venue criteria while training looks like being shared among the other consortium members. “Casey Comets already have a WPL team but they felt it was better to be part of the bid rather than go it alone,” Wallace added. “For all these clubs to come together like this is a first for the area and we’re pretty excited about the prospects but for now it’s just a matter of fingers crossed and hope for the best.”