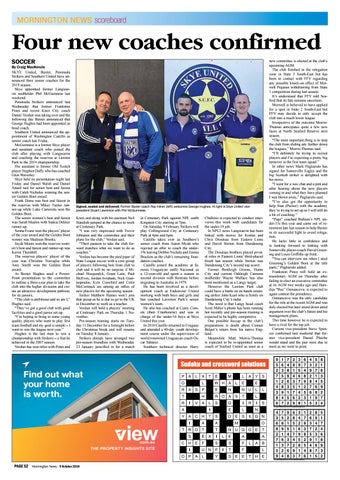 By Craig MacKenzie SKYE United, Baxter, Peninsula Strikers and Southern United have announced their senior coaches for the 2019 season. Skye appointed former Langwarrin midfielder Phil McGuinness last weekend. Peninsula Strikers announced last Wednesday that former Frankston Pines and recent Knox City coach Danny Verdun was taking over and the following day Baxter announced that George Hughes had been appointed as head coach. Southern United announced the appointment of Washington Castillo as senior coach last Friday. McGuinness is a former Skye player and assistant coach who joined the club after playing with Langwarrin and coaching the reserves at Lawton Park to the 2014 championship. His assistant is former Old Scotch player Stephen Duffy who has coached Glen Waverley. Skye held its presentation night last Friday and Daniel Walsh and Daniel Attard tied for senior best and fairest with Caleb Nicholes winning the senior Golden Boot award. Frank Dimu was best and fairest in the reserves with Mikey Turner runner-up while Luke Camerota won the Golden Boot. The senior women’s best and fairest was Sarah Maslen with Saskia Dekker runner-up. Senna Evans won the players’ player of the year award and the Golden Boot winner was Madison Brooks. Jayde Moore won the reserves women’s best and fairest and runner-up was Kerrie Thornhill. The reserves players’ player of the year was Christine Travaglia while Amy Smith won the Golden Boot award. At Baxter Hughes used a PowerPoint presentation to the committee to outline a three-year plan to take the club into the higher divisions and create an attractive development pathway for its juniors. “The club is ambitious and so am I,” Hughes said. “They’ve got a good club with good facilities and a good junior set-up. “I’m hoping to bring in some young quality players who want to play first team football and my goal is simple – I want to win the league next year.” Hughes is the last man to win a championship with Strikers – a feat he achieved in the 2007 season. Verdun has won titles with Pines and

Knox and along with his assistant Neil Standish jumped at the chance to work at Centenary Park. “I was very impressed with Trevor Johnston and the committee and their plans for the club,” Verdun said. “Their passion to take the club forward matches what we want to do as coaches.” Verdun has become the pied piper of State League soccer with a core group of players following him from club to club and it will be no surprise if Michael Hoogendyk, Grant Lane, Paul McEvoy, Jordan Avraham, Nick Giannopoulos, Kyle Crawford and Colin McCormack are among an influx of new players for the upcoming season. Striker Matthew Hames won’t join that group as he is due to go to the UK in December to work as a teacher. Verdun will hold a players’ meeting at Centenary Park on Thursday 1 November. Pre-season training starts on Tuesday 11 December for a fortnight before the Christmas break and will resume on Tuesday 8 January. Strikers already have arranged two pre-season friendlies with Wednesday 23 January pencilled in for a match

at Centenary Park against NPL outfit Kingston City starting at 7pm. On Saturday 9 February Strikers will play Collingwood City at Centenary Park at 4pm and 6pm. Castillo takes over as Southern’s senior coach from Aaron Myatt who rejected an offer to coach the under19s leaving Debbie Nichols and Emma Bracken as the club’s remaining foundation coaches. Castillo joined the academy at famous Uruguayan outfit Nacional as a 12-year-old and spent a season in second division with Rentista before migrating to Australia in 1979. He has been involved as a development coach at Endeavour United working with both boys and girls and has coached Laverton Park’s senior women’s team. He also has coached at Casey Comets (then Cranbourne) and was in charge of the under-16 boys at Skye United this year. In 2010 Castillo returned to Uruguay and attended a 40-day youth development course under the supervision of world renowned Uruguayan coach Óscar Tabárez. Southern technical director Harry

Chalkitis is expected to conduct interviews this week with candidates for the under-19 job. In NPL2 news Langwarrin has been linked with moves for Kostas and Chris Droutsas from Eastern Lions and David Stirton from Dandenong City. The Droutsas brothers played pivotal roles in Eastern Lions’ third-placed finish last season while Stirton was Dandenong City’s second top scorer. Former Bentleigh Greens, Hume City and current Oakleigh Cannons midfielder Wayne Wallace has also been mentioned as a Langy target. However the Lawton Park club could have a battle on its hands retaining striker John Kuol who is firmly on Dandenong City’s radar. The word is that Langy head coach Scott Miller’s phone has been running hot recently and pre-season training is expected to be highly competitive. One possible hiccup in the club’s preparations is doubt about Connor Belger’s return from his native England. Meanwhile Matt Morris-Thomas is expected to be re-appointed senior coach of Seaford United as soon as a

new committee is elected at the club’s upcoming AGM. The club finished in the relegation zone in State 3 South-East but has been in contact with FFV regarding any possible knock-on effect of Morwell Pegasus withdrawing from State 1 competition during last season. It’s understood that FFV told Seaford that its fate remains uncertain. Morwell is believed to have applied for a spot in State 2 South-East but FFV may decide to only accept the club into a much lower league. Irrespective of the outcome MorrisThomas anticipates quite a few new faces at North Seaford Reserve next season. “The most important thing is to stop the club from sliding any further down the leagues,” Morris-Thomas said. “I’ll definitely be trying to recruit players and I’m expecting a pretty big turnover in the first team squad.” In other news Mark Pagliarulo has signed for Somerville Eagles and the big Scottish striker is delighted with his move. “I went for a wee chat and a pint and after hearing about the new players coming in and what they have planned I was blown away,” Pagliarulo said. “I’ve also got the opportunity to help Stan (Packer) with the academy they’re trying to set up so I will still do a bit of coaching.” “Pags” coached Bulleen’s NPL under-15s this year and came out of retirement late last season to help Baxter in its successful fight to avoid relegation. He lacks little in confidence and is looking forward to linking with Somerville player-coach David Greening and Louis Griffiths up front. “You can interview me when I steal Greening’s Golden Boot at the title party,” Pagliarulo added. Frankston Pines will hold an extraordinary AGM on Thursday after failing to elect an executive committee at its AGM two weeks ago and Hamdija “Boz” Osmancevic is expected to again contest the presidency. Osmancevic was the only candidate for the role at the recent AGM and was duly elected but later stood down amid argument over the club’s future and his management plans. This time however he is expected to have a rival for the top job. Current vice-president Steve Spencer confirmed last weekend that former vice-president Daniel Plaiche would stand and the pair were due to meet as we went to print.