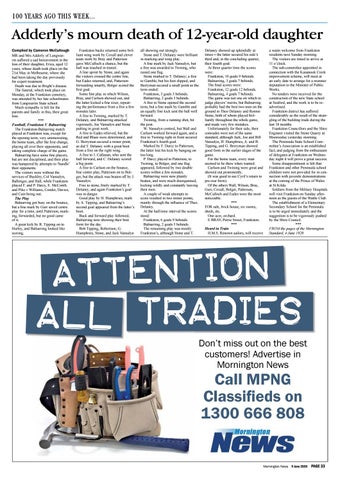 Adderly’s mourn death of 12-year-old daughter Compiled by Cameron McCullough MR and Mrs Adderly of Langwarrin suffered a sad bereavement in the loss of their daughter, Erica, aged 12 years, whose death took place on the 21st May in Melbourne, where she had been taking the day previously for expert treatment. Death was due to Bright’s disease. The funeral, which took place on Monday, at the Frankston cemetery, was attended by her late schoolmates from Langwarrin State school. Much sympathy is felt for the parents and family in this, their great loss. *** Football. Frankston V. Balnarring The Frankston-Balnarring match played at Frankston was, except for the opening term, very uninteresting, the home team, after the first change, playing all over their opponents, and taking complete charge of the game. Balnarring have some fine players, but are not disciplined, and their play was hampered by attempts to ‘handle’ their opponents. The visitors were without the services of Buckley, Col Vansulyn, Ballenger, and Hall, while Frankston played F. and P. Darcy, E. McComb, and Pike – Williams, Conder, Davies, and Cain being out. The Play Balnarring got busy on the bounce, but a fine mark by Gurr saved centre play for a time, until Patterson, marking, forwarded, but no good came of it. A great kick by R. Tipping on to Hurley, and Balnarring looked like scoring.

Frankston backs returned some brilliant wing work by Coxall and clever team work by Bray and Patterson gave McCulloch a chance, but the ball was touched in transit. A line sprint by Stone, and again the visitors crossed the centre line, but Eades returned, and, Patterson forwarding smartly, Bolger scored the first goal. Some fine play in which Wilson, Bray, and Carlson showed out, and the latter kicked a fine sixer, repeating the performance from a free a few minutes later. A free to Twining, marked by T. Delaney, and Balnarring attacked vigorously, Joe Vansulyn and Stone putting in great work. A free to Eades relieved, but the Red and Blues were determined, and G. Berryman secured a minor point, as did T. Delaney with a great boot from a free on the right wing. A free to J. Callanan, who sent the ball forward, and C. Delaney scored a big point. A free to Carlson on the bounce, fine centre play, Patterson on to Bolger, but the attack was beaten off by J. Vausulyn. Free to stone, finely marked by T. Delaney, and again Frankston’s goal was in danger. Good play by H. Humphries, mark by A. Tipping, and Balnarring’s second goal appeared from the latter’s boot. Back and forward play followed, Balnarring now showing their best form for the day. Bob Tipping, Robertson, G. Humphries, Stone, and Jack Vansulyn

all showing out strongly. Stone and T. Delaney were brilliant in marking and wing play. A fine mark by Jack Vansulyn, but a free was awarded to Twining, who raised one flag. Stone marked to T. Delaney; a free to Gamble, but his foot slipped, and Berryman secured a small point as the term ended: Frankston, 3 goals 3 behinds. Balnarring, 2 goals 3 behinds. A free to Stone opened the second term, but a fine mark by Gamble and an equally fine kick sent the ball well forward. Twining, from a running shot, hit the post. W. Vansulyn centred, but Wall and Carlson worked forward again, and a free to Twining right in front secured Frankston’s fourth goal. Marked by F. Darcy to Patterson, the latter lost his kick by hanging on too long. P. Darcy played to Patterson, to Twining, to Bolger, and one flag appeared, followed by two double scores within a few minutes. Balnarring were now plainly beaten, and were much disorganised, kicking wildly and constantly leaving their men. A couple of weak attempts to score resulted in two minor points, mainly through the influence of Theo. Delaney. At the half-time interval the scores stood: Frankston, 6 goals 9 behinds. Balnarring, 2 goals 5 behinds. The remaining play was mostly Frankston’s, although Stone and T.

Delaney showed up splendidly at times – the latter secured his side’s third and, in the concluding quarter, their fourth goal. At three quarter time the scores were: Frankston, 10 goals 9 behinds. Balnarring, 3 goals 7 behinds. The final scores were: Frankston, 12 goals 12 behinds. Balnarring, 4 goals 7 behinds. The game was not one on which to judge players’ merits, but Balnarring probably had the best two men on the ground in Theo Delaney and Ronnie Stone, both of whom played brilliantly throughout the whole game, and made very few mistakes. Unfortunately for their side, their comrades were not of the same standard, although Jack, Joe and Bill Vansulyn, H. Humphries, A. and B. Tipping, and G. Berryman showed good form in the earlier stages of the game. For the home team, every man seemed to be there when wanted. Carlson and Twining were great and showed out prominently. (It was good to see Cyril’s return to pre-war form). Of the others Wall, Wilson, Bray, Gurr, Coxall, Bolger, Patterson, McCulloch and Eades were the most noticeable. *** FOR sale, brick house, six rooms, sheds, etc. One acre, orchard. E BRAY, Petrie Street, Frankston. *** Heard in Train H.M.S. Renown sailors, will receive

a warm welcome from Frankston residents next Sunday morning. The visitors are timed to arrive at 11 o’clock. The sub-committee appointed in connection with the Kananook Creek improvement scheme, will meet at an early date to arrange for a monster deputation to the Minister of Public Works. No tenders were received for the construction of the new State school at Seaford, and the work is to be readvertised. Frankston district has suffered considerably as the result of the strangling of the building trade during the last 18 months. Frankston Councillors and the Shire Engineer visited the Stone Quarry at Moorooduc yesterday morning. The Peninsula State School Committee’s Association is an established fact, and judging from the enthusiasm of delegates at Frankston on Wednesday night it will prove a great success. Some disappointment is felt that Frankston and other Peninsula school children were not provided for in connection with juvenile demonstrations at the coming of the Prince of Wales at St Kilda. Soldiers from the Military Hospitals will visit Frankston on Sunday afternoon as the guests of the Wattle Club. The establishment of a Elementary Secondary School for the Peninsula is to be urged immediately and the suggestion is to be vigorously pushed by the Shire Council. *** FROM the pages of the Mornington Standard, 4 June 1920