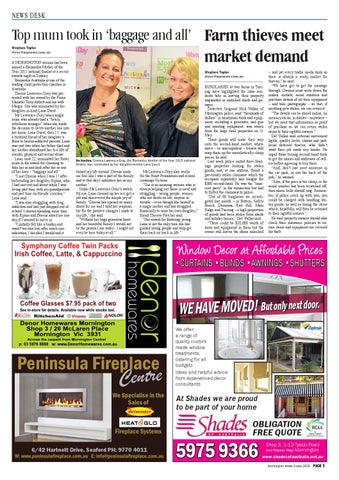 Top mum took in ‘baggage and all’ Farm thieves meet

Stephen Taylor steve@mpnews.com.au A MORNINGTON woman has been named a Barnardos Mother of the Year 2015 national finalist at a recent awards night in Sydney. Barnardos Australia is one of the leading child protection charities in Australia. Dreena Lawrence-Gray was presented with her award by the Prime Minister Tony Abbott and his wife Margie. She was nominated by her daughter-in-kind Lana Guest. Ms Lawrence-Gray was a single mum who already had a “lively, rebellious teenager” when she made the decision to invite another one into her home. Lana Guest, then 17, was a troubled friend of her daughter’s. Born to heroin-addicted parents, Lana was just two when her father died and her mother abandoned her to a life of mental, physical and sexual abuse. Lana, now 22, nominated her foster mum in the award for choosing to take her in and look after her as one of her own – “baggage and all”. “I met Dreena when I was 17 after befriending her daughter, Rijana, who I had met out and about while I was living part time with my grandparents and part time on friends’ couches,” Lana said. “I was also struggling with drug addiction and had just dropped out of school. I started spending more time with Rijana and Dreena asked me one day if I wanted to move in. “I initially felt like a burden and wasn&#39;t too sure but, after much consideration, I decided I would and it

No burden: Dreena Lawrence-Gray, the Barnardos Mother of the Year 2015 national finalist, was nominated by her daughter-in-kind Lana Guest.

turned my life around. Dreena made me feel like I was a part of the family and to this day I introduce her as my mother.” Under Ms Lawrence-Gray’s watchful eye, Lana cleaned up her act, got a job and discovered the simple joy of family. “Dreena has opened so many doors for me and I hold her responsible for the positive changes I made to my life,” she said. “Without her huge generous heart and her beautiful family I would not be the person I am today - I might not even be here today at all.”

Ms Lawrence-Gray also works for the Heart Foundation and school crossings Victoria. “She is an amazing woman who is always helping out those in need and struggling – young people, women who are down on life, anyone in trouble – even though she herself is a single mother and has struggled financially to raise her own daughter,” friend Therese Fletcher said. “Her award for fostering young Lana is not the only time she has guided young people and help get them back on track in life.”

BURGLARIES at two farms in Tuerong have highlighted the risks residents take in leaving their property unguarded in unlocked sheds and garages. Detective Sergeant Nick Vallas, of Mornington police, said “thousands of dollars” in handyman tools and equipment, including a generator, nail gun and sporting equipment, was stolen from the large rural properties on 21 May. These goods will make their way onto the second-hand market, where naïve – or unscrupulous – buyers will snap them up for unrealistically cheap prices, he said. Last week police raided three Hastings properties looking for stolen goods, and, at one address, found a previously stolen chainsaw which the occupant reportedly had bought for $300 second-hand. He was the “innocent party” in the transaction but had to forfeit the chainsaw to police. “Out of 80 burglaries we investigated last month – in Bittern, Safety Beach, Dromana, Red Hill, Main Ridge and Tuerong – a high proportion of goods had been stolen from sheds and holiday homes,” Det. Vallas said. “There could be $20,000 worth of tools and equipment in them but the owner still leaves the doors unlocked

– and yet every tradie needs tools so there is always a ready market for thieves,” he said. “We have got to get the message through. Owners must write down the makes, models, serial numbers and purchase details of all their equipment – and take photographs – so that, if anything gets stolen, we can return it. “The details can be stored online, on memory sticks, in diaries – anywhere – but we need that information as proof of purchase so we can return stolen items to their rightful owners.” Det Vallas said external movement lights, quality locks, chains and padlocks deterred thieves, who didn’t want their job made any harder. He urged those buying second-hand tools to get the names and addresses of sellers before agreeing to buy them. “And, don’t just meet someone in the car park, or out the back of the pub,” he warned. “Also, if the price is too cheap, or the serial number has been scratched off, then alarm bells should ring. Remember, if police catch up with you, you could be charged with handling stolen goods, as well as losing the items which, hopefully, will then be returned to their rightful owners.” He said property owners should also check their insurance policies to ensure items and equipment are covered for theft.

WE HAVE MOVED! But only next door.

We Specialise in the 6DOHV RI