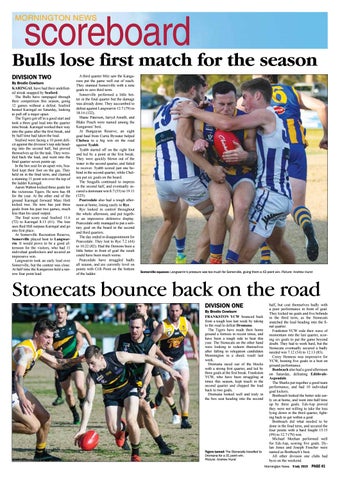 By Brodie Cowburn KARINGAL have had their undefeated streak snapped by Seaford. The Bulls have rampaged through their competition this season, going 12 games without a defeat. Seaford hosted Karingal on Saturday, looking to pull off a major upset. The Tigers got off to a good start and took a three goal lead into the quarter time break. Karingal worked their way into the game after the first break, and by half time had taken the lead. Seaford were facing a 10 point deficit against the division’s top side heading into the second half, but proved themselves up for the task. They wrestled back the lead, and went into the final quarter seven points up. In the box seat for an upset win, Seaford kept their foot on the gas. They held on in the final term, and claimed a stunning 11 point win over the top of the ladder Karingal. Aaron Walton kicked three goals for the victorious Tigers. He now has 48 for the year. At the other end of the ground Karingal forward Marc Holt kicked two. He now has just three goals from his past two games, much less than his usual output. The final score read Seaford 11.6 (72) to Karingal 8.13 (61). The loss sees Red Hill surpass Karingal and go into first place. At Somerville Recreation Reserve, Somerville played host to Langwarrin. It would prove to be a good afternoon for the visitors, who had 11 individual goalkickers and secured an impressive win. Langwarrin took an early lead over Somerville, but the contest was close. At half time the Kangaroos held a narrow four point lead.

A third quarter blitz saw the Kangaroos put the game well out of reach. They stunned Somerville with a nine goals to zero third term. Somerville performed a little better in the final quarter but the damage was already done. They succumbed to defeat against Langwarrin 12.7 (79) to 18.14 (122). Shane Paterson, Jarryd Amalfi, and Blake Peach were named among the Kangaroos’ best. At Bunguyan Reserve, an eight goal haul from Curtis Bywater helped Chelsea to a big win on the road against Tyabb. Tyabb started off on the right foot and led by a point at the first break. They were quickly blown out of the water in the second quarter, and failed to recover. Tyabb scored just one behind in the second quarter, while Chelsea put six goals on the board. The Seagulls continued to impress in the second half, and eventually secured a dominant win 8.7 (55) to 19.11 (125). Pearcedale also had a tough afternoon at home, losing easily to Rye. Rye looked in control throughout the whole afternoon, and put together an impressive defensive display. Pearcedale only managed to put a solitary goal on the board in the second and third quarters. The day ended in disappointment for Pearcedale. They lost to Rye 7.2 (44) to 10.22 (82). Had the Demons been a little better in front of goal the result could have been much worse. Pearcedale have struggled badly all season, and are currently level on points with Crib Point on the bottom of the ladder.

Somerville squeeze: Langwarrin’s pressure was too much for Somerville, giving them a 43 point win. Picture: Andrew Hurst

Stonecats bounce back on the road DIVISION ONE

By Brodie Cowburn FRANKSTON YCW bounced back from a tough loss last week by taking to the road to defeat Dromana. The Tigers have made their home ground a fortress in recent times, and have been a tough side to beat this year. The Stonecats on the other hand were looking to redeem themselves after falling to relegation candidates Moninngton in a shock result last week. Dromana raced out of the blocks with a strong first quarter, and led by three goals at the first break. Frankston YCW, who have been struggling at times this season, kept touch in the second quarter and chipped the lead back to two goals. Dromana looked well and truly in the box seat heading into the second

half, but cost themselves badly with a poor performance in front of goal. They kicked no goals and five behinds in the third term, as the Stonecats snatched the lead heading into the final quarter. Frankston YCW rode their wave of momentum into the last quarter, scoring six goals to put the game beyond doubt. They had to work hard, but the Stonecats eventually secured a badly needed win 7.12 (54) to 12.13 (85). Corey Henness was impressive for YCW, booting five goals in a best on ground performance. Bonbeach also had a good afternoon on Saturday, defeating EdithvaleAspendale. The Sharks put together a good team performance, and had 10 individual goal kickers. Bonbeach looked the better side early on at home, and went into half time up by three goals. Edi-Asp proved they were not willing to take the loss lying down in the third quarter, fighting back to get within a goal. Bonbeach did what needed to be done in the final term, and secured the four points with a hard fought 15.15 (99) to 12.7 (79) win. Michael Meehan performed well for Edi-Asp, scoring five goals. Dylan Jones and Joseph Fisscher were named as Bonbeach’s best. All other division one clubs had byes on the weekend. Mornington News