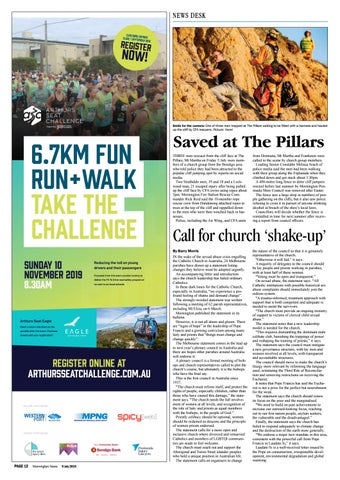 Smile for the camera: One of three men trapped at The Pillars waiting to be fitted with a harness and hauled up the cliff by CFA rescuers. Picture: Yanni

Arthurs Seat Eagle Catch a return ride down on the gondola after the event. Purchase tickets with your registration!

Saved at The Pillars THREE men rescued from the cliff face at The Pillars, Mt Martha on Friday 5 July were members of a church group from the Bendigo area who told police they had been attracted to the popular cliff jumping spot by reports on social media. Two Strathdale men, 19 and 18 and a Lockwood man, 21 escaped injury after being pulled up the cliff face by CFA crews using ropes about 5pm. Mornington Fire Station Rescue Commander Rick Reid said the 10-member rope rescue crew from Dandenong attached ropes to trees at the top of the cliff and rappelled down to the men who were then winched back in harnesses. Police, including the Air Wing, and CFA units

from Dromana, Mt Martha and Frankston were called to the scene by church group members. Leading Senior Constable Melissa Seach of police media said the men had been walking with their group along the Esplanade when they climbed down and got stuck about 3.30pm. A 400-metre long fence to deter cliff jumpers erected before last summer by Mornington Peninsula Shire Council was removed after Easter. The fence saw a large drop in numbers of people gathering on the cliffs, but it also saw police refusing to cross it in pursuit of anyone drinking alcohol in breach of the shire’s local laws. Councillors will decide whether the fence is reinstalled in time for next summer after receiving a report from council officers.

Call for church ‘shake-up’ By Barry Morris IN the wake of the sexual abuse crisis engulfing the Catholic Church in Australia, 24 Melbourne parishes have drawn up a statement listing changes they believe must be adopted urgently. An accompanying letter and introduction says the church leadership has failed ordinary Catholics. In these dark times for the Catholic Church, especially in Australia, “we experience a profound feeling of shame and demand change”. The strongly-worded statement was written following a meeting of 62 parish representatives, including Mt Eliza, on 6 March. Mornington published the statement in its bulletin. However, it is not all doom and gloom. There are “signs of hope” in the leadership of Pope Francis and a growing conviction among many laity and priests that “things must change and change quickly”. The Melbourne statement comes in the lead up to next year’s plenary council in Australia and there are hopes other parishes around Australia will endorse it. A plenary council is a formal meeting of bishops and church representatives called to plot the church’s course, but ultimately it is the bishops who have the final say. This is the first council in Australia since 1937. “The church must reform itself, and protect the rights of people, especially children, rather than those who have caused this damage,” the statement says. “The church needs the full involvement of women at all levels, and recognition of the role of laity and priests as equal members with the bishops, in the people of God.” Priestly celibacy should be optional, women should be ordained as deacons and the principle of women priests endorsed. The statement calls for a more open and inclusive church where divorced and remarried Catholics and members of LGBTQI communities are made to feel welcome. The church must reach out and support the Aboriginal and Torres Strait islander peoples who hold a unique position in Australian life. The statement calls on organisers to change

the nature of the council so that it is genuinely representative of the church. “Otherwise it will fail,” it says. A majority of delegates to the council should be lay people and priests working in parishes, with at least half of these women. “Voting must be open and transparent.” On sexual abuse, the statement says: “All Catholic institutions with possible historical sex abuse complaints should immediately join the redress system. “A trauma-informed, treatment approach with support that is both competent and adequate is needed to assist the survivors. “The church must provide an ongoing ministry of support to victims of clerical child sexual abuse.” The statement notes that a new leadership model is needed for the church. “This requires dismantling the dominant male celibate club, banishing the trappings of power and reshaping the training of priests,” it says. The statement says the council must instigate a new governance structure, with lay men and women involved at all levels, with transparent and accountable structures. The council should move to make the church’s liturgy more relevant by reforming the language used, reinstating the Third Rite of Reconciliation and removing restrictions on receiving the Eucharist. It notes that Pope Francis has said the Eucharist is not a prize for the perfect but nourishment for the weak. The statement says the church should renew its focus on the poor and the marginalised. “We need to build on past achievements to increase our outward-looking focus, reaching out to our first nation people, asylum seekers, the vulnerable and the disadvantaged.” Finally, the statement says the church has failed to respond adequately to climate change and the destruction of the earth more generally. “We endorse a major new mandate in this area, consistent with the powerful call from Pope Francis in Laudato Si,” it says. Laudato Si is a well-received letter issued by the Pope on consumerism, irresponsible development, environmental degradation and global warming.