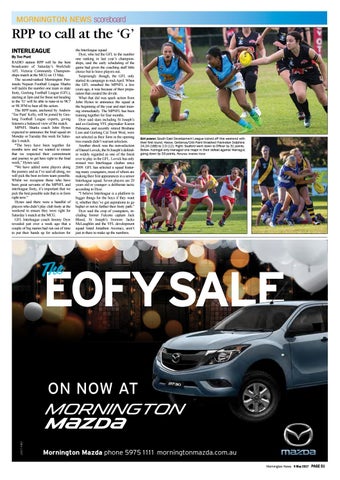 RPP to call at the ‘G’ INTERLEAGUE

By Toe Punt RADIO station RPP will be the host broadcaster of Saturday’s WorkSafe AFL Victoria Community Championships match at the MCG on 13 May. The second-ranked Mornington Peninsula Nepean Football League Sharks will tackle the number one team in state footy, Geelong Football League (GFL), starting at 3pm and for those not heading to the ‘G’ will be able to tune-in to 98.7 or 98.3FM to hear all the action. The RPP team, anchored by Andrew ‘Toe Punt’ Kelly, will be joined by Geelong Football League experts, giving listeners a balanced view of the match. MPNFL Sharks coach John Hynes expected to announce the final squad on Monday or Tuesday this week for Saturday’s match. “The boys have been together for months now and we wanted to ensure that we respected their commitment and journey to get here right to the final week,” Hynes said. “We have added some players along the journey and as I’ve said all along, we will pick the best in-form team possible. Whilst we recognise those who have been great servants of the MPNFL and interleague footy, it’s important that we pick the best possible side that is in form right now.” Hynes said there were a handful of players who didn’t play club footy at the weekend to ensure they were right for Saturday’s match at the MCG. GFL Interleague coach Jeremy Dyer revealed just over a week ago that a couple of big names had run out of time to put their hands up for selection for

the Interleague squad. Dyer, who led the GFL to the number one ranking in last year’s championships, said the early scheduling of the game had given the coaching staff little choice but to leave players out. Surprisingly though, the GFL only started its campaign in mid-April. When the GFL smashed the MPNFL a few years ago, it was because of their preparation that created the divide. What that did was spark action from John Hynes to announce the squad at the beginning of the year and start training immediately. The MPNFL has been training together for four months. Dyer said stars including St Joseph’s and ex-Geelong VFL playmaker Kieren Paliouras, and recently retired Brisbane Lion and Geelong Cat Trent West, were not selected as their form in the opening two rounds didn’t warrant selection. Another shock was the non-selection of Daniel Lovick, the St Joseph’s defender widely regarded as one of the finest ever to play in the GFL. Lovick has only missed two Interleague clashes since 2009. GFL has selected a squad featuring many youngsters, most of whom are making their first appearances in a senior Interleague squad. Seven players are 20 years old or younger- a deliberate tactic according to Dyer. “I believe Interleague is a platform to bigger things for the boys if they want it, whether they’ve got aspirations to go higher or not to further their footy path.” Dyer said the crop of youngsters, including former Falcons captain Jack Blood, St Joseph’s livewire Jacko McLaughlin and the VFL development squad listed Jonathon Arcoraci, aren’t just in there to make up the numbers.

Girl power: South East Development League kicked off this weekend with their first round. Above, Cerberus/Crib Point thrashed Frankston Dolphins 24.24 (168) to 2.0 (12). Right: Seaford went down to Officer by 31 points. Below: Karingal only managed one major in their defeat against Warragul, going down by 33 points. Pictures: Andrew Hurst