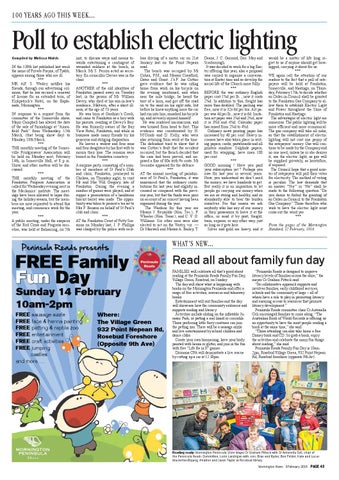 Poll to establish electric lighting Compiled by Melissa Walsh IN the 139th list published last week the name of Private Frayne, of Tyabb, appears among those who are ill. *** MR Alf. S. Wesley notifies his friends, through our advertising columns, that he has secured a renewal of license for an extended term, of Kirkpatrick’s Hotel, on the Esplanade, Mornington. *** IN response to a request from the committee of the Somerville show, Major Campbell has altered the date of the sale of furnishings at “Amesfield Park” from Wednesday, 15th March, (that being show day) to Monday, 18th March. *** THE monthly meeting of the Somerville Fruitgrowers’ Association will be held on Monday next, February 14th, in Somerville Hall, at 8 p m. Show, and other matters will be discussed. *** THE monthly meeting of the Frankston Progress Association is called for Wednesday evening next in the Mechanics’ institute. The meetings have been allowed to lapse during the holiday season, but the members are now requested to attend this meeting, and commence work for the year. *** A public meeting, under the auspices of the Red Cross and Progress societies, was held at Balnarring, on 5th

inst, to discuss ways and means towards entertaining a contingent of wounded soldiers at the beach, in March. Mr S. Perron acted as secretary. Ex-councillor Davies was in the chair. *** ANOTHER of the old identities of Frankston passed away on Tuesday last, in the person of Mr. William Davey, who died at his son-in-law’s residence, Malvern, after a short illness, at the age of 73 years. He was born at Gardiner’s Creek, and came to Frankston as a boy with his parents, residing at Davey’s Bay. He was formerly owner of the Bay View Hotel, Frankston, and while in business made many friends by his generous and obliging disposition. He leaves a widow and four sons and four daughters by his first wife to mourn their loss. The remains were buried in the Frankston cemetery. *** A surprise party, consisting of a number of members of St Paul’s Club and choir, Frankston, journeyed to Chelsea, on Thursday night, to visit Mr and Mrs Will Gregory, late of Frankston. During the evening a number of games were played, and at supper a presentation of a handsome biscuit barrel was made. The opportunity was taken to present a tea set to Mrs F. Benson on behalf of St Paul’s club and choir. *** AT the Frankston Court of Petty Sessions on Monday last, J. F. Phillips was charged by the police with reck-

less driving of a motor car on 21st January last on the Point Nepean road. The bench was occupied by Mr Cohen, P.M., and Messrs Crawford, Oates and Grant. J’s.P. Jas Cottier gave evidence that he was riding home from work on his bicycle on the evening mentioned, and when near the mile bridge, he heard the toot of a horn, and got off the road on to the sand on his right side, but before he knew anything more the car had run into him; smashed his bicycle up, and severely injured himself. He was rendered unconscious, and was bruised from head to foot. This evidence was corroborated by H. M’Comb and D. Kelly, who were also returning from work at the time. The defendant tried to show that it was Cottier’s fault that the accident occurred, but the Bench decided that the case had been proved, and imposed a fine of 60s with 9s costs. Mr Secombe appeared for the defence. *** AT the annual meeting of parishioners of St Paul’s, Frankston, it was announced that the ordinary contributions for last year had slightly increased as compared with the previous year, but that the funds were poor on account of no concert having been organised during the year. The Wardens for this year are Messrs J. Reynolds (Hon. Sec.); P. Wheeler (Hon. Treas.); and C. V. G. Williams. Six other men were also elected to act on the Vestry, viz :— Dr Maxwell and Messrs A. Bailey, T.

Deane, J. C. Garrood, Geo. May and Scarborough. It was decided to work for a big Easter offering this year, also a proposal was carried to organise a conversation at Easter time and so develop the social life of the Church more fully. *** BEFORE the war ordinary English paper cost 1¾d per lb. ; now it costs 2¾d. In addition to this, freight has more than doubled. The packing was free; now it is 32s 6d per ton. Art paper was 4d per lb., now it is 6d. Imitation art paper was 2¼d and 2½d; now it is 3½d and 4¾d. Calendar paper has raised from 2¾d to 4½d. Ordinary news printing paper has increased by 40 per cent. Heavy increases have also taken place in writing papers, cards, pasteboards and all printers sundries. Sulphide papers, used for wrapping, have risen 100 per cent. *** GOOD morning ! Have you paid your subscription yet ? Perhaps you owe for last year or several years. Now, you understand we don’t need the money; we have hundreds to get. But really it is an imposition to let people go carrying our money when we are so strong and healthy, and so abundantly able to bear the burden ourselves. For this reason we ask anybody who has any of our money in their possession to leave it at the office, or send it by post, freight, train, express, or any other way, just so long as it gets here. Silver and gold are heavy, and it

would be a matter of life long regret to us if anyone should get bowlegged, carrying it about for us. *** WE again call the attention of our readers to the fact that a poll of ratepayers will be held at Frankston, Somerville, and Hastings, on Thursday, February 17th, to decide whether an Order-in-Council shall be granted to the Frankston Gas Company to allow them to establish Electric Light and Power throughout the Shire of Frankston and Hastings. The advantages of electric light are numerous. The public lighting will be more efficient and more economical. The gas company will take all risks, so that the establishment of electric lighting will not cost one penny of the ratepayers’ money. Gas will continue to be made by the Company and no one need, unless he or she desires it, use the electric light, as gas will be supplied privately, as heretofore, if required. The Council hope that a good muster of ratepayers will poll their votes for electricity. The method of voting is peculiar. The law demands that an answer “Yes”’ or “No” shall be made to the following question “Do you desire to forbid the granting of an Order-in-Council to the Frankston Gas Company.” Those therefore who wish to have the electric light must cross out the word yes. *** From the pages of the Mornington Standard, 12 February, 1916

Read all about family fun day FAMILIES will celebrate all that’s good about reading at the Peninsula Reads Family Fun Day, Village Green, Rosebud, on Sunday. The day will show what is happening with books on the Mornington Peninsula and offer a range of free activities, resources and takeaway books. Entertainment will suit families and the day will showcase how the community embraces and supports reading and literacy. Activities include sliding on the inflatable Jurassic Park, or patting a real lizard or crocodile. Those preferring little furry creatures can join the petting zoo. There will be a sausage sizzle and live entertainment by school children and dance clubs. Create your own boomerang, have your body painted with henna or glitter, and join in the fun with free “Life Be in It” games. Dromana CFA will demonstrate a live rescue by cutting up a car at 12.30pm.

“Peninsula Reads is designed to improve literacy levels of families across the shire,” the mayor Cr Graham Pittock said. “Its collaborative approach supports and involves families, early childhood services, schools and the community at large – all of whom have a role to play in promoting literacy and ensuring access to resources that promote literacy development.” Peninsula Reads committee chair Cr Antonella Celi encouraged families to come along. “The Australian Book of World Records is offering us an opportunity to have the most people reading a book at the same time,” she said. “Those attending can also take home a free Disney book and CD. So grab a book, enjoy the activities and celebrate the many fun things about reading,” she said. Peninsula Reads Family Fun Day is 10am2pm, Rosebud Village Green, 932 Point Nepean Rd, Rosebud foreshore (opposite 9th Av).