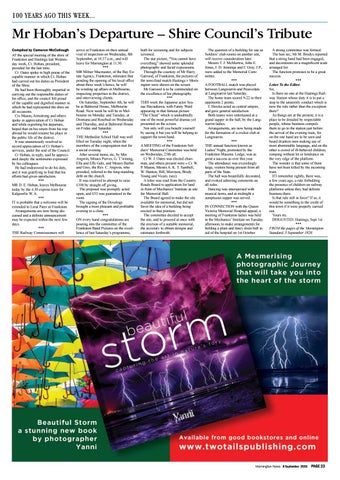 Mr Hoban’s Departure – Shire Council’s Tribute Compiled by Cameron McCullough AT the special meeting of the shire of Frankston and Hastings last Wednesday week, Cr. Hoban, president, presided for the last time. Cr. Oates spoke in high praise of the capable manner in which Cr. Hoban had carried out his duties as President of the Shire. He had been thoroughly impartial in carrying out the responsible duties of his office, and the council felt proud of the capable and dignified manner in which he had represented the shire on all occasions. Crs Mason, Armstrong and others spoke in appreciation of Cr Hoban and while regretting his departure, hoped that on his return from his trip abroad he would resume his place in the public life of the district. It was unanimously resolved to record appreciation of Cr Hoban’s services, under the seal of the Council. Cr Hoban, in reply, said be appreciated deeply the sentiments expressed by his colleagues. He had endeavored to do his duty, and it was gratifying to find that his efforts had given satisfaction. *** MR D. E. Hoban, leaves Melbourne today by the 4.30 express train for Kalgoorlie W. A. *** IT is probable that a welcome will be extended to Lieut Parer at Frankston. Arrangements are now being discussed and a definite announcement may be expected within the next few days. *** THE Railway Commissioners will

arrive at Frankston on their annual visit of inspection on Wednesday, 8th September, at 10.57 a.m., and will leave for Mornington at 11.50. *** MR Milner Macmaster, of the Bay Estate Agency, Frankston, intimates that pending the opening of his local office about three week’s hence, he will be winding up affairs in Melbourne, inspecting properties in the district, and interviewing clients. On Saturday, September 4th, he will be at Balmoral House, Melbourne Road. Next week he will be in Melbourne on Monday and Tuesday, at Dromana and Rosebud on Wednesday and Thursday, and at Balmoral House on Friday and Saturday. *** THE Methodist School Hall was well filled on Tuesday night, when the members of the congregation met for a social evening. After several items, etc, by Mrs Angwin, Misses Purves, G. T’wining, Ella and Effe Gale, and Messrs Barber and Grey, the Rev. C. Angwin, who presided, referred to the long-standing debt on the church. It was resolved to attempt to raise £100 by straight off giving. The proposal was promptly acted upon, and £53 was guaranteed in the room The signing of the Doxology brought a most pleasant and profitable evening to a close. *** ON every hand congratulations are pouring into the committee of the Frankston Band Pictures on the excellence of last Saturday’s programme,

both for screening and for subjects screened. The star picture, “You cannot have everything” showed some splendid photography and facial expressions. Through the courtesy of Mr Harry Garrood, of Frankston, the pictures of the semi-final match Hastings v Mornington were shown on the screen. Mr Garrood is to be commended on the excellence of his photography. *** THIS week the Japanese actor Sessue Hayaukawa, with Fanny Ward appearing in that famous picture “The Cheat” which is undoubtedly one of the most powerful dramas yet presented on the screen. Not only will you benefit yourself by seeing it but you will be helping to support the town band. *** A MEETING of the Frankston Soldiers’ Memorial Committee was held on Wednesday, 25th ult. Cr W. J. Oates was elected chairman, and others present were – Cr. W. P. Mason, Messrs A. K. T. Sambell, W. Hanton, Hill, Morrison, Brody Young and Vicars. (sec). A letter was read from the Country Roads Board re application for land in front of Mechanics’ Institute as site for Memorial Hall. The Board agreed to make the site available for memorial, but did not favor the idea of a building being erected in that position. The committee decided to accept the site, and to proceed at once with the erection of a suitable memorial, the secretary to obtain designs and estimates forthwith.

The question of a building for use as Soldiers’ club rooms on another site, will receive consideration later. Messrs T. J. McMurtrie, John E. Jones, J. D. Jennings and C Gray. J.P., were added to the Memorial Committee. *** A FOOTBALL match was played between Langwarrin and Pearcedale at Langwarrin last Saturday. The home team scored 9-22 to their opponents 2 points. J. Dorcka acted as central umpire, and gave general satisfaction. Both teams were entertained at a grand supper in the hall, by the Langwarrin ladies. Arrangements, are now being made for the formation of a cricket club at Langwarrin. *** THE annual function known as Ladies’ Night, promoted by the Frankston Masonic Lodge, was as great a success as ever this year. The attendance was exceedingly large, visitors being present from all parts of the State. The hall was beautifully decorated, and evoked admiring comments on all sides. Dancing was interspersed with musical items, and at midnight a sumptuous supper was served. *** IN CONNECTION with the Queen Victoria Memorial Hospital appeal, a meeting of Frankston ladies was held in the Mechanics’ Institute on Tuesday afternoon, to make arrangements for holding a plain and fancy dress ball in aid of the hospital on 1st October.

A strong committee was formed. The hon sec, Mr M. Brodys reported that a string band had been engaged, and decorations on a magnificent scale arranged for. The function promises to be a great success. *** Letter To the Editor. Sir, Is there no one at the Hastings Railway Station whose duty it is to put a stop to the unseemly conduct which is now the rule rather than the exception there? As things are at the present, it is a place to be dreaded by respectable people, whose business compels them to go to the station just before the arrival of the evening train, for on the one hand are to be seen and heard drunken men making use of most abominable language, and on the other a crowd of ill-behaved children, romping without let or hindrance on the very edge of the platform. The wonder is that some of them have not been killed by the incoming train. If I remember rightly, there was, a few years ago, a rule forbidding the presence of children on railway platforms unless they had definite business there. Is that rule still in force? If so, it would be something to the credit of this town if it were properly carried out. Yours etc. DISGUSTED. Hastings, Sept 1st *** FROM the pages of the Mornington Standard, 3 September 1920.