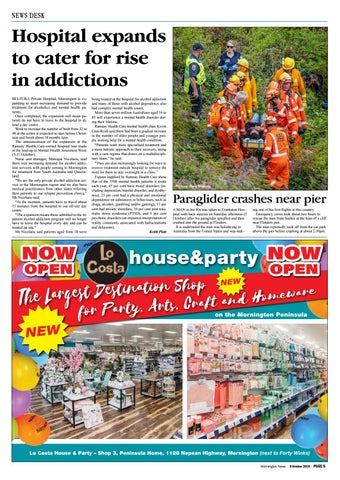 Hospital expands to cater for rise in addictions BELEURA Private Hospital, Mornington is expanding to meet increasing demand to provide treatment for alcoholics and mental health patients. Once completed, the expansion will mean patients do not have to leave to the hospital to attend a day centre. Work to increase the number of beds from 32 to 48 at the centre is expected to start before Christmas and finish about 18 months later. The announcement of the expansion at the Ramsay Health Care-owned hospital was made in the lead-up to Mental Health Awareness Week (5-11 October). Nurse unit manager, Monique Nicolaou, said there was increasing demand for alcohol addiction services with people coming to Mornington for treatment from South Australia and Queensland. “We are the only private alcohol addiction service in the Mornington region and we also have medical practitioners from other states referring their patients to our relapse prevention clinics,” Ms Nicolaou said. “At the moment, patients have to travel about 15 minutes from the hospital to our off-site day centre. “The expansion means those admitted to the inpatient alcohol addiction program will no longer have to leave the hospital every day and can be treated on site.” Ms Nicolaou said patients aged from 18 were

being treated at the hospital for alcohol addiction and many of those with alcohol dependency also had complex mental health issues. More than seven million Australians aged 16 to 85 will experience a mental health disorder during their lifetime. Ramsay Health Care mental health chair Kevin Cass-Ryall said there had been a gradual increase in the number of older people and younger people seeking help for a mental health condition. “Patients want more specialised treatment and a more holistic approach to their recovery, along with a care regime that draws on a multidisciplinary team,” he said. “They are also increasingly looking for ways to receive treatment outside hospital to remove the need for them to stay overnight in a clinic.” Figures supplied by Ramsay Health Care show that of the 5500 mental health patients it treats each year, 45 per cent have mood disorders (including depression, bipolar disorder, and dysthymia); 25 per cent had a physical and emotional dependence on substances or behaviours, such as drugs, alcohol, gambling and/or gaming); 15 per cent had anxiety disorders; 10 per cent post traumatic stress syndrome (PTSD); and 5 per cent psychotic disorders (an impaired interpretation of reality commonly associated with hallucinations and delusions). Keith Platt

Paraglider crashes near pier A MAN in his 30s was taken to Frankston Hospital with back injuries on Saturday afternoon (5 October) after his paraglider spiralled and then crashed into the ground at Flinders. It is understood the man was holidaying in Australia from the United States and was mak-

ing one of his first flights in this country. Emergency crews took about two hours to rescue the man from bushes at the base of a cliff near Flinders pier. The man reportedly took off from the car park above the pier before crashing at about 2.30pm.