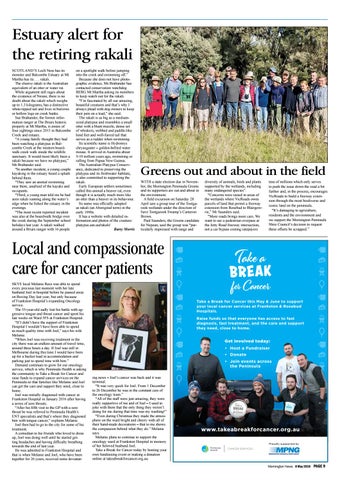 Estuary alert for the retiring rakali SCOTLAND’S Loch Ness has its monster and Balcombe Estuary at Mt Martha has its . . . rakali. The elusive rakali is the Australian equivalent of an otter or water rat. While argument still rages about the existence of Nessie, there is no doubt about the rakali which weighs up to 1.3 kilograms, has a distinctive white-tipped tail and lives in burrows or hollow logs on creek banks. Sue Brabander, the former information ranger at The Briars historic property at Mt Martha, is aware of four sightings since 2015 in Balcombe Creek and estuary. “A young family thought they had been watching a platypus in Balcombe Creek at the western boardwalk creek walk inside the wildlife sanctuary. It would most likely been a rakali because we have no platypus,” Ms Brabander said. “In another incident, a young couple kayaking in the estuary heard a splash behind them. “They saw an animal swimming near them, unafraid of the kayaks and occupants. “Third, a young man told me he had seen rakali running along the water’s edge when he fished the estuary in the evenings. “The most recent reported incident was also at the boardwalk bridge over the creek during the September school holidays last year. A rakali walked around a Briars ranger with 16 people

on a spotlight walk before jumping into the creek and swimming off.” Because she does not have photographic evidence, Ms Brabander has contacted conservation watchdog BERG Mt Martha asking its members to keep watch out for the rakali. “I’m fascinated by all our amazing, beautiful creatures and that’s why I always plead with dog owners to keep their pets on a lead,” she said. The rakali is as big as a mediumsized platypus and resembles a small otter with a blunt muzzle, dense set of whiskers, webbed and paddle-like hind feet and well-furred tail that serves as a rudder when swimming. Its scientific name is Hydromys chrysogaster – golden-bellied water mouse. It arrived in Australia about 5-10 million years ago, swimming or rafting from Papua New Guinea. The Australian Platypus Conservancy, dedicated to preserving the platypus and its freshwater habitats, is also committed to supporting the rakali. Early European settlers sometimes called this animal a beaver rat, even though it is actually much more like an otter than a beaver in its behaviour. Its name was officially adopted as rakali (an Aboriginal term) in the early 1990s. It has a website with detailed information and photos of the creature: platypus.asn.au/rakali/ Barry Morris

Greens out and about in the field WITH a state election due in November, the Mornington Peninsula Greens and its supporters are out and about in the environment. A field excursion on Saturday 28 April saw a group tour of the Tootgarook wetlands under the direction of Save Tootgarook Swamp’s Cameron Brown. Paul Saunders, the Greens candidate for Nepean, said the group was “particularly impressed with range and

diversity of animals, birds and plants supported by the wetlands, including many endangered species”. “Concerns were raised in areas of the wetlands where VicRoads owns parcels of land that permit a freeway extension from Rosebud to Blairgowrie,” Mr Saunders said. “More roads brings more cars. We want to see a pedestrian overpass at the Jetty Road freeway intersection, not a car bypass costing ratepayers

tens of millions which only serves to push the issue down the road a bit further and, in the process, encourages VicRoads to build a freeway extension through the most biodiverse and iconic land on the peninsula. “It’s damaging to agriculture, residents and the environment and we support the Mornington Peninsula Shire Council’s decision to request these offsets be scrapped.”

Local and compassionate care for cancer patients SKYE local Melanie Rees was able to spend every precious last moment with her late husband Joel in hospital before he passed away on Boxing Day last year; but only because of Frankston Hospital’s expanding Oncology service. The 55-year-old sadly lost his battle with aggressive tongue and throat cancer and spent his last weeks on Ward 5FS at Frankston Hospital. “If I didn’t have the support of Frankston Hospital I wouldn’t have been able to spend as much quality time with Joel,” says his wife Melanie. “When Joel was receiving treatment in the city there was an endless amount of travel time, around three hours a day. If Joel was still in Melbourne during this time I would have been up for a bucket load in accommodation and parking just to spend time with him.” Demand continues to grow for our oncology service, which is why Peninsula Health is asking the community to Take a Break for Cancer and raise funds to expand cancer services on the Peninsula so that families like Melanie and Joel can get the care and support they need, close to home. Joel was initially diagnosed with cancer at Frankston Hospital in January 2016 after having a series of sore throats. “After his fifth visit to the GP with a sore throat he was referred to Peninsula Health’s ENT specialists and that’s where they diagnosed him with tongue cancer,” explains Melanie. Joel then had to go to the city for some of his treatment. A comedian to his friends who loved to dress up, Joel was doing well until he started getting headaches and having difficulty breathing towards the end of last year. He was admitted to Frankston Hospital and that is when Melanie and Joel, who have been together for 26 years, received some devastat-

Take a Break for Cancer this May &amp; June to support your local cancer services at Frankston &amp; Rosebud Hospitals. Raise funds so that everyone has access to fast diagnosis, fast treatment, and the care and support they need, close to home.

Get involved today: • Host a Fundraiser • Donate • Join events across the Peninsula ing news – Joel’s cancer was back and it was terminal. “It was very quick for Joel. From 1 December to 26 December he was in the constant care of the oncology team.” “All of the staff were just amazing, they were really supportive of me and of Joel – I used to joke with them that the only thing they weren’t doing for me during that time was my washing!” “Even during Christmas they made the atmosphere on the ward bright and cheery with all of their hand-made decorations – that to me shows the compassion behind what they do.” Melanie says. Melanie plans to continue to support the oncology ward at Frankston Hospital in memory of her beloved husband Joel. Take a Break for Cancer today by hosting your own fundraising event or making a donation online at takeabreakforcancer.org.au.