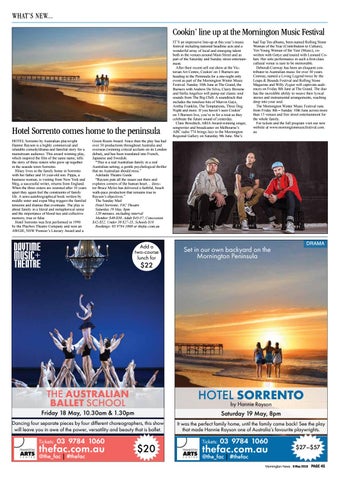 Cookin’ line up at the Mornington Music Festival

Hotel Sorrento comes home to the peninsula HOTEL Sorrento by Australian playwright Hannie Rayson is a highly commercial and relatable comedy/drama and familial story for a mainstream audience. This award winning play, which inspired the film of the same name, tells the story of three sisters who grew up together in the seaside town Sorrento. Hilary lives in the family home in Sorrento with her father and 16 year-old son. Pippa, a business woman, is visiting from New York and Meg, a successful writer, returns from England. When the three sisters are reunited after 10 years apart they again feel the constraints of family life. A semi-autobiographical book written by middle sister and expat Meg triggers the familial tensions and dramas that eventuate. The play is about family in a literal and metaphorical sense and the importance of blood ties and collective memory, true or false. Hotel Sorrento was first performed in 1990 by the Playbox Theatre Company and won an AWGIE, NSW Premier’s Literary Award and a

Green Room Award. Since then the play has had over 50 productions throughout Australia and overseas (winning critical acclaim on its London debut), and has been translated into French, Japanese and Swedish. “This is a real Australian family in a real Australian setting, a gentle psychological thriller that no Australian should miss.” Adelaide Theatre Guide “Rayson puts all the issues out there and explores corners of the human heart… director Bruce Myles has delivered a faithful, beach walk-pace production that remains true to Rayson’s objectives.” The Sunday Mail Hotel Sorrento. FAC Theatre Saturday 19 May, 8pm 120 minutes, including interval Member $40-$50, Adult $45-57, Concession $42-$52, Under 30 $27-35, Schools $18 Bookings: 03 9784 1060 or thefac.com.au

IT’S an impressive line-up at this year’s music festival including national headline acts and a wonderful array of local and emerging talent both in the venues around Main Street and as part of the Saturday and Sunday street entertainment. After their recent sell out show at the Victorian Art Centre, Cookin’ on 3 Burners are heading to the Peninsula for a one-night only event as part of the Mornington Winter Music Festival. Sunday 10th June at The Grand, the Burners with Andrew De Silva, Clairy Browne and Stella Angelico will pump out classic soul sounds from The Big Chill. A soundtrack that includes the timeless hits of Marvin Gaye, Aretha Franklin, The Temptations, Three Dog Night and more. If you haven’t seen Cookin’ on 3 Burners live, you’re in for a treat as they celebrate the future sound of yesterday. Clare Bowditch, ARIA Award-winning singer, songwriter and broadcaster on Melbourne’s ABC radio 774 brings Jazz to the Mornington Regional Gallery on Saturday 9th June. She’s

had Top Ten albums, been named Rolling Stone Woman of the Year (Contribution to Culture), Yen Young Woman of the Year (Music), cowritten with Gotye and toured with Leonard Cohen. Her solo performance in such a first-class cultural venue is sure to be memorable. Deborah Conway has been an eloquent contributor to Australian music for over 30 years. Conway, named a Living Legend twice by the Leaps &amp; Bounds Festival and Rolling Stone Magazine and Willy Zygier will captivate audiences on Friday 8th June at The Grand. The duo has the incredible ability to weave their lyrical stories and instrumental arrangements, reaching deep into your soul. The Mornington Winter Music Festival runs from Friday 8th – Sunday 10th June across more than 15 venues and free street entertainment for the whole family. For tickets and the full program visit our new website at www.morningtonmusicfestival.com. au

Set in our own backyard on the Mornington Peninsula

Dancing four separate pieces by four different choreographers, this show will leave you in awe of the power, versatility and beauty that is ballet.

It was the perfect family home, until the family came back! See the play that made Hannie Rayson one of Australia’s favourite playwrights.