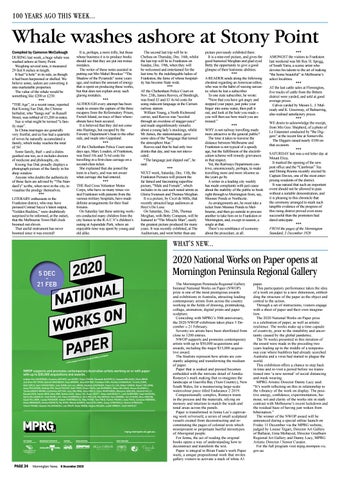 Whale washes ashore at Stony Point Compiled by Cameron McCullough DURING last week, a huge whale was washed ashore at Stony Point. Weighing several tons, it measured 29 feet 8 inches in length. It had “a hole” in its side, as though it had been harpooned or shelled. We believe some, sailors are converting it into marketable properties. The value of the whale would be something like £200 or £250. *** “THE Age”, in a recent issue, reported that Kwong Sue Duk, the Chinese herbalist, who “hangs out” in Russell Street, was robbed of £1,200 in notes. Sue is what might be termed “a family man”. In China marriages are generally very fruitful, and as Sue had a quartette of wives he naturally accumulated a family, which today reaches the total of 56! Some family, that! – and a distinguished one too, as it includes doctors of medicine and philosophy, etc. Kwong Sue Duk proudly displays a photograph picture of the family in his shop window. Anyone who doubts the authenticity of these facts are advised by “The Standard’s” scribe, when next in the city, to visualise the prodigy themselves. *** LITERARY enthusiasts in the Frankston district, who may have perused Conrad Sayce’s latest output, “Golden Buckles,” were doubtlessly surprised to be informed, at the outset, that the Melbourne Town Hall clock boomed out eleven. That useful instrument has never boomed since it was erected!

It is, perhaps, a mere trifle, but those whose business it is to produce books should see that they are put out minus mistakes. The writer of these notes assisted in putting out Mrs Mabel Brookes’ “The Shadow of the Pyramids” some years ago, and realises the amount of energy that is spent on producing these works, but that does not explain away such glaring mistakes. *** ALTHOUGH every attempt has been made to ensure the capture of the three escapees from the Reformatory Prison, French Island, no trace of their whereabouts have been secured. It is believed that they did not come into Hastings, but escaped by the Forestry Department’s boat to the other side, and made into Gippsland. *** AT the Cheltenham Police Court some days ago, Mary Louden, of Frankston, was fined 10s and 7s 6d costs for travelling in a first-class carriage on a second-class ticket. She explained that she joined the train in a hurry, and was not aware what carriage she had entered. *** THE Red Cross Volunteer Motor Corps, who have so many times visited Frankston with patients from the various military hospitals, have made definite arrangements for their final fixtures. On Saturday last these untiring workers conducted many children from the city homes to the R.A.C.V’s children’s outing at Aspendale Park, where an enjoyable time was spent by young and old alike.

The second last trip will be to Chelsea on Thursday, Dec. 16th, whilst the last trip will be to Frankston on Sunday, Dec. 19th, when they will be welcomed and entertained for the last time by the indefatigable ladies of Frankston, the fame of whose hospitality has become State wide. *** AT the Cheltenham Police Court on Nov. 25th, James Reeves, of Bentleigh, was fined £5 and £1 4s 6d costs for using indecent language at the Carrum railway station. William Young, a North Richmond carrier, said Reeves was “sozzled through an overdose of stagger-juice” and made ungentlemanly remarks about a young lady’s stockings, whilst Mr James, the stationmaster, gave some idea of the “language that turned the atmosphere blue.” Reeves said that be had only two drinks that day, and was not intoxicated. “The language just slipped out”, he said. *** NEXT week, Saturday, Dec. 11th, the Frankston Pictures will present the far famed and fascinating superfine picture, “Male and Female”, which includes in its cast such noted artists as Gloria Swanson and Thomas Meighan. It is a picture, by Cecil de Mills, that recently attracted large audiences at Hoyt’s De Luxe. On Saturday, Dec. 25th, Thomas Meighan, with Betty Compson, will be featured in “The Miracle Man”, easily the greatest picture produced for many years. It was recently exhibited, at The Auditorium, and went better than any

picture previously exhibited there. It is a nine-reel picture, and gives the good humored Meighan and glad eyed Betty the opportunity to give a good glimpse of their histrionic abilities. *** A READER sends along the following chestnut regarding an American editor, who was in the habit of waxing sarcastic when he lost a subscriber. To one irate subscriber, he wrote: “Now that you have got angry and stopped your paper, just poke your finger into some water, then pull it out, and look at the hole you made – you will then see how much you are missed.” *** WHY is not railway travelling made more attractive to the general public? The time it takes to traverse the distance between Melbourne and Frankston is not typical of a speedy age, but the fulfillment of the electrification scheme will remedy grievances in that respect. Yet, the Railways Department contrive, unconsciously, perhaps, to make travelling more and more irksome as the years go by. A writer in a leading city weekly has made complaints with just cause about the inability of the public to book right through to Mornington from, say, Moonee Ponds or Northcote. As arrangements are, he must take a ticket from Moonee Ponds to Melbourne, and then go outside to procure another to take him on to Frankston or Mornington, and, except in season, a single at that. There’s no semblance of economy about the procedure, at all.

*** AMONGST the visitors to Frankston last weekend was Mr Roy H. Sprigg, of South Yarra, a scenic artist who devotes his talents to the art of making “the home beautiful” in Melbourne’s select localities. *** AT the last cattle sales at Flemington, five trucks of cattle from the Bittern district were yarded, and sold at good average prices. Calves yarded by Messrs L. J. Mulready and K. Greenway, of Balnarring, also realised satisfactory prices. *** WE desire to acknowledge the receipt, from Mrs Geo. Shepherd, of a photo of Le Estaminet conducted by “the Diggers” at the recent fete at Somerville. The Diggers raised nearly £100 on that occasion. *** SATURDAY last was a red letter day at Mount Eliza. It marked the opening of the new post office and the “Cambrian” Tea and Dining Rooms recently erected by Captain Davies, one of the most enterprising residents of the district. It was natural that such an important event should not be allowed to pass without a suitable demonstration, and it is pleasing to this chronicle that the ceremony arranged to mark such tangible evidence of the progress of this rising district proved even more successful than the promoters had dared anticipate. *** FROM the pages of the Mornington Standard, 3 December 1920

The Mornington Peninsula Regional Gallery biennial National Works on Paper (NWOP) prize is one of the most prestigious awards and exhibitions in Australia, attracting leading contemporary artists from across the country working in the fields of drawing, printmaking, collage, animation, digital prints and paper sculpture. Coinciding with MPRG’s 50th anniversary, the 2020 NWOP exhibition takes place 5 December – 21 February. Seventy-six artists have been shortlisted from close to 1200 entries. NWOP supports and promotes contemporary artists with up to $50,000 acquisitions and awards, including the major $15,000 acquisitive award. The finalists represent how artists are constantly adapting and transforming the medium of paper. Paper that is soaked and pressed becomes embedded with the intricate detail of Annika Romeyn’s mark making that re-imagines the landscape at Guerilla Bay (Yuin Country), New South Wales, for a mesmerising large-scale watercolour piece titled Endurance 2 2019. Compositionally complex, Romeyn trusts in the process and the materials, relying on memory and intuition to match the wash and tonal areas across the panels. Paper is transformed in Jenna Lee’s captivating work re/verse/d, a series of small sculptural vessels created from deconstructing and reconstituting the pages of colonial texts which misrepresent or perpetuate hurtful stereotypes of Aboriginal people. For Jenna, the act of reading the original books opens a way of understanding how to deconstruct and transform the text. Paper is integral to Brian Fuata’s work Paper waits, a unique propositional work that invites gallery visitors to activate a stack of white A1

paper. This participatory performance takes the idea of a work on paper to a new dimension, embedding the structure of the paper as the object and central to the action. Through a set of instructions, visitors engage with a sheet of paper and their own imagination. The 2020 National Works on Paper prize is a celebration of paper, as well as artistic resilience. The works make up a time capsule of creativity, prior to the instability and uncertainty caused by the global pandemic. The 76 works presented in this iteration of the award were made in the preceding two years leading up to the middle of a tempestuous year where bushfires had already scorched Australia and a virus had started to plague the world. This exhibition offers a chance to step back in time and re-visit a period before we transitioned into ‘a new normal’ of social distancing and mask wearing. MPRG Artistic Director Danny Lacy said: “It’s worth reflecting on this in relationship to the vibrancy of the work on display. The positive energy, confidence, experimentation, humour, wit and clarity of the works sits in stark contrast with Melbourne’s recent lockdown and the residual haze of having just woken from hibernation.” The winner of the NWOP award will be announced during a special online launch on Friday 11 December via the MPRG website, judged by Louise Tegart, Director Art Gallery of Ballarat, Gina Mobayed, Director Goulburn Regional Art Gallery and Danny Lacy, MPRG Artistic Director / Senior Curator. For the full program visit mprg.mornpen.vic. gov.au